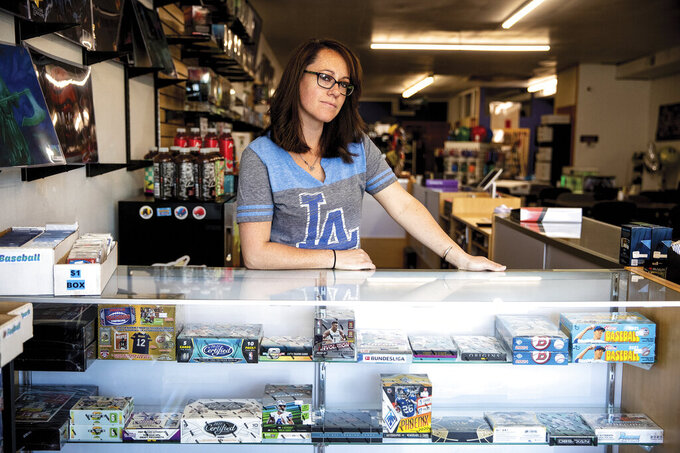 Mike Moore, ASSOCIATED PRESS
Jessie Studle, owner of Dungeons and Dugouts, poses at the counter of her store in Gillette, Wyo., on Friday, June 4, 2020. A boom in trading cards brings in new customers but higher prices can keep others from taking part in the hobby, Studle said. (Mike Moore/Gillette News Record via AP)

GILLETTE, Wyo. (AP) — In a year when sports and trading card collecting has set records and sold out of stores, four athletes known by a single name top the list of most popular cards, joined by an unlikely addition.

The lovable anime Pokemon fire dragon hardly seems to fit with the other four basketball legends. But its popularity is a wake-up call that card collecting isn’t just for sports fans anymore.

Earlier this year, eBay released its “State of Trading Cards” report that notes a 142% rise in domestic sales and 162% increase in global trading card sales. The same report shows that Pokemon card sales increased 574% from 2019 to 2020, with Charizard standing out as its most popular card.

At the end of April, a LeBron James 2003-04 Upper Deck Exquisite rookie patch autograph card sold for $5.2 million, tied with a 1952 Topps Mickey Mantle card, which also sold for $5.2 million, as the most expensive sports cards ever sold. The most expensive, that is, until this past weekend when a 1914 Babe Ruth pre-rookie card sold for a record $6 million, the Gillette News Record reports.

Luka Doncic (basketball) and Mike Trout (baseball) cards also entered that pricey stratosphere, selling for $4.6 million and $3.9 million respectively as the next highest-priced sports card purchases, all of which sold in the past 12 months.

Now people are rifling through attics and sending prayers that their old card collections were spared in their parents’ spring cleaning efforts, all in hopes of having an old cardboard cutout that could be the hobby’s next hidden gem.

The national trend has also made its way to Gillette card collectors, but on a lesser scale. The past year has seen a boom in sports and Pokemon card collecting and value that has created a marketplace and industry that Dungeons and Dugouts owner Jessie Studle is still trying to make sense of.

While none of those million dollar cards have crossed Dungeons and Dugouts counter lately, the overall value of single sports and Pokemon cards, along with the unopened boxes of card packages, have shot-up over the past year.

The store’s high-end boxes near the $1,000 price point, a number that’s pricing some collectors out of the hobby.

A new generation of buyer has emerged on the national scene over the course of the COVID-19 pandemic. Similar to how stocks are bought and sold at fluctuating values, sports cards have operated similarly. Collectors are doubling as investors and vice versa, treating the sports card market as an asset market similar to those for artwork or coins.

On the highest level of the boom, for those investors spending millions on Mickey Mantle and LeBron James cutouts, it is a way of hedging their other holdings, similar to collecting art work. A combination of Americana, nostalgia and scarcity found in rare sports cards create value that can hold, or potentially grow, over time.

That record-breaking Babe Ruth pre-rookie card was snagged by an anonymous buyer, but the group Collectable reports the buyer will allow people to buy shares of the card at $3 a share. The unique model of collectable card investment is a “seismic moment for the sports collectibles industry,” said Ezra Levine, Collectable CEO, in a press release.

Studle said some of her customers have dropped off lately, likely from being priced out of the market, but it’s been made up, to an extent, by those who have been newly drawn to the hobby during the boom.

The store is now stocking half the sports card boxes it normally would because of how expensive it’s become to have too much inventory sitting on shelves.

Other than Walmart, there is no other sports or hobby card retailer in Gillette, although when it comes to sports cards, Walmart sells different boxes than the more specialized items Dungeons and Dugouts has access to, Studle said.

While boxes of cards fly off the shelves at Walmart and Target stores across the country, that hasn’t been a problem at Dungeons and Dugouts. As a local retailer, its specialized items have risen in price beyond Studle’s and other mom-and-pop shop retailers’ control.

Too much of a good thing

Frankly, Studle said she and others who have observed the sports card market for decades can’t explain the national craze and subsequent rise in sales.

But whatever its cause, she said it’s bad for the hobby.

So many new collectors have entered the market, combined with renewed interest from the more long-term stalwarts, that demand for card grading services also has grown to the point that the leading company stopped taking orders.

Graded cards are officially certified and given a 1 through 10 rating based on condition, which can authenticate and significantly increase the value of many cards. In May, Professional Sports Authenticator — the gold standard for card grading — announced that it would stop taking orders until July as it catches up on the “avalanche” of orders it’s received, according to a company statement.

However, it will still accept expedited shipments, which Studle said run about $300.

One theory for the inflation in sports and Pokemon cards is that the collectibles have taken on “stimulus value.” Basically, she said that it may be that more people entering the market with more money to spend on items they normally would not buy may have created somewhat of a bubble in the hobby industry.

“My opinion on that, though, is why would you get into a hobby when it’s at its absolute peak trying to make an investment in it?” Studle said. “If you’ve been collecting for years, you’re absolutely sitting in a great spot right now because you can flip all that stuff you’ve been sitting on.”

The boom is different in Gillette and Studle’s shop than it is nationwide. The city doesn’t have the customer base to support what’s happening in more populated parts of the country. There is less likely to be a shortage of buyers for overpriced boxes out of the hundreds of thousands of people in Denver compared to the thousands in Gillette.

But sports cards aren’t the main part of Studle’s business. When it first opened almost seven years ago, sports cards and memorabilia took up a larger share of the store, but over time that’s flipped. Tabletop gaming like Dungeons & Dragons, along with Pokemon and Magic: The Gathering games drew in more customers and eventually took over the lion’s share of the store.

The sports cards are sectioned off into a corner of the store’s counter, closest to the door. But stepping beyond that opens up a world of tabletop game guides, Warhammer 40,000 figurines and rows and rows of Magic and Pokemon cards. And while sports and Pokemon are hot now, Magic: The Gathering cards also can draw huge bids from fans and players of the game. In January, the game’s most sought-after card, a 1993 Black Lotus, sold for more than $511,000.

Enveloped in clear cases under the glass counter — displayed like a jewelry shop — individual sports, Pokemon and Magic: The Gathering cards are on display. The numbers on their price tags have mostly shot up over the past year as interest in the hobbies has grown.

Dalton McInerney, 20, said he has been collecting Pokemon cards since he was 8 years old, but recently transitioned more toward playing Magic: The Gathering.

While he mostly spends his money on buying the less scarce boxes of Magic cards, he said he will still splurge on Pokemon when the opportunity arises.

The demand for Pokemon cards has overmatched production so much that Studle can’t even order them anymore. When she does get shipments, they show up on her invoices as a happy surprise. Even her longtime distributors don’t know when to expect boxes of Pokemon packs to show up. When they do, distributors divvy them up among their stores, who then divvy them up among customers.

Lately, she has limited customers to one Pokemon product per person when new shipments come in. As limited as the Pokemon card supply is in the community, she said she wants to spread the product to as many customers as she can.

“With Pokemon, I think it’s very much a supply and demand issue,” Studle said. “Pokemon company, over the past year, has had a really hard time keeping up with all the demand that they have. So when we get product in, it flies. You can’t keep it in. In fact, we have to limit it to one or two boxes when they come in or the first guy in the door will buy it all.”

As the card craze continues, Studle and other longtime hobbyists will continue adapting to and trying to make sense of the turbulence in the card collecting industry.

But how long it will last, or if it will ever end, remains to be seen.

“I don’t think that it can stay like this for long, but then again I could be wrong,” Studle said. “I’ve never seen it do this, so I don’t know how long it lasts or when it stops.”