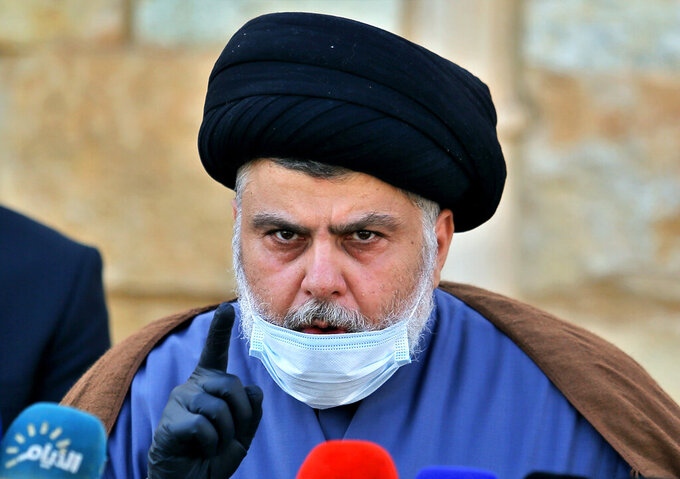 Anmar Khalil, ASSOCIATED PRESS
FILE - Influential Shiite cleric Muqtada al-Sadr speaks during a press conference in Najaf, Iraq, Wednesday, Feb. 10, 2021. Speaking at a rare press conference Thursday, Nov. 18, 2021, al-Sadr, who emerged as a winner in last month’s general elections, called on the country's myriad Shiite armed factions to disband if they want to join the next government. He has also asked them to over their weapons to a government-sanctioned umbrella group, known as Popular Mobilization Forces. (AP Photo/Anmar Khalil, File)

BAGHDAD (AP) — Iraq’s influential Shiite cleric who emerged as a winner in last month’s general elections on Thursday called on the country’s myriad pro-Iran Shiite armed factions to disband if they want to join his upcoming government.

Muqatada al-Sadr also asked the factions to hand over their weapons to the government-sanctioned umbrella known as Popular Mobilization Forces. In turn, he also asked the PMF to “purify” its ranks from “undisciplined elements” and surrender “corrupt individuals” to the judiciary.

The militias are certain to reject the demands, which in turn could complicate al-Sadr’s efforts to form a government after the vote. It could also increase tensions between Shiites who support the pro-Iran factions and al-Sadr’s own followers.

The pro-Iran factions lost a significant number of parliament seats in the Oct. 10 elections and have called the vote fraudulent, rejecting the results. Their supporters have held protests outside Baghdad’s heavily fortified Green Zone, home to government offices and foreign embassies.

The protests turned deadly earlier this month, when demonstrators tried to enter the Green Zone, demanding a ballot recount. One protester affiliated with the militias was killed in an exchange of fire, for which the militias blamed Iraq's incumbent Prime Minister Mustafa al-Kadhimi.

Tensions were further ratcheted up after a failed assassination attempt against al-Kadhimi at his residence the next day. The prime minister suffered a light cut and several of his guards were injured in the Nov. 7 attack by armed drones on his Green Zone residence. There was no responsibility claim for the attack, although suspicion immediately fell on the armed factions.

“Your losses can’t be a pretext for ruining the democratic process,” al-Sadr said at a rare press conference Thursday, addressing the factions.

Political analyst Ihsan al-Shammari, who heads the Iraqi Political Thinking Center in Baghdad, said al-Sadr's comments underscored “clear and deep Shiite divisions," which will not help speed up the formation of a new government. Shiite armed factions serve as Iran's arms in Iraq, he said, and are being used to pressure political leaders.

As the winner in the elections, al-Sadr’s bloc will seek coalition partners and name the next prime minister. The protests staged by supporters of hard-line Iran-aligned militias appeared to be aimed at pressuring al-Sadr to ensure that they are part of the next Cabinet.

But al-Sadr's call on Thursday practically ruled that out, instead asking the armed factions who function outside the PMF to disband.

The PMF is an umbrella group of mostly Shiite groups officially under the prime minister’s command. It was created during the war against the Sunni extremist Islamic State group, which in 2014 seized large swaths of western and northern Iraq. IS was eventually defeated but the thousands of mainly Shiite paramilitary fighters who fought against it never disbanded or surrendered their arms.

Some of the most Iran-friendly militias under the PMF have shown signs of splintering into new, previously unknown groups, allowing them to claim attacks targeting U.S. interests under different names to mask the extent of their involvement.

A senior official with Kataib Hezbollah, one of the hard-line pro-Iran-militias, said he welcomed in principle al-Sadr's call to hand over weapons. But that can only happen, Abu Ali Al-Askari said, after al-Sadr's own armed group, Saraya al-Salam, surrenders its weapons, as Iraqi Kurdish peshmerga fighters should also do.

"Only after these two things happen can the project of limiting arms in the hands of the state succeed," Al-Askari said.

Al-Sadr commands the devotion of millions of Iraqis, including those who fought in his former Mahdi Army militia, a force that battled U.S. troops in the early days of the U.S.-led occupation. In 2014, al-Sadr revamped the militia under the name the Peace Brigades — Saraya Salam — that fought against Islamic State militants.

He recently announced the closure of the offices of his Saraya al-Salam fighters in various provinces — a largely symbolic move apparently meant to show he is serious about bringing all arms under state control.