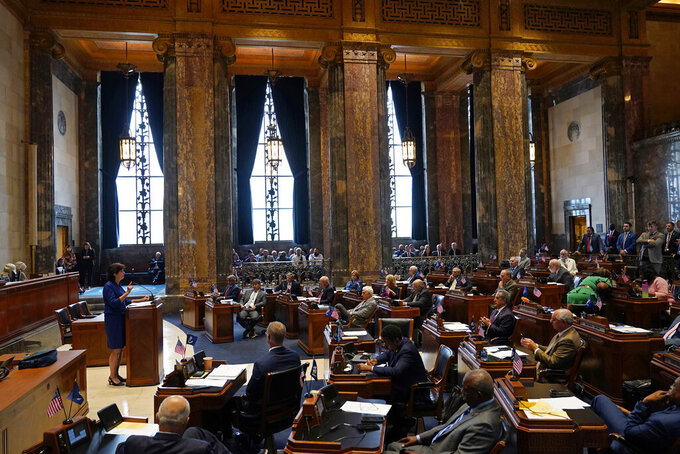 BATON ROUGE, La. (AP) — For all the hype, Louisiana's first veto override session under the state's nearly 50-year-old constitution turned out to be a bit of a dud.

Republican lawmakers got the votes to hold the unprecedented session and can point to that as a continued expansion of their recent flexing of constitutional authority. But they couldn't get enough votes in the House to overturn a single bill rejection issued by Gov. John Bel Edwards, reminding voters that a Louisiana governor — even a Democratic one — still carries power.

Politicians, journalists and government watchers will be sifting through the two-day session's wreckage to determine what it means for future legislative work, relationships between lawmakers and Edwards, upcoming elections and the redrawing of political maps.

What's already clear is the veto session further ratcheted up tensions in the already-divided House, and partisan feuds are likely to intensify after Democrats in a near-bloc rallied to uphold Edwards' vetoes even on bills they backed in the regular session.

“The vote was about the governor,” said Rep. Tanner Magee, the Houma Republican who is the House's second-ranking lawmaker. “It’s definitely going to change the way it’s been in the last two years. I think things got more partisan. That’s not my own personal desire. That’s the feeling, that it’s now Republicans versus Democrats.”

Threats of recall efforts, lost leadership posts and future election opponents are being issued about Democrats and a few Republicans who voted in the regular session to loosen restrictions on concealed handguns and to enact a ban on transgender girls playing school sports but who refused to reverse the governor's vetoes of those bills.

Republican legislative leaders are trying to spin the string of losses in the veto session as not the only point of the gathering, describing the holding of the session as a success of sorts. Still, there's no way to deny that some GOP lawmakers arrived at the Capitol with pledges that Edwards' vetoes could be overturned, only to find they couldn't accomplish anything.

House Republican leader Blake Miguez drove a truck to the Capitol that had a giant elephant statue perched in the back above a tailgate that read: “My name is Gumbeaux. I am here to veto override Governor John Bel Edwards.”

House Speaker Clay Schexnayder was even bolder. The day before the veto session began, Schexnayder said he was “comfortable 100%” that his chamber had the votes to overturn the governor's rejection of the transgender sports ban legislation — even though the House doesn't have enough Republicans to reach a two-thirds vote to override a veto on its own.

Not only did the House speaker end up unable to follow through on his prediction, but his House couldn't deliver the vote required for an override while Senate Republicans — who represent two-thirds of their chamber — narrowly got the votes they needed.

That difference is more notable because Schexnayder came out strongly in support of holding the veto session to override the transgender sports ban veto. Republican Senate President Page Cortez was more publicly reserved in his statements.

As he celebrated his victory, Edwards tried to strike a conciliatory tone. While he said he believed lawmakers reached the right decision to uphold his vetoes and acknowledged using some strong-arm political tactics, the Democratic governor tried to downplay the partisan overtones.

After all, he still faces a majority-Republican House and Senate.

“They’re still people that I intend to work with to move Louisiana forward over the next two-and-a-half years of the remainder of this term," Edwards said. “We just had disagreements.”

But talk of bipartisanship seemed to be a stretch.

State GOP Chairman Louis Gurvich issued an angry statement insisting “there must be consequences” for the Democrats and independents — and Kenner Republican Rep. Joe Stagni — who refused to override the veto of the transgender sports ban measure.

Gurvich called on Schexnayder to replace all Democratic committee chairmen and threatened “a broader conversation about how the House of Representatives is run” if the House speaker didn't make such changes.

Schexnayder also wasn't talking about bipartisanship after his loss, issuing a statement saying: "Veto sessions should be the norm from now on.”