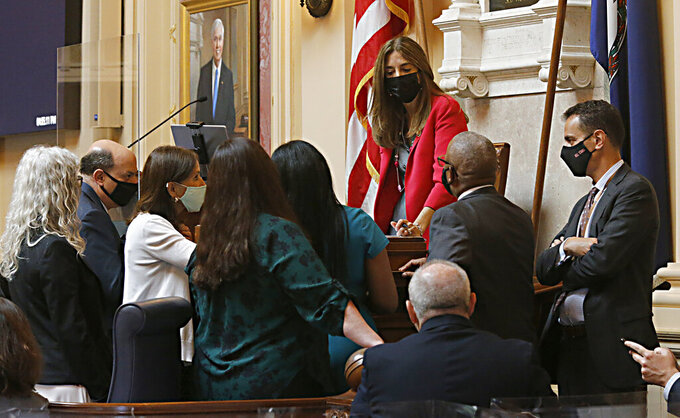 BOB BROWN, ASSOCIATED PRESS
House staff and Democratic members of the House of Delegates gather around the desk of Speaker Eileen Filler-Corn, D-Fairfax, center, before the budget bill was voted on at the Virginia State Capitol in Richmond, Va., Tuesday, Aug. 3, 2021, on the second day of the General Assembly Special Session. (Bob Brown/Richmond Times-Dispatch via AP)

RICHMOND, Va. (AP) — A key protection against evictions would be restored and a new round of funding would flow to utilities to cover unpaid customer bills under legislation advancing through the Democrat-controlled Virginia General Assembly.

Those provisions are among a host of other priorities lawmakers are considering this week as they meet in Richmond for a special session to allocate billions of dollars in federal coronavirus relief, intended to cover pandemic response needs and bolster the economy.

The budget legislation, which received initial approval in the House and Senate on Wednesday, reinstates what housing advocates say was a significant protection against eviction that expired at the end of June: a requirement that a landlord must have applied for rental assistance on their tenant's behalf before an eviction for non-payment of rent can proceed.

While the protection does not amount to an eviction moratorium, housing advocates had worried that evictions would surge, and homelessness could eventually follow, if landlords didn't face a requirement to tell tenants about the relief money.

Martin Wegbreit, director of litigation for the Central Virginia Legal Aid Society, said it makes sense for landlords to handle the applications.

“They’re the ones who know who’s behind (on rent), and they are the ones who will end up with the money," Wegbreit said. “And that will keep them paid and keep tenants staying in their apartments.”

As of July 14, more than $308 million had been paid out statewide to support more than 48,000 households, according to the Virginia Department of Housing and Community Development.

The protection would take effect after the bill is passed and signed by Gov. Ralph Northam, and it would remain in place through June 30 of next year, under the version of the budget that advanced out of the House and Senate money committees Monday.

The deliberations in Virginia come after the Biden administration allowed a federal moratorium on evictions to expire over the weekend. The Centers for Disease Control and Prevention on Tuesday issued a new moratorium that would last until Oct 3.

Michael Hipps, an attorney representing various landlords in Virginia’s Hampton Roads region, said that shifting the onus back on to landlords to apply for rental assistance would not be “terribly burdensome” for large-scale landlords.

But he said it could pose a challenge to landlords who only have one or two properties. They would have to navigate the application process without many resources, he said.

Also in the Democrats' budget plan is a new round of funding to cover certain unpaid water, electric, natural gas or other utility bills. It would allocate $120 million to provide assistance to residential utility customers with accounts over 60 days past due.

The State Corporation Commission would establish an application process to distribute the funds directly to utilities, according to the legislation. Funding is to be awarded proportionally based on the total amount of money owed.

The SCC doesn’t currently have an accounting of what's owed, spokesman Ken Schrad said. The legislation directs the state to undertake one.

Utilities may ask customers to attest that they have experienced a financial hardship due to the pandemic, according to the bill. They are not required to do so.

Dominion Energy Virginia, the state's largest electric monopoly, is excluded from the funding.

State regulators have routinely found that the company has over-earned, but Dominion has pushed through legislation in recent years that limited state regulators’ ability to mandate refunds or rate reductions.

Instead of allowing Dominion to tap into the new pool of money, the budget contains language that says Dominion cannot disconnect certain low-income customers until March 1 of next year.

Rayhan Daudani, a Dominion spokesman, said the company has flexible payment options even for customers who don't fall into that category.

In addition to the rent and utility provisions aimed at helping Virginians, the budget also allocates money for various state agencies to pay for costs associated with the pandemic, including $34.8 million for the Department of Corrections to cover ongoing COVID testing, the purchase of personal protective equipment and the expansion of telehealth services and video visitation.

It further provides $20 million to the Department of Health to provide targeted outreach on COVID-19 vaccines in hard-to-reach communities; $10 million to backfill COVID-related revenue shortfalls at veterans’ care centers; and $15 million over two years to address Medicaid eligibility re-evaluations, appeals and operational backlogs at the Department of Medical Assistance Services due to COVID-19.

The budget also contains language clarifying that a state law prohibiting the wearing of masks in certain places doesn’t apply to Virginians wearing a face covering to prevent the spread of COVID-19. The issue had been an area of some ambiguity since Virginia's state of emergency due to the pandemic lapsed at the end of June.