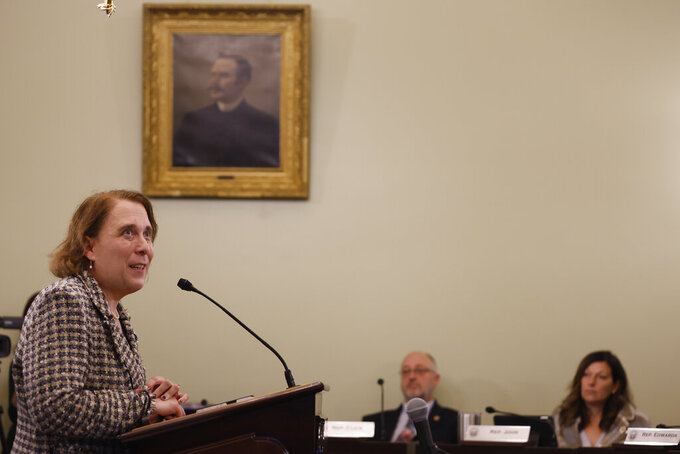 The Dayton native, who was the first transgender person to qualify for the TV game show's “Tournament of Champions,” testified Wednesday at a legislative committee hearing on a bill that would ban gender reassignment surgery for children under the age of 18.

The latest version of the measure would allow hormone therapies and puberty blockers for minors only if they meet specific requirements, including being screened for abuse and mental health conditions. They also must have received at least two years of counseling related to gender dysphoria, mental health and the risks of gender transition.

Doctors could face professional discipline and civil lawsuits for violations if the bill is passed by the Republican-led Legislature and signed into law.

Schneider told lawmakers that opponents and supporters of the bill share the same goal: wanting to protect children. However, Schneider cautioned that enacting this bill would prove dangerous to some children.

“I’m not asking you to do anything except not pass a bill that expands the government’s reach,” Schneider said, “to not restrict the freedom of families and doctors and communities to decide for themselves what their children need, without a bunch of politicians in Columbus getting involved in everyone’s private business.”

Schneider testified that receiving gender-confirming care is the best thing that has happened to her, and that she never regretted it since transitioning five years ago. She credits it for her success on “Jeopardy!” saying she would not have been able to pursue her goals without it.

One of the bill’s sponsors, GOP Rep. Gary Click, previously said the legislation is about making sure that children’s “rights to choose” whether or not they will participate in gender-confirmation procedures or therapies is saved for after they turn 18. He said that's when they are “best able to provide informed consent.”

In June, Republicans in the Ohio House passed legislation that bars transgender girls from competing in school sports. However, the fate of that bill is not clear. The Senate hasn't considered it. GOP Gov. Mike DeWine has questioned the need for such a ban, and said it should be handled by leagues and athletic associations.

Hendrickson is a corps member for the Associated Press/Report for America Statehouse News Initiative. Report for America is a nonprofit national service program that places journalists in local newsrooms to report on undercovered issues.