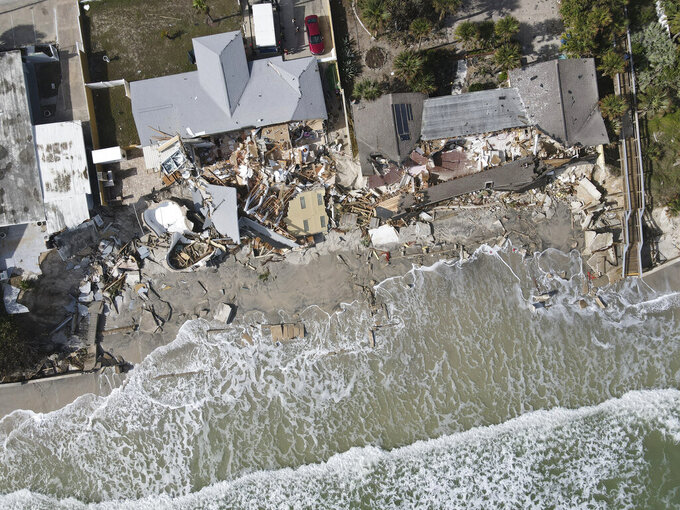 Rebecca Blackwell, ASSOCIATED PRESS
Waves lap the eroded beach below the half-collapsed homes of Nina Lavigna, at left, and her neighbor, after Hurricane Nicole swept away sand from the beach and from under foundations, Saturday, Nov. 12, 2022, in Wilbur-By-The-Sea, Fla. (AP Photo/Rebecca Blackwell)

The damages from the category 1 storm in Volusia County, home to Daytona Beach, exceeded those from the much stronger Hurricane Ian, which caused $377 million in the county, officials said. Hurricane Ian, a category 4 storm, made landfall in southwest Florida in late September and tore across the state.

Moody’s Investors Service estimated insured losses from Ian at between $40 billion and $70 billion in Florida and North Carolina. There were 137 deaths attributed to Ian, a state medical examiners board reported Monday.

Daytona Beach Shore by far had the most property damage in the county, estimated at $370.3 million, according to the Volusia County Property Appraiser. It was followed by New Smyrna Beach at $51.1 million and Daytona Beach at $50 million.

The property appraiser's office warned that those figures would likely rise as more buildings are inspected.

For storm-weary Floridians, Nicole was the first November hurricane to hit their shores since 1985 and only the third since record-keeping began in 1853.

The storm was blamed for five deaths in Florida. A man and a woman were killed by electrocution when they touched downed power lines in the Orlando area. Also in Orange County, one man died in a vehicle crash, and a male pedestrian was struck and killed by a vehicle because of poor road conditions. Another man died as waves battered his yacht against a dock in Cocoa, despite efforts to resuscitate him by paramedics who managed to get on board as the boat broke away from its moorings.