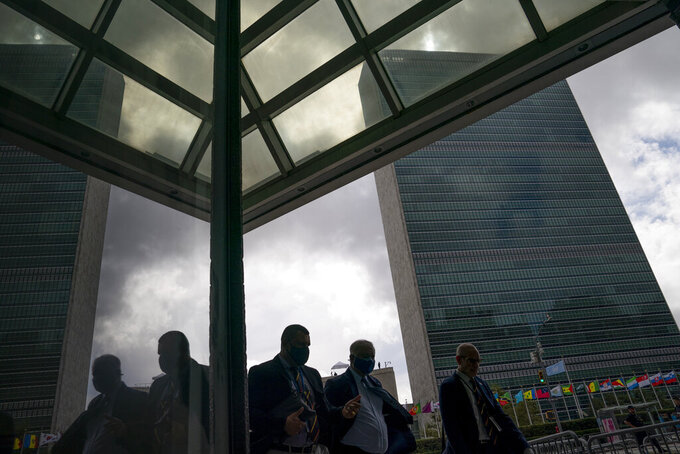 UNITED NATIONS (AP) — Ethiopia told the international community Saturday to steer clear of sanctions and avoid meddling over its war with forces from its Tigray region, and to let the African Union work on bringing all parties together.

“Prescriptions and punitive measures never helped improve situations or relations,” he said, less than 10 days after the United States threatened to impose sanctions against Prime Minister Abiy Ahmed and other leaders if they don’t take steps soon to stop the fighting.

“While cooperation and concern from our friends is welcome, we underline the need to employ constructive approach, cultivate trust and ensure understanding,” Mekonnen said, complaining that his country was facing a “unilateral coercive measure" without mentioning its source.

The U.S. mission to the United Nations didn't immediately respond to a request for comment.

War erupted in Tigray in November after a political clash between Abiy and the Tigrayans who had long dominated the national government.

The war has triggered a hunger crisis, threatened stability in Africa’s second-most-populous country and upended Abiy’s image two years after he won the Nobel Peace Prize for making peace with neighbor Eritrea. Eritrea fought on Ethiopia’s side in Tigray.

The U.S. and United Nations say Ethiopian troops have prevented passage of trucks carrying food and other aid. Scores of people have starved to death, The Associated Press has reported.

Witness accounts so far indicate Tigrayan civilians have been subjected to the most widespread atrocities, blamed on the Ethiopian government, Amhara militias and Eritrean soldiers. However, accusations against the Tigray forces have mounted since they retook much of their region of 6 million people in June and entered neighboring Amhara.

Mekonnen suggested international critics were swayed by a “twisted propaganda campaign,” and he said Ethiopia's leaders were coming to see humanitarian assistance efforts as “a pretext for advancing political considerations.”

Insisting the government was committed to aiding its people, he said it would work with "partners that adhere to the principles of neutrality, independence and humanity and the laws of the country.

“Apart from this, no excuse will justify any attempt to intervene in our internal affairs,” the deputy prime minister warned.

He said Ethiopia was willing to work with the African Union, and its new special representative to the Horn of Africa, toward an “Ethiopia-led national dialogue.”

“We only hope the African Union will be given the space to apply its own wisdom,” Mekonnen said.

Tigrayan forces leader Debretsion Gebremichael said in a letter to the U.N. last month that the AU “cannot provide any solution to the war."

In a subsequent letter to more than 50 heads of state and government and multilateral organizations, Gebremichael entreated them to pressure Ethiopia for the “immediate and unconditional lifting of the siege on Tigray” and “an internationally sponsored and all-inclusive negotiation” for a cease-fire.