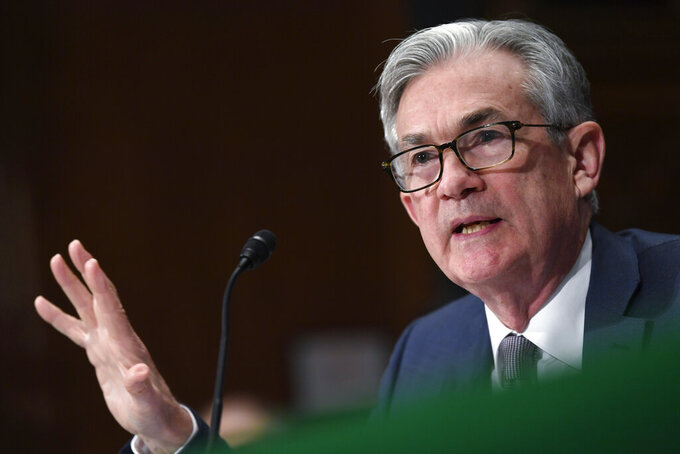 WASHINGTON (AP) — Federal Reserve Chair Jerome Powell gambled last year that his ultra-low rate policies would help revive an economy that had sunk deep into a pandemic-induced recession. So far, his bet has mostly paid off.

Growth and hiring have rebounded faster than anyone expected. President Joe Biden, citing his commitment to lowering unemployment, on Monday picked him for another four-year term.

Yet Powell's challenge is hardly over. Inflation has jumped to a three-decade high, and Powell’s efforts to contain it will constitute the stiffest test of his next term. In doing so, he will also have to grapple with additional complications, from the unusual nature of the pandemic recovery to the risk of getting ahead of other central banks around the world.

Getting inflation under control will be particularly difficult because the Fed isn't facing a traditionally overheating economy. Normally, the central bank can cool runaway growth, and the threat of high inflation, by raising its benchmark interest rate, which affects other loan rates throughout the economy. Doing so tends to slow borrowing and spending.

This time, huge government stimulus spending, the release of pent-up demand as the economy reopened and the Fed's own policies — it's kept its short-term rate near zero since March 2020 — has supercharged consumer demand. The spending surge has mostly been funneled into goods like cars, furniture and electronics. The jump in demand has clogged ports and railways and collided with labor and supply shortages. That combination of factors isn’t something the Fed can fix.

“This isn’t your garden-variety inflation spike," said Sarah Binder, a political scientist at George Washington University who has studied the Fed. “This pandemic economy is different. There’s really no playbook for: How do you get the soft landing the Fed is always aiming for?"

At the same time, the economy still has 4 million fewer jobs than it did before the pandemic. Under a new policy framework the Fed adopted last year, it has placed a renewed emphasis on reaching maximum employment. Should the Fed miscalculate and keep rates too low for too long to try to spur further job growth, price increases could accelerate. The central bank would then have to resort to sharper rate hikes to bring inflation back down. That, in turn, would risk causing another recession.

“2022, without question, is going to be one of the hardest years that the Fed has had to navigate,” said Claudia Sahm, a senior fellow at the Jain Family Institute and former Federal Reserve economist. “They have a very complicated task ahead of them.”

By most measures, the economy has fared quite well this year, even though high prices have undercut Americans' confidence in it and made it harder for many households to afford food, fuel and other necessities. On Monday, while introducing Powell and his nominee for vice chair — Lael Brainard, a member of the Fed's Board of Governors — Biden declared that the U.S. economy has “gone from an economy that was shut down to an economy that’s leading the world in economic growth.” He credited his own policies and the Fed's as well.

“Things are getting better for American workers," the president said. "Higher wages, better benefits, more flexible schedules. ... Savings are up, home equity is up.”

Yet consumer prices also skyrocketed 6.2% in the 12 months that ended in October, the fastest year-over-year jump since 1990. Powell, after having previously describing high inflation as merely “transitory,” now acknowledges that it could persist well into next year.

Most analysts expect the Fed to raise rates at least twice in 2022 to try to rein in inflation, which the Fed wants to average 2% annually over time. But those rate increases will create their own challenges. Under the new framework devised by Powell and Brainard among others, the Fed wants maximum employment that is “broad and inclusive.” That means it will take account of other data points, like the unemployment rate for Black Americans, rather than just the overall jobless rate.

Yet even if the overall jobless rate falls below 4% next year — it's 4.6% now — which would be close to what many Fed officials regard as full employment, African-American joblessness would likely be much higher, given the perennial racial gap in unemployment. Black unemployment is 7.9% now.

Stephanie Aaronson, a former Fed economist who now directs economic studies at the Brookings Institution, noted that the Fed has frequently said it wants to keep the economy growing as robustly as possible, to help disadvantaged workers regain employment or earn higher pay. If the central bank instead starts to hike rates to choke off inflation, it could forestall some of those potential gains in employment.

If that should happen, Aaronson said, “they’re going to have to say why they didn’t wait longer."

“They can articulate this, but they've got to get started," Aaronson said.

Joseph Stiglitz, an economist at Columbia University and Nobel Prize laureate in economics, suggested that the Fed also has to consider the global consequences of its policies. The European Central Bank, for example, has indicated that it still sees higher inflation as mostly a temporary phenomenon. That suggests that Powell could raise rates before the ECB does, particularly if he does so in the first half of next year.

“That will lead to an increase in the (dollar) exchange rate that will decrease our exports, that will lower American competitiveness and that will weaken our economy,” warned Stiglitz, who favored Brainard for Fed chair.