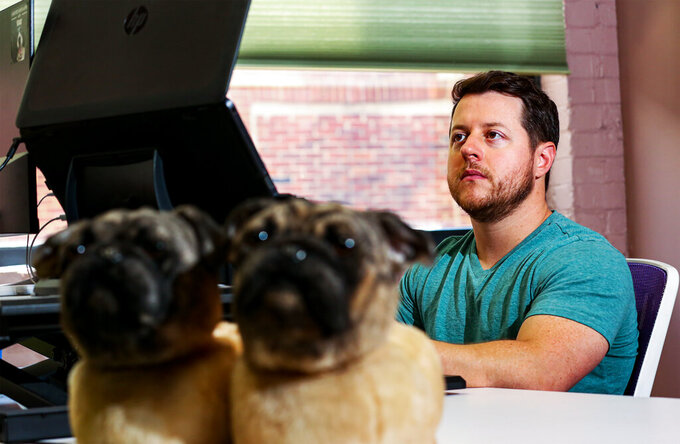 LOUISVILLE, Ky. (AP) — Hershey had been dead for more than 12 years when the small, plush likeness of her finally arrived at the Wardrip home.

As Amber Wardrip handed her husband the “cloned” boxer, it felt like giving him a piece of his beloved pet back. The purchase was goofy and emotional all at the same time, she told me, but it looked “exactly, exactly” like their dog.

And albeit a bit odd, the company that made Hershey and so many other clones like her started right here in Louisville.

When Wardrip gathered some old snapshots of Hershey and ordered her first Cuddle Clone online eight years ago, the Louisville woman had no idea the business originated through an entrepreneurship program at the University of Louisville. Business partners Adam Greene and Jennifer Williams don’t have a retail storefront, or really, any reason to advertise that their own little doggie heaven operates out of an office off Baxter Avenue in the Original Highlands.

But for more than a decade, the two U of L graduates have been growing their business while simultaneously helping families like the Wardrips grieve as Fidos and Fluffies cross over the proverbial Rainbow Bridge.

Their goal is simple. They custom make stuffed animals thatlook exactly like pets.

Wardrip’s family has three clones — Hershey, Mac a Boy and Shady. They live in a small corner in her basement. Shady just recently joined the bunch about two weeks ago, and Wardrip’s 19-year-old daughter has slept with the plush animal every night since its arrival. That recent loss has been hard on the family. Having the clones around reminds everyone in the house these animals were an important part of the family, Wardrip told me when we spoke on the phone.

Just outside his door at the Cuddle Clones office in the Highlands, Greene and Williams keep an impressive collection of “thank you” notes from customers, and they arrive for a variety of reasons.

It’s not always a death in the fur family that brings a customer to the Cuddle Clones website. Greene receives requests from military families, who want to send a clone of the family pet to someone serving overseas. Incoming college students often wrestle with leaving dogs and cats behind when they go away to school, and the clones can provide a small amount of comfort in their pet-less dorm rooms.

They also offer look-alike golf club covers and slippers for that special breed of pet owners that is wholeheartedly obsessed with their pet.

The orders that tug at Greene’s heartstrings most come from elderly people, who have to leave their homes and can’t take their furry companions with them. Rehoming a pet when grandma or grandpa moves into assisted living facilities is a painful, heartbreaking process. Bringing in a plush, almost identical placeholder can soften the blow.

But you can’t mass produce that almost identical appearance, and honing in on those difficult and detailed specifics is actually how the whole idea for Cuddle Clones started.

Williams first thought of Cuddle Clones in 2005, while taking a nap with her dog, Rufus. The Great Dane had unique markings, and she’d never really come across anything — let alone custom slippers — to buy in the dog-lover world that resembled him.

That idea was still in the back of her mind four years later when she enrolled in U of L’s Master of Business Administration program. She pitched the idea to one of her classes, and Greene approached her afterward eager to partner up. The next year, in 2010, they established Cuddle Clones as an LLC and their first clone, a mixed breed dog named Layla, was born.

The pair always assumed they’d be able to convince a manufacturer to join them once they had the business plan in place, but the duo couldn’t find a company willing to take on unique, one-of-a-kind handmade items. The cost and time involved in the production were just too high, and that hurdle almost sent the whole idea over its own Rainbow Bridge well before its time.

Instead, Williams flew to China and opened a private factory right in the heart of Asia’s expansive textile industry. They sourced hundreds of plush materials from nearby, which cut down on cost, and hired a few skilled sewers. By the time she came back to the United States five weeks later, they were able to produce the clones on a very small scale.

In the beginning, they created a new pattern for each order, but today they have a library of breed templates. The designers have built up their collections of golden retrievers, pit mixes, huskies and Pomeranians. They can start with those and then modify smaller touches like bulging bellies, jaw structure, the shape of an ear, and the unique curve of a tail. Breeds with distinctive features, like pugs and their wrinkles, can take upward of 120 detailed pattern pieces.

Their digital storefront formally launched in 2013, and sales slowly trickled in. These aren’t your average stuffed animals, and the price, of course, matches the intimate attention each animal receives. Today, a traditional clone starts at about $300, and customers are asked to submit photos from every angle and list distinctive, descriptive details.

Saying you have a pudgy cat isn’t enough. You have to figure out how the animal carries its weight. Greene’s team wants to see photos of the whole face and both profiles as well as the animal’s bellies and backsides to ensure the plushie looks as close as lifelike as possible.

In Wardrip’s case, Hershey had been gone for so many years, she didn’t have the luxury of digital photos. Instead, she uploaded snapshots she’d taken, and fortunately, she had a lot of them. Back when her children were young, anytime she asked them to pose for a photo, Hershey wasn’t far behind.

Orders came in slowly over the first couple of years, but Greene saw steady growth. Then in 2015, a news story about the company went viral, and orders jumped from about 10 a day to more than 200. Even when the entrepreneurs warned customers it could take as many as eight months for their clone to make it home, the requests for Cuddle Clones still kept coming.

Since that viral boom, their originally modest factory has expanded to employ 60 people. They’ve brought on a laser cutter to help with cutting the fabric, but beyond that, just about everything else is done by hand.

Now you can have a Cuddle Clone rush shipped to you in two weeks for an additional $99-$129.

Wardrip remembers waiting about three months for Hershey, and she said keeping that surprise from her husband was the most difficult secret she’s ever held.

The wait was worth it. The resemblance was uncanny.

Occasionally, though, that’s not the case.

Standing in the Louisville warehouse, you can see the bins of clones that for whatever reason, didn’t give the owner the same emotional feeling the Wardrip family found when Hershey returned home.

It eats into their profits quite a bit, but Williams and Greene still offer full refunds and even remakes when one of their clones doesn’t offer the wow factor they aim for. They pile them up, and then, eventually they donate the returns to organizations such as Toys for Tots.

These are “emotional purchases,” Greene told me, and they’ve got an expectation to meet. While they do cater largely to pet fanatics, a lot of times these clones become part of the healing process.

These people have already lost their dogs or cats, and there’s a responsibility that comes with that. His company is there to ease that loss, not make it any worse.

He sees that gratitude every day in those thank you notes on his wall.

“We hear a lot that they just want to hug their pet again or one more time,” Greene told me. “That’s a big reason. A lot of people said they want to commemorate this life-long friendship, but they also want something that they can touch, see, hug and hold for a moment.”