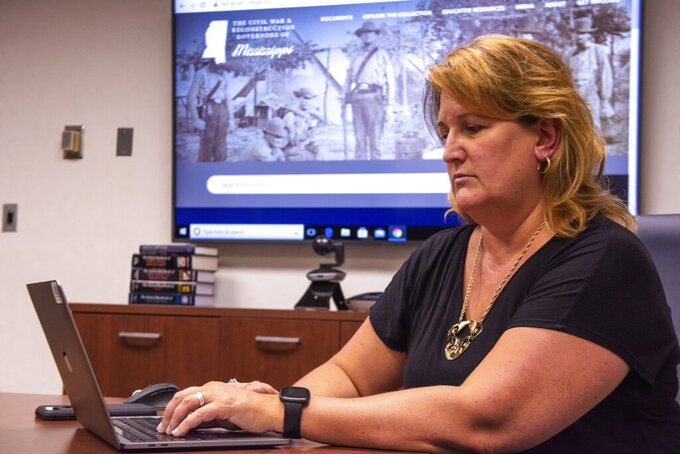 JACKSON, Miss. (AP) — Residents around Mississippi are getting a clearer view of the state’s history during the Civil War era thanks to an ongoing project through the Mississippi Department of Archives and History and the University of Southern Mississippi.

Through 20,000 letters sent to governors by citizens and dating back to 1859, the Civil War & Reconstruction Governors of Mississippi Project will examine a wide range of topics with the goal of helping researchers better understand the revolutionary time period.

The project began in 2019 and work is currently focused on transcribing letters from the post-Civil War period of Reconstruction, which began around 1867. Susannah Ural, director of the project and a professor of history at Southern Miss, said the project showcases a time period historians don’t know much about from a civilian perspective.

“The Governor’s Papers, as much as they sound like you’re gonna be hearing from top powerful politicians, you’re actually hearing from people who wrote to the government,” Ural said. “You get to hear from people you don’t traditionally hear from in historical sources. It lets you hear from a true cross-section of Mississippians during one of our most revolutionary times in history.”

A FRESH VIEW ON A PIVOTAL PERIOD

The Mississippi Department of Archives and History has been collecting the letters of the state’s governors since 1902. Parts of the collection date back to before 1817, when Mississippi was still a territory.

Ural said letters from 1859 to 1862 are available for public viewing through the project’s website. Many of the letters expressed concerns over whether war was on the horizon for the state, Ural said. Secession from the Union was also a primary concern, she said.

Organizers for the project recently invited the public to help with the transcription process. No previous experience is necessary and the only requirements are being able to read cursive handwriting and having access to a computer, Ural said. Transcribers are trained through a short video and a set of guidelines, but anyone can take part, she said.

“As people were stuck at home, we’ve just got volunteers from all over the place and they’re just absolutely critical to the transcription work that has to get done,” she said. “Sometimes it’s retirees, sometimes it’s just people that enjoy this period of history.”

Ural said many historians and history enthusiasts are anticipating the analysis of the letters sent to governors in 1867.

“I think the Reconstruction portion of the collection … that’s the section that people are the most excited about,” she said. “We literally have volunteer transcribers who are volunteering right now just so we will get to that section faster.”

Ural said she’s only reviewed a few letters from the period, but expects to see both concerns and hopes from citizens as the state moves through the post-war period.

“One of the things that I’m trying to track in the collection is if there are windows where African-American Mississippians feel more confident in contacting the governor and then if those windows start closing,” she said.

Ural said she encourages citizens to get involved and learn more about the state’s history.

PROJECT COULD LAST UNTIL 2030

Similar projects have been undertaken in other parts of the country. In 2016, the Kentucky Historical Society launched its Civil War Governors of Kentucky Digital Documentary Edition website, which featured 10,000 letters sent to Kentucky governors from 1860 to 1865. The site has since started including annotated texts that detail related places and organizations mentioned in the letters.

Organizers from Mississippi’s project have reached out to Kentucky’s organizers in the past in order to learn more about their digitizing process, which has helped.

Ural said she hopes to have the transcription process completed by 2030 so the focus can shift to transcribing other documents from the era.

“There’s wonderful opportunities out there and I think it’s always wise to get the job done and move on to something else,” she said.