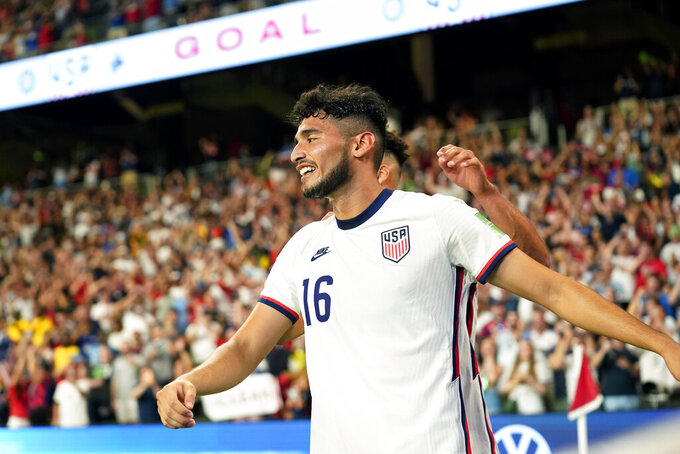 He ultimately picked the United States over Mexico, a choice that is paying off in a big way for the Americans.

It likely will pay big for him personally as well, as every goal he scores will be driving up the price as clubs in Europe's top leagues are reportedly interested in signing the 18-year-old marksman.

Pepi scored both second-half goals for the U.S. in a 2-0 victory over Jamaica in a World Cup qualifier Thursday night. That gives him three goals in two qualifying matches — both key victories for the Americans in their quest to return to the World Cup next year — after deciding to play for the U.S., where he was born, instead of Mexico, where his parents are from.

Pepi's bouncing header early in the second half broke the deadlock and his one-touch shot past the Jamaican goalkeeper on a break sealed the victory. The goals made him youngest American ever to score in consecutive World Cup qualifiers and established him as the team's offensive engine.

“We’re all excited. We’re sitting here and we’re on the (Pepi) train,” U.S. coach Gregg Berhalter said. “What you see and what I really like, he has this instinct (to score). It’s really hard to teach that to players.”

Major League Soccer already knows how lightning can strike off his feet or head. He has 13 goals for FC Dallas this season and scored twice in a 5-3 win in Austin in the same stadium as Thursday night's match.

Born in El Paso to parents who hail from just across the Rio Grande in Ciudad Juarez, Mexico, Pepi grew up in a home with strong cultural influences from both countries. That included watching the Mexican national team and Liga MX, the Mexican domestic league.

He had played or trained with both U.S. and Mexican youth teams, and scored three goals for the U.S. in qualifying for the 2019 Under-17 World Cup.

Still, it was just in August when Pepi described his pending decision between the U.S. and Mexican national teams as “very hard” and one that could go “either way.” He had been in talks with representatives from both national teams during the Gold Cup tournament last summer.

Mexico will rue its loss.

“I feel like I worked just to be able to be on the squad, be able to represent my country. I feel like a made a big decision and like I said when I made my decision, I was going to give my all to the team and that's what I'm doing,” Pepi said Thursday night.

Pepe was called up to U.S. national team shortly after making his decision. He sat out a 0-0 draw at El Salvador and a 1-1 result against Canada. He then becoming the second-youngest player to ever start for the U.S. in a World Cup qualifier in a Sept. 8 match at Honduras.

He made the most of his debut. The Americans trailed at halftime before storming back with four goals. Pepi assisted on one goal, then headed in another in the comeback.

“An 18-year-old gets an opportunity and takes advantage of it,” Berhalter said.