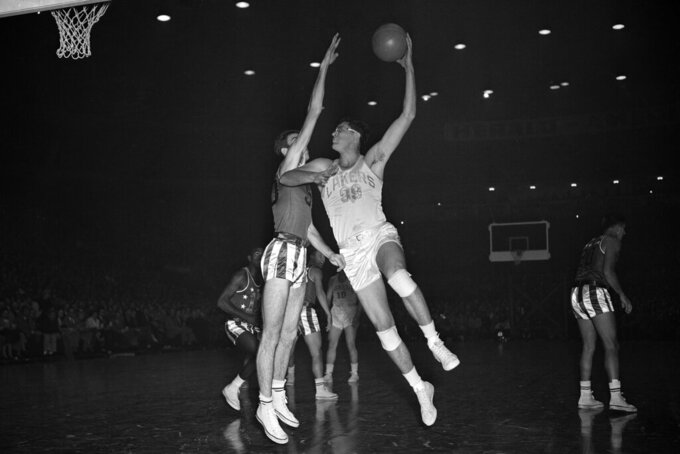 Ed Maloney, ASSOCIATED PRESS
FILE - In this Oct. 26, 1949, file photo, George Mikan (99) Minneapolis Lakers Center, is ready to shoot a shot toward the basket in front of Ed MaCauley at the Chicago Stadium in Chicago. (AP Photo/Ed Maloney, File)

The 1950s All-Decade Team for the NBA as voted on by AP Sports staffers directly engaged with the season-long NBA At 75 series. The team members are:

A pioneer of the jump shot known as “Pitchin’ Paul,” Arizin won scoring titles in 1952 and 1957 for the Philadelphia Warriors, averaging more than 25 points per game each season. The small forward led Philadelphia to the title in 1956. He was a 10-time All-Star who retired as the league’s No. 3 all-time scorer, despite missing two seasons to fight in the Korean War. He was the All-Star MVP in 1952. He was inducted into the Naismith Memorial Basketball Hall of Fame in 1978.

His dazzling point-guard play earned him the nickname “Houdini of the Hardwood.” He led the Boston Celtics to six NBA titles, including victories in 1957 and 1959. He was the 1957 league MVP and All-Star game MVP in 1954 and 1957. He led the league in assists for eight straight seasons ending in 1960 and played in 13 straight All-Star Games. He was inducted into the Naismith Memorial Basketball Hall of Fame in 1971.

The bespectacled Mikan was the NBA's first superstar. In a 1950 poll, The Associated Press named the 6-foot-10 Minneapolis Lakers center the best basketball player of the first half of the 20th century. He anchored five NBA championship teams and won the scoring title three straight years from 1949 to 1951 while featuring a hook shot he could make with either hand. In 1953, he led the league in rebounds and was the All-Star Game MVP. He was inducted into the inaugural Naismith Memorial Basketball Hall of Fame class in 1959.

Pettit won two league MVP awards and was a four-time All-Star MVP. In 1956, he led the league in scoring and rebounding and was named league MVP. He also led the league in scoring in 1958, when he led the St. Louis Hawks to the title. He was All-Star MVP that year, despite being on the losing team. He played in 11 straight All-Star Games, and when he retired, he was the league’s all-time scoring leader and No. 2 rebounder. He was inducted into the Naismith Memorial Basketball Hall of Fame in 1970.

Schayes retired as the NBA’s all-time scoring leader, surpassing George Mikan in 1958. He was an NBA champion for the Syracuse Nationals in 1955 and was an All-Star every season from 1951 to 1962. He was the league’s rebounding leader in 1951 and led the league in free-throw shooting three times. He averaged a career-best 24.9 points in 1957-58. He was inducted into the Naismith Memorial Basketball Hall of Fame in 1973.