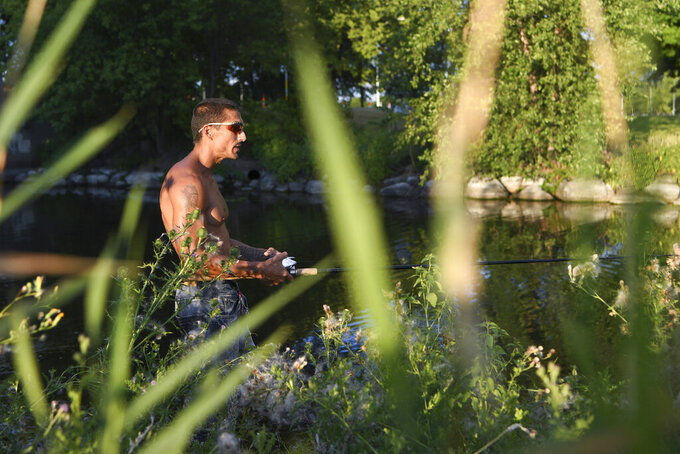 Isaac Wasserman, ASSOCIATED PRESS
Randall Mohammed fishes where Starkweather Creek empties into Lake Monona in Olbrich Park in Madison, Wis., during a humid afternoon on Aug. 2, 2021. "This is one of my favorite places to be," Mohammed says. "I love this creek." Mohammed grew up near the creek and has fished it for as long as he can remember. He used to occasionally eat the fish he caught but stopped doing so after hearing about pollution in the creek, which he says has changed over the years. (Isaac Wasserman /Wisconsin Watch via AP)

MADISON, Wis. (AP) — Carnetta Galvin and Melody Homesly stood on Galvin’s porch holding glasses of wine on an August evening. It was Galvin’s birthday, and the best friends’ laughter reverberated from their corner of the brick apartment and into the streets of the Darbo-Worthington neighborhood in Madison, Wisconsin.

Across the street, tall grass surrounded a stagnant body of water that runs parallel to Galvin’s apartment building before fading into the distance beneath bridges and busy streets. That’s Starkweather Creek, historically fed by springs that have since disappeared or dramatically weakened. East and west branches of the creek wander through northeast Madison — including through the diverse Darbo-Worthington and Truax neighborhoods — before emptying into Lake Monona.

Starkweather Creek is not a source of drinking water, but it’s a critical recreation artery and habitat.

The nonprofit news outlet Wisconsin Watch provided this article to The Associated Press through a collaboration with Institute for Nonprofit News.

Galvin, who has lived near the creek for 16 years, did not know that it contains some of Wisconsin’s most polluted waters until a reporter told her. Nor had she heard of PFAS, the group of human-made chemicals that are drawing particular concerns surrounding the creek and across Wisconsin.

Shorthand for per- and polyfluoroalkyl substances, PFAS are a nationwide scourge and sometimes called “forever chemicals” because of how they accumulate in the body and persist in the environment without fully breaking down. Since the 1950s, companies have used PFAS to manufacture everything from cookware with non-stick coatings to food packaging and firefighting foam. Research has linked the substances to low birth weights, immune system challenges, thyroid problems, certain cancers and more.

PFAS are poorly absorbed through skin, but they are hazardous to ingest — whether by consuming contaminated water, fish or foods packaged in materials containing PFAS.

In 2019, Starkweather Creek contained higher levels of PFOA and PFOS — two more scrutinized types of PFAS — than any other waters the Department of Natural Resources tested that year. At the creek’s Fair Oaks Avenue crossing, the DNR detected levels of PFOS at 270 parts per trillion and PFOA at 43 ppt.

How much PFAS is considered dangerous? That’s complicated. During years of federal inaction, a few states have adopted their own PFAS regulations. Wisconsin has yet to do so but is working towards it. The DNR has proposed updates to include a state Department of Health Services-recommended limit of 20 ppt for combined PFOS and PFOA in groundwater.

The agency is also pursuing drinking water and surface water criteria for PFAS through a rulemaking process that the Republican-led Legislature lengthened a decade ago.

The Wisconsin DNR as of late September was tracking 86 known discharges of PFAS statewide.

Despite Dane County’s initial steps toward addressing Starkweather Creek’s pollution and engaging the public on the issue, awareness of the problem remains mixed among anglers, recreational users and other residents, Wisconsin Watch found. Some say local officials should act more urgently.

“I feel disappointed and sad about not knowing what is affecting our health,” Galvin said.

Formed by retreating glaciers that left a mix of oak savannah, prairie and nearly 4,000 acres of wetlands, the 24-square mile Starkweather Creek Watershed saw dramatic change in the decades after European immigrants began settling in Madison. The creek was filled, dredged, channeled and fashioned into a drainage system for local farms. Later, industry, stores and homes sent wastewater in it.

Most of the watershed’s wetlands were drained or filled for development. Sediment and debris choke the creek’s bottom and shoreline, and its lower reach acts as a stormwater channel for Madison’s East Side — catching a stew of pollutants.

The DNR first added Starkweather Creek to its impaired waters list in 1998 due to low levels of dissolved oxygen in the water, sediment and toxic metals. The agency has since documented chloride, E. coli and PFOS impairments. But pollution frustration swirled around the creek even decades earlier.

“What’s the use of complaining? It’s been this way for years,” one local woman told the Cap Times in a 1967 story lamenting the algae-covered creek’s putrid stench. “Nobody’s going to do anything about it.”

More than half a century later, Public Health Madison and Dane County posted signs along the creek warning residents not to drink its water or swallow its foam due to PFAS — and to keep their pets out. “Many fish from this body of water are not safe to eat more than once a month,” the signs warn.

The DNR has identified Truax Field Air National Guard Base and Dane County Regional Airport as known sources of PFAS in the creek. That’s due to the chemical-laced firefighting foam used on site. The DNR is continuing to investigate other potential sources of contamination.

The Federal Aviation Administration requires airports to use firefighting foams that meet certain specifications — and contain PFAS, but Congress in 2018 ordered the agency to allow non-fluorinated foams by October of 2021. The FAA will likely ask to extend that deadline as it continues to search for effective alternatives, Jones said.

The Zoom webinar in August was the commission’s first public meeting dedicated to the issue, although the topic has come up at other meetings, Jones said. It came two years after the DNR first flagged the PFAS contamination and linked it to the airport. Jones said the airport plans to boost public engagement on PFAS and encouraged concerned residents to explore PFAS-related information on the airport’s website.

Meanwhile, Dane County Executive Joe Parisi said the county aims to secure funding and work with the airport and other polluters to clean up the watershed.

“We absolutely need to do everything we can to address what is on our property,” he told Wisconsin Watch. “We can’t assume that the only PFAS entering Starkweather is coming from the airport. That is a highly industrial area down there. I think it’s important that the DNR … make a full-faith effort to look into all of the potential sources.”

Aside from posting warning signs, the county has held public meetings about the contamination and sent letters to homes around Starkweather Creek.

Homesly says those with power to clean up the creek should put themselves in the shoes of those who live around it.

“Treat it like they would treat it if it was in their neighborhood, in their family and their kids’ health,” Homesly said. “Something has to be done immediately.”