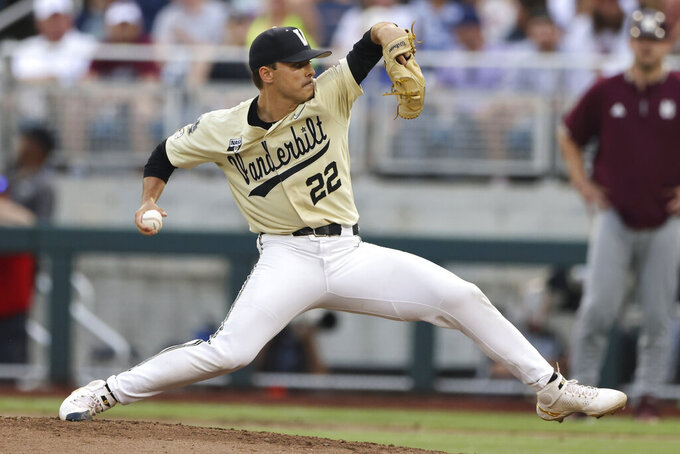 Second overall pick Jack Leiter signed Wednesday with the Texas Rangers, getting a $7,922,000 signing bonus that is the largest for a drafted pitcher in 10 years.

The deal for the right-hander out of Vanderbilt, and the son of former big league lefty Al Leiter, was for just above the recommended $7,789,900 slot for the second player taken in baseball’s amateur draft on July 11.

That was the largest signing bonus for a pitcher since Gerrit Cole got $8 million after the Pittsburgh Pirates took him first overall in 2011. That was the last draft before Major League Baseball guidelines for signing bonuses of drafted players went into effect.

“Even before the selection was made, (the Rangers) made it clear to me and my family that this was kind of what they wanted to happen. And through the whole process, it just felt like I was the right fit for them. And it kind of felt the other way around, it felt like they were the right fit for me,” Leiter said. “It was kind of just a perfect match.”

The 21-year-old Leiter, who will return to Vanderbilt to continue his education this fall while preparing there for his professional debut in the Rangers organization next year, was 11-4 with a 2.13 ERA while throwing 110 innings over 18 starts this season for the College World Series runner-up Commodores.

Rangers general manager Chris Young, the former big league pitcher who was a two-sport athlete at Princeton, said the team would devise a program with Vanderbilt trainers and staff for Leiter’s baseball work.

“We’ll work together to coordinate every aspect of it, with the idea being that in 2022 we’re ready to go,” Young said.

Young said it didn’t make sense for Leiter to pitch this summer or fall in the Rangers organization because of the workload he had during his college season.

Leiter's 179 strikeouts tied teammate Kumar Rocker for the NCAA Division I lead, and he averaged 14.6 strikeouts per nine innings. Rocker was drafted 10th overall by the New York Mets.

Leiter struck out eight in six innings as the winning pitcher for Vandy in the opener of the best-of-three CWS finals last month before Mississippi State won the next two games for the title. He threw a no-hitter March 20 against South Carolina, part of a stretch of 20 consecutive hitless innings over three starts.

Leiter pitched only one full season as Vanderbilt, where he was a freshman in 2020 when the season was canceled in mid-March because of the COVID-19 pandemic. In his return to the Nashville campus, he will be able to take advantage of a setup that includes a locker room for former Commodores who play professionally.

“Honestly, I don’t know what they’re going to do because it’s filling up in there,” Leiter said. “I am excited for that. I’ll be around other guys who’ve done it a lot longer than me. Big leaguers, guys like David Price, Sonny Gray, Mike Minor, they’re always going back there. And it makes it really special.”

Along with his father, Al, who was a two-time All-Star during a 19-season career with four teams that ended in 2005, the younger Leiter had an uncle and cousin — Mark Leiter and Mark Leiter Jr. — who played in the big leagues.