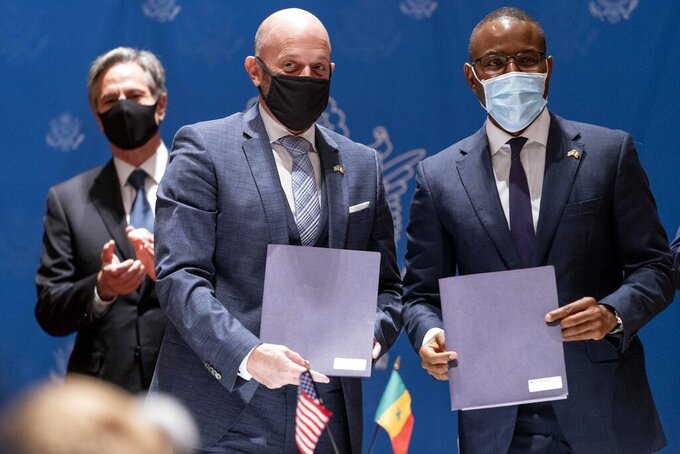 Andrew Harnik, ASSOCIATED PRESS
US Secretary of State Antony Blinken, left, applauds as Motorola Solutions Vice President for Africa and the Middle East Patrick Fitting, second from left, and Senegal's Minister of Economy, Planning and International Cooperation Amadou Hott, pose for photographs after signing an agreement during a commercial diplomacy event with U.S. companies and the government of Senegal a meeting at the Radisson Blu Hotel in Dakar, Nigeria, Saturday, Nov. 20, 2021. Blinken is on a five day trip to Kenya, Nigeria, and Senegal. (AP Photo/Andrew Harnik, Pool)

DAKAR, Senegal (AP) — U.S. Secretary of State Antony Blinken on Saturday warned a shadowy Russian company with connections to the Kremlin not to interfere in efforts aimed at restoring democracy in the West African nation of Mali.

As he wrapped up a weeklong, three-nation tour of Africa that was dominated by crises across the continent, Blinken said it would be “unfortunate” if the Wagner Group became active in Mali, where there are internationally backed plans to have a democratically elected government in place by April.

Mali “remains a linchpin for future stability in the Sahel and we have deep concerns about that stability and deep concerns about the extremism and terrorism that is spreading tentacles in the region,” Blinken said at news conference with Senegal's foreign minister, Aissata Tall Sall. West Africa’s Sahel region is the vast area south of the Sahara Desert where extremist groups are fighting for control.

“It would be especially unfortunate if outside actors engage in making things even more difficult and more complicated,” he said. Blinken said he was speaking particularly of the Wagner Group, which has deployed mercenaries to Syria, the Central African Republic and Libya, drawing protests from the West and others.

The Wagner Group, owned by a confidant of Russian President Vladimir Putin, has been accused by Western governments and U.N. experts of human rights abuses in the Central African Republic and involvement in the conflict in Libya.

France and Germany have objected to the presence of Wagner mercenaries in Mali, and the European Union said this past week that it would consider sanctions against anyone interfering in Mali's democratic transition.

Russian Foreign Minister Sergey Lavrov has said the company has a “legitimate” right to be in Mali because it was invited by the transitional government, and he has insisted the Russian government is not involved.

Blinken, who has also been pressing while in Africa for an end to crises in Ethiopia and Sudan, said the United States was ready to restore aid to Mali that was suspended after a military coup.

“This is ultimately about the people of Mali and their aspirations for peace, their aspirations for development and respect for human rights," he said. “We look forward to taking the next steps to resume the full array of assistance as soon as the democratically elected government has taken office.”

Mali has struggled to contain an Islamic extremist insurgency since 2012. Extremist rebels were forced from power in Mali’s northern cities with the help of a French-led military operation, but they regrouped in the desert and began launching attacks on the Malian army and its allies.

In June, Col. Assimi Goita was sworn in as president of a transitional government after carrying out his second coup in nine months. Mali faces increasing international isolation over the junta’s power grab. Elections are due to be held in February, but the EU fears they will be delayed.

In Dakar, Blinken was pushing American-built infrastructure projects, including an initiative to produce COVID-19 vaccines in Senegal, a first for Africa. He also promoted sustainable development, women’s empowerment and other human rights initiatives to bolster faltering democracies.

In meetings with female entrepreneurs and executives from U.S.-based multinational companies, Blinken extolled the benefits of boosting women's roles in economies and of buying American. In a jab at China, with which the U.S. competes for lucrative business, he noted that America invests “without saddling the country with a debt that it cannot handle.”

“The effects are going to be felt inside of Senegal, improving infrastructure, creating jobs and reinforcing public safety and climate resilience,” he said as he witnessed the signing of four road, traffic management and other deals between Senegal and U.S. firms worth about $1 billion.

The investment, he said, shows “our shared values of democracy, transparency and rule of law as well as innovation.”

In less than two weeks Senegal will host a major China-Africa trade and investment forum, underscoring Beijing's interest in increasing the scope of its influence on the continent. U.S.-China competition in Africa has been a major underlying theme of Blinken's trip, although he has tried to downplay it.

“Our purpose is not to make our partners choose, it is to give them choices,” he said. "And when people have choices, they usually make the right one.”

Tall Sall, the foreign minister who will play a major role in the forum, thanked Blinken for his comments.

“We have a diplomacy of sovereignty from which we do not exclude anyone," she said. “There is not only one choice. We have many choices.”

As he does in France and other French-speaking countries, Blinken spoke extensively in French at his public appearances, including with Senegal's president, Macky Sall, and at an event at Dakar's Institute Pasteur, which hopes to begin producing COVID-19 vaccines with American help next year.

In his meetings, Blinken addressed security issues, particularly a rise in jihadi violence across the Sahel and increasing authoritarianism that many believe is fueling extremism.

Senegal is a key partner in the fight against extremism and last year it hosted the U.S. military’s annual counterterrorism exercise, Flintlock.

One area where Sall may seek U.S. help is with increased security measures along the country's borders with Mali and Mauritania, where several counterterrorism operations have taken place in recent years.

This story has been corrected to reflect that the European Union said this past week, not last month, that it would consider sanctions against anyone interfering in Mali’s democratic transition.