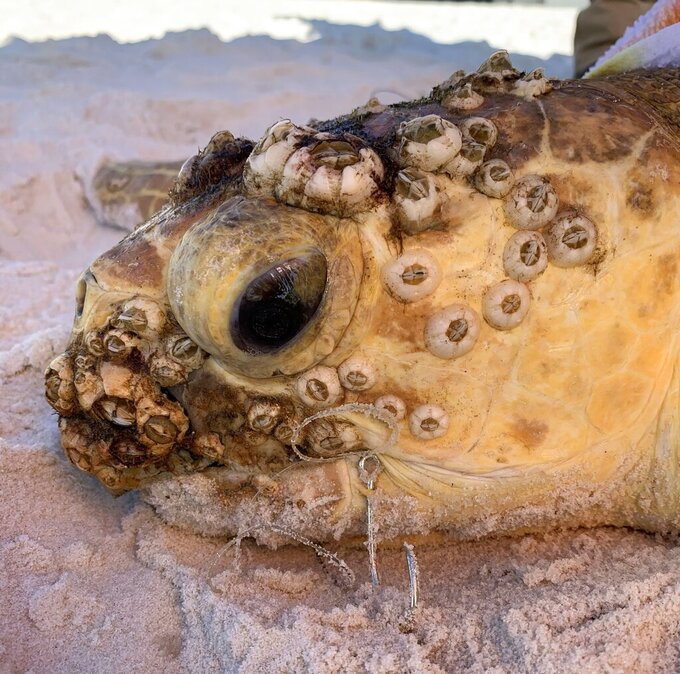 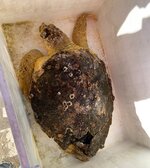 A threatened loggerhead sea turtle was found dead Friday at the Mississippi Aquarium, eight days after being accidentally hooked and then rescued at a state park on Alabama's Gulf Coast.

The turtle was brought ashore Oct. 7 and taken to the Alabama-Mississippi state line, where it was turned over to aquarium specialists for expert care.

The 97-pound (44-kilogram) turtle was very anemic and was swollen from protein deficiency. A post-mortem exam found that two fish hooks had perforated its small intestine, something that could lead to infection.

A third hook "was anchored at the entrance to the stomach,” Alexa Delaune, the aquarium's vice president for veterinary services, wrote in an email. “The line from the hook extended down into the small intestines and caused them to become all bunched up,” blocking the large intestine.

“Any one of these problems alone could kill an animal and he was dealing with all of them,” she wrote.

The turtle also had a severely damaged shell, probably from a boat propeller, Delaune said. Barnacles all over his head and body indicated how lethargic he had become.

A post-mortem revealed the turtle — initially thought to be female — was a male, Delaune wrote.

On Tuesday, she had described the turtle as tough but critically ill with a guarded prognosis.

Adult loggerhead sea turtles typically weigh 200 to 350 pounds (90 to 160 kilograms) as adults, with shells 2.5 to 3.5 feet (80 to 110 cm) long, according to the National Oceanic and Atmospheric Administration. However, this one wasn't quite adult, Delaune said.

Where the the back of the 71-centimeter (2.3-foot) shell once curved outward was a shallow dent 30 centimeters (nearly 1 foot) wide. Large chunks of shell were missing and shattered bits remained. Barnacles there indicated that he'd been hit some time ago, noted Aubrey Bianco, pier manager at the Gulf State Park Fishing Pier in Gulf Shores, Alabama.

“Loggerhead” is an old word for someone with an outsized head, and the turtles’ big heads support strong jaws that crunch crustaceans and shellfish.

This one broke a fishing line after being hooked Oct. 4 at the pier, Bianco said Wednesday.

Alerted after the animal was hooked again on Oct. 7, park security officer Jacob Mitchum was able to take the fishing pole and carefully guide the turtle toward the beach, where he and a pier attendant waded in to bring it ashore.

“A little girl ... gave us her beach towel so we could wet it and put it on the turtle,” and an adult couple brought their beach umbrella to further shield the animal from the sun, said Farren Dell, an assistant naturalist at the park.

Bianco, Dell and another assistant naturalist drove to meet aquarium staffers at a truck stop near the state line. Dr. Sean Perry, an aquarium veterinarian, did an ultrasound exam there to check the heart rate and other vital signs.

The propeller that broke the shell may have caused other damage. Delaune said the turtle seemed to have problems using the left rear flipper. The reptile underwent a CT scan Monday at Singing River Hospital, and veterinarians planned to check whether those images show injuries to the spine or internal organs.