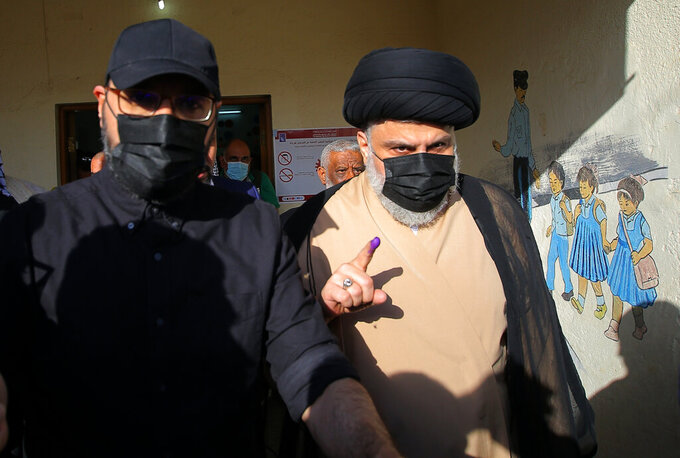 Anmar Khalil, ASSOCIATED PRESS
Populist Shiite cleric Muqtada al-Sadr, right, displays his ink-stained finger that shows he voted, at a polling center during the parliamentary elections in Najaf, Iraq, Sunday, Oct. 10, 2021. Iraq closed its airspace and land border crossings on Sunday as voters headed to the polls to elect a parliament that many hope will deliver much needed reforms after decades of conflict and mismanagement. (AP Photo/Anmar Khalil)

BAGHDAD (AP) — Iraq’s Shiite militias that often serve as a proxy for neighboring Iran have taken a beating in Iraq’s election, while a Shiite cleric who set himself apart by taking a more nationalistic approach has emerged as Iraq’s strongest political figure.

The results underscore growing divisions over Iran’s heavy-handed influence in the country, weakening Iran's allies as it seeks to revive its nuclear deal with world powers and engage with its regional rival, Saudi Arabia.

It also heightens tensions among Shiite factions in the country, potentially further complicating Iraq’s challenge in balancing its alliances with adversaries Iran and United States.

Iran-backed militias rejected the results Tuesday after it became known that their electoral list, known as the Fatah Alliance, saw its parliament seats drop from 48 to between 12 and 14. The Sairoon list of Shiite cleric Muqtada al-Sadr picked up to 20 additional seats, consolidating its status as the single largest bloc in the 329-member parliament.

A Sunni faction headed by Parliament Speaker Mohamed al-Halbousi came in second — a spot gained by the Fatah Alliance in 2018 – while independent candidates won around 10 seats. It's the first representation in parliament of candidates linked to the 2019 anti-government protest movement.

Hadi al-Ameri, leader of the Fatah Alliance, said the results were “a scam.” Abu Ali al-Askari, a senior leader with Kataib Hezbollah, one of the most hard-line militias loyal to Iran, claimed voting manipulation and said the militias were being targeted.

CLERIC ON THE ASCENDANT

Widespread disillusionment with Iraq’s current political class appears to have helped the political coalition of al-Sadr in the elections marked by record low turnout.

Remembered for leading an insurgency against U.S. forces, al-Sadr has in recent years sought to recast himself as a nationalist, railing against corruption and failing services.

Although he enjoys close ties with Iran’s political and religious leadership, he is publicly critical of both Iranian and U.S. influence in the country. In recent years he has criticized the flow of Iranian arms to Shiite militias in Iraq.

Al-Sadr commands the devotion of millions of Iraqis, including those who fought in his former Mahdi Army militia from the early days of the U.S. occupation. In 2014, he reorganized his fighters under the name the Peace Brigades — Saraya Salam — and fought against Islamic State militants.

Celebrations erupted Monday evening in Baghdad’s Sadr City, an impoverished quarter that is home to about 3 million people and is named after the cleric’s father, Ayatollah Mohammed Sadeq al-Sadr, who was killed by suspected agents of Saddam Hussein in 1999.

While many did not turn out to vote amid a general mood of apathy, al-Sadr’s sophisticated political machine mobilized his loyal base of followers to cast their ballots and successfully made use of a new electoral law based on smaller constituencies.

The preliminary results will almost certainly give al-Sadr increased sway over the government.

Iranian-backed Shiite militias known collectively as the Popular Mobilization Forces (PMF) gained popularity and outsized influence after playing a key role in defeating IS militants beginning in 2014. The Fatah Alliance made up of PMF candidates came in second place in the 2018 elections, which was seen as an indication of Tehran’s growing influence in Iraq.

But the armed groups have been increasingly seen as a threat to the state’s authority, and the issue of arms outside state control has become contentious. When tens of thousands of people rose up in late 2019 in Baghdad and the predominantly Shiite south, raging against corruption and Iran’s influence, Iraqi militias took part in suppressing them with live ammunition. Activists accused them of a spate of kidnappings targeting protesters and young activists.

“The parties that claim to represent the PMF were punished by the public because of their stances against the Tishreen movement, ” said Nisan al-Zayer, an independent candidate, referring to the protests by the month they occurred. Al-Zayer ran on the list for the Imtidad Movement, drawn from the protest movement, and got more than 22,000 votes in the southern province of Nasiriyah, a flashpoint in the demonstrations.

The assassinations of Iranian Gen. Qassem Soleimani and Iraqi militia leader Abu Mahdi al-Muhandis in Baghdad by a Washington-directed drone strike in January 2020 led to new splits within militia factions, making them increasingly unruly and disparate.

“The election results were a strong message to Iran that its political arms are rejected by the Shiite street” even if Iran will not let go of its armed militias, said political analyst Ihsan Alshamary.

The result of the election will have repercussions domestically and will go a long way in determining Iraq’s relationship with its neighbors and the U.S. for the next four years.

It is unlikely that al-Sadr can pull together a governing coalition without the Iran-aligned political groups. Any political party or alliance must gain a majority of the 329 seats in parliament to be able to choose a prime minister and form a government.

Months of negotiations are expected before a coalition representing at least 165 members of parliament can be formed and elect a prime minister.

Also, Iran still holds considerable sway with several Shiite blocs and figures, and will seek to exert pressure on the negotiations.

The United States and Gulf Arab states will be looking to see whether incumbent Prime Minister Mustafa al-Kadhimi can secure a second term.

Al-Kadhimi, a former intelligence chief who is supported by Washington, has been successful in balancing between U.S. and Iranian interests in Iraq. He has also hosted several rounds of talks between regional rivals Iran and Saudi Arabia in a bid to ease tensions. These talks now hang in the balance, while al-Sadr decides whether to opt for Kadhimi again as a compromise candidate.

EDITOR’S NOTE — Zeina Karam, the news director for Iraq, Syria and Lebanon for The Associated Press, has reported from the Middle East since 1996. Qassim Abdul-Zahra is an AP correspondent based in Baghdad since 2003. Follow them on Twitter at www.twitter.com/zkaram and www.twitter.com/qabdulzahra.