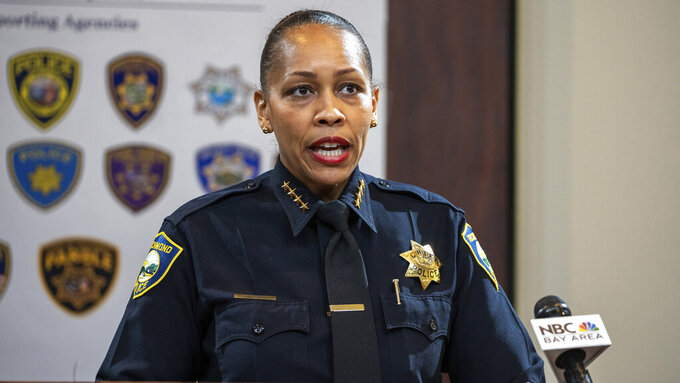 Dylan Bouscher, ASSOCIATED PRESS
Richmond Police Chief Bisa French speaks at a news conference in Richmond, Calif., Thursday, May 7, 2020. French has been put on administrative leave after her 18-year-old daughter accused her and her police sergeant father of abuse. (Dylan Bouscher/Bay Area News Group via AP)

RICHMOND, Calif. (AP) — A police chief in the San Francisco Bay Area has been put on administrative leave after her 18-year-old daughter accused her and her police sergeant father of abuse.

Richmond police Chief Bisa French was placed on administrative leave following several incidents that started in September involving her daughter, who accused French and her father, Oakland Police Sgt. Lee French, of attacking her and threatening to kill her and her 34-year-old boyfriend, who the couple says is pimping her, the East Bay Times reported Thursday.

French was put on administrative leave after the newspaper reported Wednesday that one of her female relatives was seeking a restraining order and had accused her and her husband of threatening to kill her and her boyfriend. Bisa French’s attorney, Mike Rains, confirmed to KTVU-TV that the relative was in fact, their daughter.

The boyfriend, Joe Goldman of Napa, and also known as Oho McNair, was charged Wednesday in Alameda County with pimping and pandering. Court documents say Goldman and the chief’s daughter stayed at motels in Oakland frequented by sex workers and that she was trafficked by him in that city. It was not immediately known if Goldman has an attorney who can speak on his behalf.

The daughter is seeking a restraining order against her parents, saying that during an altercation at their home on Sep. 21, Bisa and Lee French used “police holds” to pin her down during an argument and made repeated death threats against her and Goldman.

Rains said the couple “wanted nothing other than to get (their family member) back and get her away from this despicable human being and have made lawful efforts to achieve that.”

Meanwhile, authorities in Solano County are investigating allegations that Bisa and Lee French threatened Goldman’s mother after showing up at her Vallejo home on Sept. 22, the newspaper reported.