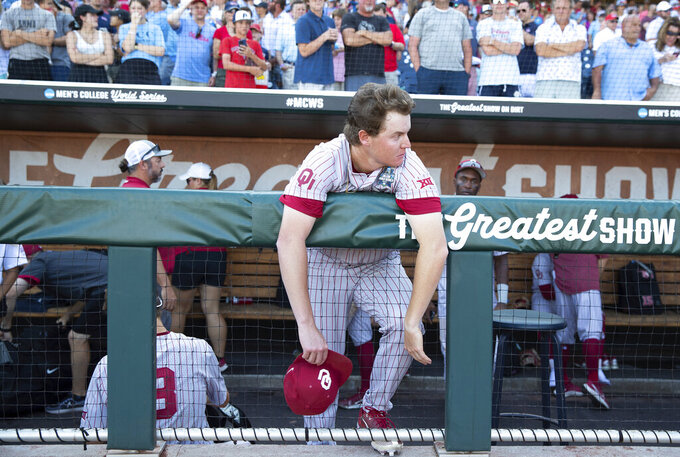 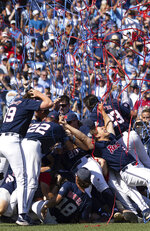 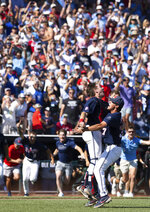 OMAHA, Neb. (AP) — The last team to get into the NCAA baseball tournament was the last team standing.

Mississippi scored twice on wild pitches in a three-run eighth inning and the Rebels won their first national baseball title, sweeping Oklahoma in the College World Series finals with a 4-2 victory Sunday.

The Rebels (42-23) became the eighth national champion since 2009 to come out of the Southeastern Conference and third straight, and the trophy will stay in the Magnolia State for another year. Mississippi State won last year.

Ole Miss benefited from a runner-interference call that took a run away from Oklahoma (45-24) in the sixth inning. The Rebels also overcame a spectacular pitching performance by Cade Horton, who set a CWS finals record with 13 strikeouts.

Brandon Johnson struck out the side in a 1-2-3 ninth inning to set off a celebration on the field and in the stands where the majority of the 25,972 were Rebels fans dressed in Ole Miss powder blue. Catcher Hayden Dunhurst ran to the mound to embrace and then tackle Johnson after Sebastian Orduno swung and missed on the final pitch.

It was an improbable journey for the Rebels and 22nd-year coach Mike Bianco, who was under fire when his team sat at 22-17 overall and 7-14 in SEC play on May 1.

“I think they’ve showed a lot of people that you can fall down, you can stumble and you can fail, but that doesn’t mean you’re a failure,” Bianco said. “If you continue to work hard, you continue to push and you continue to believe, you can accomplish anything. That’s not some poster or some tweet to motivate you. We’ve all heard that. These guys have lived that this season.”

Ole Miss beat out North Carolina State for the final at-large bid and had to go on the road for regionals and super regionals. The Rebels finished the season on a 20-6 run, including 10-1 in the national tournament.

Their only loss at the CWS was 3-2 to Arkansas on Wednesday. The next day, Dylan DeLucia pitched a four-hit shutout to beat the Razorbacks and send the Rebels to the finals. DeLucia was named CWS Most Outstanding Player after allowing one earned run, striking out 17 and walking none in 16 2/3 innings.

Ole Miss, which won the CWS finals opener 10-3, was down 2-1 going into the eighth inning Sunday. Trevin Michael relieved Horton with one out, and Jacob Gonzalez singled through the right side to drive in the tying run.

“Kind of knew we were going to start the scoring in the eighth or ninth,” said Gonzalez, 3 for 23 in the CWS before singling twice and homering Sunday. “That's how we are. We’re going to put the pressure on. We’re not going to strike out and sit down. Luckily, I got a hit and I finally got to help the team out this week.”

Michael (4-2) then uncorked the wild pitches that brought in Justin Bench for the go-ahead run and another to bring in Gonzalez. On the first one, catcher Jimmy Crooks got crossed up on a breaking ball. On the second, Michael's low pitch got under Crooks' glove.

“I wouldn’t want anybody behind the plate other than Jimmy Crooks or Trevin to close the game,” OU coach Skip Johnson said.

Horton allowed four hits and walked none during a sterling 107-pitch performance.

“We made it here, and we accomplished a lot this year,” said Horton, a projected first-round pick next month in the Major League Baseball draft. “But we’ll be back. I know that because this team laid the foundation for the future of Oklahoma baseball.”

Oklahoma appeared to have taken a 1-0 lead in the sixth but had the run taken down when John Spikerman, who put down a squeeze bunt, was called for runner's interference for impeding Elko at first base as he tried to catch Elliott's throw.

Jackson Nicklaus had been hit by Elliott leading off the inning and was on third after a sacrifice and wild pitch. He came home on Spikerman's bunt, but Bianco asked for a video review when Spikerman was called safe at first.

Bianco said he rarely looks at replays on the scoreboard, but did this time. He said he thought Spikerman was out of the running lane and came onto the field to request the video review.

Spikerman knocked off Elko's glove as he ran through first, with the ball ending up in foul territory. The call was overturned, with Spikerman ruled to have been inside the base line as he ran through the bag, requiring Nicklaus to return to third base.

Johnson questioned whether Bianco made his request within 30 seconds after the play ended, as required by the rules. He didn't dispute the final ruling. He just didn't like how it came about.

“If we mess with the fabric of the game by getting computer umpires," he said, "I think I’ll just go fishing.”