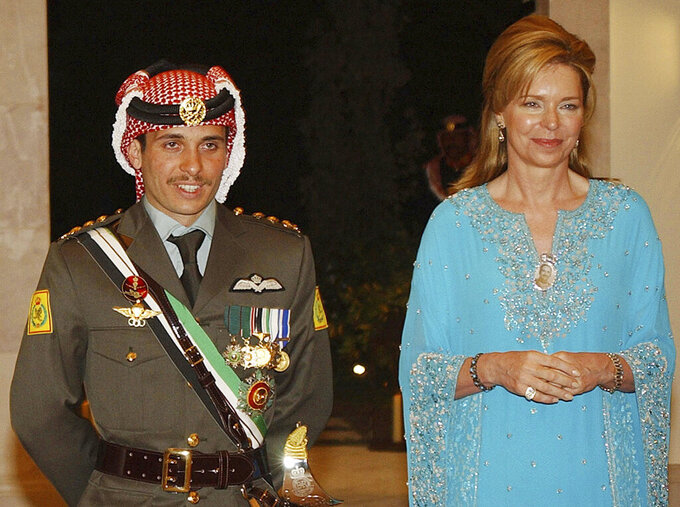 Hussein Malla, ASSOCIATED PRESS
FILE - Then Crown Prince Hamzeh of Jordan, left, with his mother Queen Noor, during his wedding ceremony in Amman, Jordan, May 27, 2004. King Abdullah II of Jordan has gone public with a royal rift with his half-brother Prince Hamzeh and formalized the former crown prince's house arrest, calling him “erratic” in an unprecedented harsh-worded public letter published Thursday, May 19, 2022. The king said in a public letter that he had approved measures to detain Prince Hamzah in his palace and restrict his communications and movements, citing his half brother’s “erratic behavior and aspirations.” (AP Photo/Hussein Malla, File)

JERUSALEM (AP) — Jordan's king has gone public with a royal rift with his half-brother and formalized the former crown prince's house arrest, calling him “erratic” in an unprecedented harshly worded letter published Thursday.

King Abdullah II said in the letter that he had approved measures to detain Prince Hamzah in his palace and restrict his communications and movements, citing his half brother’s “erratic behavior and aspirations.”

“We will provide Hamzah with all that he requires to live a comfortable life, but he will not have the space he once abused to offend the nation, its institutions, and his family, nor to undermine Jordan’s stability,” the king said.

King Abdullah had tried to keep the rift within the family, in part to protect the Hashemite Royal family brand. His harshly worded public condemnation of his half-brother is a potentially risky move. Hamzah has enjoyed considerable popularity, particularly among the Jordanian tribes, traditionally a bedrock of support for the monarchy.

Abdullah and Hamzah are sons of King Hussein, who ruled Jordan for nearly a half-century before his death in 1999. Abdullah had appointed Hamzah as crown prince upon his succession but stripped him of the title in 2004.

The monarch had placed Hamzah under house arrest in April 2021 for his alleged plot to destabilize the Western-allied kingdom. Abdullah had accused his brother of sedition but said the matter was being resolved within the family, with Hamzah remaining in his palace under the king's protection.

In March, Hamzah apologized to the king, according to a letter released by the Royal Court, saying that he hoped that “we can turn the page on this chapter in our country’s and our family’s history.”

But last month, the outspoken Hamzah formally relinquished his princely title and protested on Twitter, writing that his convictions could not be reconciled with the “current approaches, policies and methods of our institutions" in an oblique criticism of the king.

In Thursday’s letter, King Abdullah lashed out at his half-brother, saying he would “never allow our country to be held hostage to the whims of someone who has done nothing to serve his country.”

The Hashemite Kingdom of Jordan is a close Western ally and has long been seen as a stable Arab monarchy in a turbulent region.