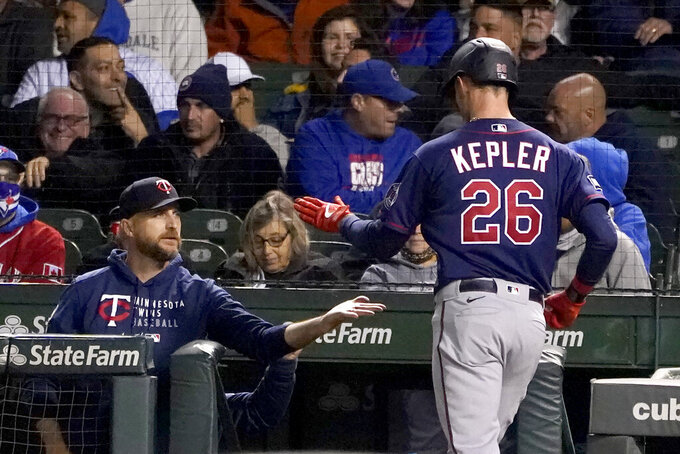 Kepler staked the Twins to a 2-0 lead with a homer in the first inning and hit his 19th home run in the fourth, a tiebreaking drive. He has 11 multihomer games, including two this year.

The Cubs and Twins are both 67-85, nearing the end of disappointing seasons. Chicago lost for the ninth time in 11 games.

Ryan (2-1), a U.S. Olympian acquired from the Tampa Bay on July 22 with minor league pitcher Drew Strotman for Nelson Cruz, limited the Cubs to three hits in five innings in his fourth major league appearance.

“He’s making a very distinct impression on everyone here,” Twins manager Rocco Baldelli said. “You get the feeling from him it’s not just about the start or proving himself. He just wants the ball. He simplifies things very well. He’s not getting caught up with the distractions that can come up.

“I think his overall readiness level to be here is reasonably high, and he’s showing that with his performance here," he said.

Ryan, a 25-year-old righty, allowed a two-run single to Nico Hoerner in the second before retiring 10 of his final 11 batters.

Chicago’s Frank Schwindel extended his career-best hitting streak to 11 games with a single in the third.

Ryan struck out the next seven batters, including the last five on called third strikes.

“I’ve been told I have some good hop at the end of my pitches,” Ryan said. “I don’t know what it is.”

Cubs starter Kyle Hendricks (14-7) didn’t walk a batter for the ninth time in 31 starts. However, the two homers by Kepler increased Hendricks’ home runs allowed to a career-high 31 this season.

“I think that was much more characteristic of how Kyle goes about his business,” Cubs manager David Ross said of Hendricks, who induced 11 groundouts.

Nick Gordon hit a double in the ninth and scored on Andrelton Simmons’ sacrifice fly. Gordon is 6 for 15 in his last four games.

That run loomed large because the Cubs cut the deficit to one on Ian Happ’s single and Willson Contreras’ groundout. Closer Alex Colomé struck out Trayce Thompson with runners at second and third for his 15th save in 22 chances.

The Cubs struck out 18 times, tying their season high against Pittsburgh on Sept. 2.

Twins CF Bryon Buxton (foot) didn’t start after getting hit by a pitch in the ninth inning of Tuesday’s game. Buxton appeared as a pinch hitter in the seventh and legged out a double. 2B Jorge Polanco (illness) also didn’t start but hit a pinch-hit double in the ninth.

Cubs RF Jason Heyward (concussion) is doubtful to return this season, Ross said. Heyward wants to return and will continue to undergo tests. Heyward was kneed in the head on a play at second against San Francisco on Sept. 11. … C Robinson Chirinos hurt his left side on a checked swing in the seventh and left the game.

RHP Michael Pineda (7-8, 3.74) will take the mound Thursday night when the Twins host the Toronto Blue Jays. Pineda allowed three runs in 5 2/3 innings to earn the win at Toronto on Sept. 17.

LHP Justin Steele (3-3, 4.20) and RHP Zach Davies (6-11, 5.49) will start Games 1 and 2 of a doubleheader Friday against the St. Louis Cardinals at Wrigley Field. Steele allowed two runs on four hits at Milwaukee and left with no decision in a 6-4 loss. Davies allowed four runs on six hits in 4 1/3 innings and left with no decision in an 8-5 loss to Milwaukee on Sept. 17.