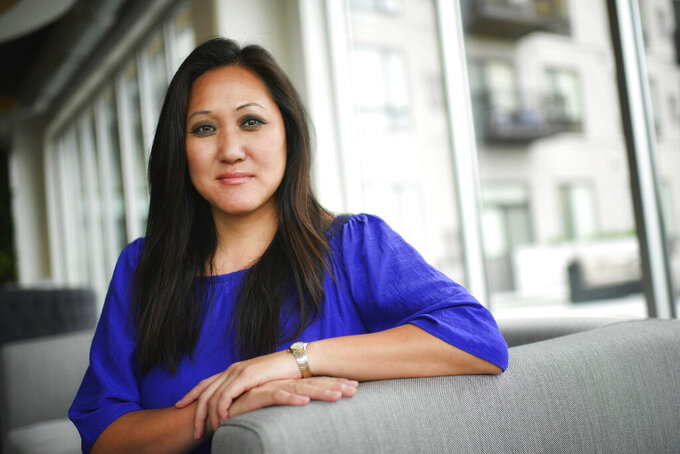 Glen Stubbe, ASSOCIATED PRESS
FILE - Jennifer Carnahan, then chairwoman of the Minnesota GOP, poses for a portrait in St. Louis Park, Minn., on July 19, 2017. State Rep. Jeremy Munson leads all candidates in fundraising for the special Republican primary for the open congressional seat of the late U.S. Rep. Jim Hagedorn, including his widow Jennifer Carnahan, but only because Munson lent his campaign $200,000 of his own money. (Glen Stubbe/Star Tribune via AP, File)

ST. PAUL, Minn. (AP) — State Rep. Jeremy Munson leads all candidates in fundraising for the special Republican primary for the open congressional seat of the late U.S. Rep. Jim Hagedorn, including his widow Jennifer Carnahan, but only because Munson lent his campaign $200,000 of his own money.

Friday was the deadline for filing congressional campaign disclosures with the Federal Elections Commission for the first quarter. They show that Munson had raised $302,234 including his loan, spent $5,090 and had $297,144 left in the bank as of March 31 for the May 24 special primary.

Carnahan, a former Minnesota GOP state chair, was further back with the other Republican candidates, who are all portraying themselves as staunch conservatives. They’ve all scrambled to get organized since the Blue Earth Republican died of kidney cancer Feb. 18. The winners of the primary will run in a special general election Aug. 9 to fill out the rest of Hagedorn’s term. The November election will determine who gets the seat in southern Minnesota's 1st District after that.

Fundraising doesn't guarantee victory but it's an important indicator of who's making headway in the tightly compressed political season. Name recognition can also be important in a field where most of the candidates are not widely known.

Munson, of Lake Crystal, is one of four members of the hard right New Republican Caucus, which broke from the main Minnesota House GOP caucus in 2019 over personality and ideological disputes. He's been touting his endorsements from national conservative leaders, including the chair and vice chair of the House Freedom Caucus, U.S. Reps. Scott Perry, of Pennsylvania, and Jim Jordan, of Ohio, plus former Minnesota GOP Chairman Keith Downey.

Former state Rep. Brad Finstad, of New Ulm, a former state director of USDA Rural Development for Minnesota during the Trump administration, raised $156,196, spent $5,980 and had $150,217 in the bank. He's been buoyed by endorsements from U.S. Reps. Michelle Fischbach and Pete Stauber.

Carnahan raised $151,396, spent $30,233 and had $121,163 left. She resigned under fire as state party chair last August, maintaining she was forced out. She denied allegations of fostering a toxic work environment and denied foreknowledge of any wrongdoing by major GOP donor and friend Anton Lazzaro, whose indictment on sex trafficking charges led to her downfall.

In another race that's drawing national attention, incumbent Democratic Rep. Angie Craig has a wide fundraising lead over GOP candidate Tyler Kistner. It'll be a rematch of their 2020 race, which Craig won narrowly. Redistricting moved the suburban-rural 2nd District westward, but didn't change the political balance much, so both are working hard to introduce themselves to their new voters.

U.S. Rep. Ilhan Omar faces a Democratic primary challenger in the Minneapolis-based 5th District. The FEC hasn't posted the report for former Minneapolis City Council member Don Samuels, a leader of the campaign that defeated a 2021 ballot measure to rein in police, but his campaign said he raised more than $350,000 and had more than $320,000 left. That ending bankroll wasn't far behind Omar, who raised over $1.9 million, spent nearly $1.6 million and had $492,972 left.