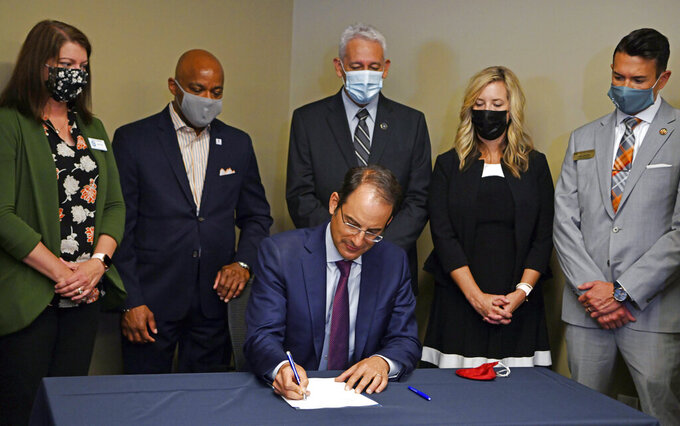 DENVER (AP) — The vast majority of the over $400 million that Colorado expects to receive from settlements of lawsuits filed over the harm caused by prescription opioids will be spread out across the state to be spent by local leaders under an agreement announced Thursday by a coalitions of cities and counties and Attorney General Phil Weiser.

The framework, developed through 18 months of negotiations, divides the state into 19 regions which together will share 60% of the settlement money. Decisions about how to spend that money will be made by governing boards made up of public officials from governments in the region. Another 20% will go directly to individual local governments, which can decide to spend that money on their own or to channel it to their county or designated region for projects that help a wider area.

Ten percent would go to an infrastructure fund to to help regions hit hard by the opioid epidemic develop treatment and recovery services.

The remaining 10 percent would go to the attorney general's office to address issues of statewide interest, such as helping to develop a workforce to work with people who are addicted to opioids and prevention and education programs.

“Our commitment today is toward healing, towards helping communities across our state do better and treat this disorder,” Weiser said at a press conference with representatives from county and city governments.

Logan County Commissioner Byron Pelton said rural Colorado has been affected disproportionately by substance abuse but lacks the resources that cities have to help treat people addicted to opioids. His county has also struggled to deal with the wider fallout from addiction, including the number of children who need to be removed from their parent's care because of substance abuse.

The closest drug treatment facility to Logan County's largest city, Sterling, is about 100 miles (160 kilometers) away in Greeley but the distance is even greater for some of the other nine counties in Colorado's northeastern corner that are grouped with it as a region under the settlement framework. Pelton hopes the area's share of the settlement money along with local and federal funding will make it possible to open two inpatient treatment centers in the vast but sparsely populated region.

Any city or county can receive a share of the settlement, whether or not they filed lawsuits related to the opioid crisis, as long as they agreed to the framework, the attorney general's office said. The money must be spent on things to reduce the harm that has been caused by opioid addiction, including drug treatment, recovery and prevention, as well as addressing the impact addiction has had on the criminal justice system.