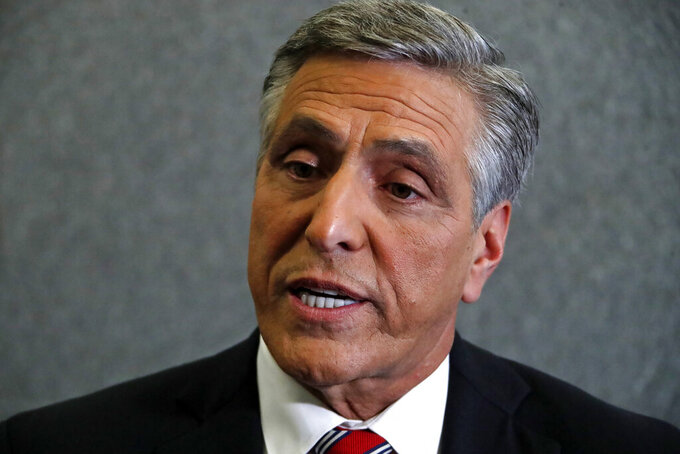 Gene J. Puskar, ASSOCIATED PRESS
FILE - In this Oct. 26, 2018, file photo, Lou Barletta speaks after a debate in the studio of KDKA-TV in Pittsburgh. Barletta, the Republican Party's Donald Trump-endorsed nominee for U.S. Senate in 2018, will run for governor of Pennsylvania, he told The Associated Press. Barletta becomes the most prominent figure to enter a 2022 governor's race that Republicans have won every time in the past half-century when there is an outgoing Democratic governor and a first-term Democratic president. (AP Photo/Gene J. Puskar, File)

Barletta, 65, becomes the most prominent figure to enter a 2022 governor's race that Republicans have won every time in the past half-century when there is an outgoing Democratic governor and a first-term Democratic president.

Barletta, a former Hazleton mayor and four-term member of Congress, has far more electoral experience than any other potential challenger for the GOP nomination. That includes having introduced himself to voters in a statewide campaign in his 2018 loss to Democratic U.S. Sen. Bob Casey.

“So people know me,” Barletta said in an interview. "I’m starting out with that advantage as well as I had 2.1 million votes in 2018. And that’s a good start as well.”

Barletta said that, if elected, he would focus on boosting the state's economy, while also aiming to overhaul Pennsylvania's election law and fight illegal immigration, a long-time pet issue for Barletta that helped build his political reputation.

Barletta’s only declared primary opponent is Joe Gale, a Montgomery County commissioner. After that, several others are seriously considering it. That includes U.S. Rep. Dan Meuser — who succeeded Barletta in Congress — and William McSwain, the top federal prosecutor in Philadelphia under Trump.

Besides being at ease in front of a microphone, Barletta has another strength in a Republican primary: a relationship with Trump.

Barletta was one of the first members of Congress to endorse Trump in 2016's Republican presidential primary.

He went on to serve as Trump's campaign co-chair in Pennsylvania that year and on Trump's transition team before becoming one of the former president's biggest allies on Capitol Hill.

Barletta ran for U.S. Senate in 2018 at Trump’s urging, and drew two Trump visits to Pennsylvania to help rally support for his candidacy, including one where Trump called Barletta a “star" and a “legend.”

Still, Barletta struggled to gain traction with voters, raise money or attract outside help, and got beaten by 13 percentage points in an otherwise difficult electoral year for Republicans. It was personally difficult for Barletta: his brother died and his 18-month-old grandson was diagnosed with cancer in the final weeks of the campaign.

Trump has made no endorsement in the governor's race, a year out from the primary.

“I would love his endorsement and I’m going to try to earn it,” Barletta said.

Barletta will likely be considered the front-runner in a GOP primary.

As mayor of Hazleton for more than a decade, Barletta gained national prominence for injecting immigration hawk politics into local government.

Barletta was mayor at a time when Hazleton's Hispanic population was surging. He argued that many of the recent arrivals were in the country illegally, bringing drugs, crime and gangs to his city of 25,000 and overwhelming police, schools and hospitals.

Accusing the federal government of failing to enforce immigration laws, Barletta got City Council to approve a pair of measures that would have denied permits to businesses that hired people in the country illegally and fined landlords who rented to them.

His strategy was copied by dozens of other cities across the country, but the laws were never enforced before the U.S. Supreme Court struck them down in 2014.

Barletta’s visibility on the immigration issue helped him politically, and he defeated 26-year incumbent Democratic Rep. Paul Kanjorski — on his third try — during the Republican midterm wave of 2010.

Following Trump's loss to Democrat Joe Biden, Barletta — like most in the GOP — has not disputed Trump's baseless claims that the election was stolen from him, despite no evidence of widespread fraud.

As one of Trump’s 20 hand-picked electors in Pennsylvania last year, Barletta told the Associated Press in December that “there’s no question there was fraud."

Barletta still maintains that he doesn't know for sure if the election was stolen from Trump: “No one knows that," he said. "Who can say for certain how much the election was changed to the difference that would have made? Nobody.”

Barletta said that, as governor, he would consider signing legislation to repeal universal mail-in voting, leaving only the constitutionally authorized absentee ballot for voters who meet a narrow set of excuses.

“I would consider signing it because I believe it’s ripe for fraud,” Barletta said. “I think it encourages the chances.”

Prosecutors have turned up a handful of cases in Pennsylvania of people trying to vote by mail for a dead mother or wife, but nothing even remotely approaching Trump's false claims that have been thrown out of court for lack of evidence.

Barletta would also bring the governor’s office into the fight against illegal immigration, he said, pitching it as a way to protect American workers' jobs and wages.

“As the mayor (of Hazleton), I was sued for wanting to enforce federal laws, and now we have mayors who literally are thumbing their nose and have created sanctuary cities, inviting literally people who were in the country illegally to those towns,” Barletta said. “That would not happen if I’m governor.”