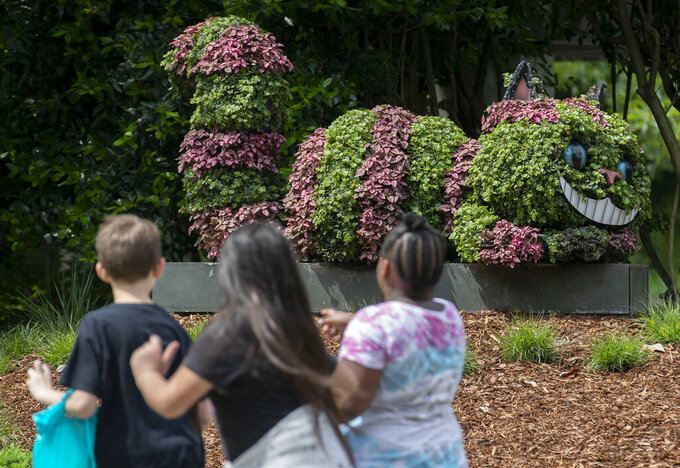 Christine Tannous, ASSOCIATED PRESS
A Cheshire Cat planting grins at passing viewers in the “Alice’s Adventures in the Garden” exhibit at Memphis Botanic Garden Tuesday, May 10, 2022, in Memphis, Tenn. The exhibit will remain open until Oct. 31. (Christine Tannous//The Commercial Appeal via AP)

At the Memphis Botanic Garden, it has inspired foliage.

To be more specific, the Queen with her flamingo croquet mallet, the Cheshire Cat with his magical grin, the deck-of-cards soldiers and young Alice herself have been brought to literal if botanical life in the form of “mosaiculture” sculptures, placed within the attraction’s grounds for an exhibit titled “Alice’s Adventures in the Garden.” (Like most adaptations of “Alice,” the exhibit also borrows elements from Carroll’s 1871 sequel, “Through the Looking Glass.”)

If topiary is the art of forming trees and shrubs into sculpture-like shapes, “mosaiculture” is the art of creating large topiary-like sculptures by affixing beds of plants onto steel armatures. The plants within the beds — red and white begonias, “blue baby’s tears,” color-splashed “polka dot plants” — give form and color and definition to the subjects.

If that sounds technical, the results might be described as — to use a word that in fact never appears in the texts of “Alice” or “Looking Glass” — magical.

“It’s very rewarding to be here and hear children come by and freak out, and even hear adults say, ‘I can’t believe it,’” said Botanic Garden worker Marianne Spengler, as she trimmed one of the 9-foot-tall plant-shrouded pawn sculptures in the garden’s “Chess Set” tableau, which recreates the famous scene in which Alice becomes part of a giant game of living chess pieces.

“I love my job,” Spengler enthused. “It’s so rewarding to work with these sculptures and to know I helped make them beautiful.”

Presented by International Paper, “Alice’s Adventures in the Garden” is the Botanic Garden’s first attempt in the post-pandemic shutdown era to mount what marketing director Olivia Wall called a “seasonal exhibition.”

Such exhibitions, she said, are “a way to add something new and original,” to augment the 30 “specialty gardens” — the Japanese garden, the herb garden, the iris garden, and so on — that already dot the attraction’s 96 scenic acres on Cherry Road in East Memphis, adjacent to such similar sanctuaries of natural beauty within an urban landscape as Audubon Park and the Dixon Gallery & Gardens.

Previous “seasonal exhibitions” have included an “Origami” sculpture show in 2019, and “Big Bugs,” a 2017 installation of wooden sculptures of giant insects and arachnids.

Perhaps because it’s more horticulturally based than those predecessors, “Alice’s Adventures in the Garden” could prove to be the Botanic Garden’s most popular exhibit, said Michael D. Allen, garden executive director.

He said about 2,500 people visited the exhibit for its opening day May 8 (Mother’s Day), and he expects close to 10,000 schoolchildren to see “Alice” before the exhibit closes at the end of the year. (As currently designed, “Alice” runs through Oct. 31; after that date, the armatures will remain, but the plant beds will be replaced with holiday lights for the winter.) About 240,000 people visit the Memphis Botanic Garden annually.

“Alice’s Adventures in the Garden” includes four sculptures or sculpture groups: The almost 6-foot-long Cheshire Cat; the “Chess Set” group; the 19-foot-tall “Queen,” whose flamingo croquet mallet is poised to knock a hedgehog ball under the wicket-like bent back of one of her playing-card guards; and “Alice” herself, also 19 feet tall — and some 23,600 pounds in weight.

In addition, eight interpretations of Carroll’s rabbit characters have been created by local artists and set, like Easter Eggs, around the Botanic Garden. Paige Warner’s sculpture depicts a rabbit balancing a stack of tea cups, while Angela Wheeler created a bench that contains a stained-glass portrait of the White Rabbit.

Other “Alice”-themed activities and events will occur throughout the year. Some are not for kids; for example, the Memphis Made brewery is developing special beers to coincide with the exhibit, including the Cheshire Cat Nap, the Red Queen Red Ale and Down the Rabbit Hole. “901-derland” caps and other souvenirs are sold in the gift shop.

The exhibit was designed by and first shown at the Atlanta Botanical Garden; Memphis is its first stop since its debut. Four refrigerated FedEx trucks brought the living sculptures to Memphis, while Barnhart Crane installed the gargantuan pieces on the garden grounds.

Each sculpture is essentially a steel armature covered in shallow plant beds that are filled with soil mixtures and covered with landscape fabric that holds the soil in place (even on vertical armatures) as the plants grow outward, like shag on a carpet. Different plants provide different textures and colors. For example, Alice’s blond hair is represented by a flowering Alternanthera, better known as yellow Joseph’s coat. Meanwhile, the hedgehog that functions as a croquet ball is covered in carex, a spiky, grass-like species. Almost every sculpture requires thousands of individual plants, which are watered every day and trimmed about every two weeks.

Standing on a ladder and giving the Queen what might be called a full-body shave with a pair of sheep shears, Sennett Holcomb, event production manager at Memphis Botanic Garden, “manipulated” — his word — the foliage with tonsorial precision and artisanal sensitivity. He said the goal is to encourage the plants to spread out thickly across the surface of the sculpture rather than to elongate.

For more information on the garden, “Alice” and related events, visit membg.org.