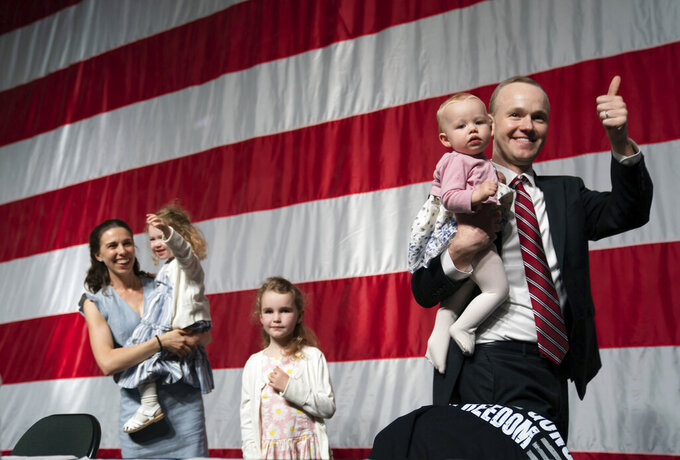 Glen Stubbe, ASSOCIATED PRESS
GOP attorney general candidate Jim Schultz leaves the stage with his wife Molly and their children during the first day of the Minnesota State Republican Convention, Friday, May 13, 2022, at the Mayo Civic Center in. Rochester, Minn. (Glen Stubbe/Star Tribune via AP)

MINNEAPOLIS (AP) — Republican gubernatorial candidate Scott Jensen has escaped any serious challenge from within GOP ranks, but other party-backed candidates for attorney general and the southern Minnesota congressional seat left vacant by the death of U.S. Rep. Jim Hagedorn will have hurdles to clear in the state's Aug. 9 primary.

Former Hennepin County Sheriff Rich Stanek, who had been considering a primary run but is recovering from injuries he suffered in an auto accident, cleared the lane for Jensen when he failed to file at the secretary of state’s office by the 5 p.m. Tuesday deadline. Jensen won the GOP endorsement at the party’s state convention last month.

Meanwhile, Democratic Gov. Tim Walz got a boost when former broadcast personality Cory Hepola, who was backed by Andrew Yang’s Forward Party, also failed to file by the deadline. Democratic strategists had feared that Hepola could serve as a spoiler and siphon votes away from Walz in the November election. Hepola said in a statement that Minnesota still needs a strong third party “to represent the majority in the middle.” The secretary of state’s office was still in the process of verifying the petition signatures submitted by Hugh McTavish of the Independence-Alliance Party, who announced his candidacy in April.

While neither Jensen or Walz will face more than token primary opposition, two small pro-marijuana parties that have major party status in Minnesota will have candidates on the November ballot who could be factors if it’s a close race.

In the attorney general's race, Doug Wardlow, general counsel to MyPillow, who was the losing GOP candidate in 2018, went through with his plan to challenge endorsed candidate Jim Schultz, despite pleas by party leaders that he abide by his earlier pledge to honor the state convention's choice. Wardlow is an ally of MyPillow founder, Mike Lindell, a leading proponent of false accusations that the 2020 election was stolen from President Donald Trump.

Wardlow said in a statement that only he can beat incumbent Democratic Attorney General Keith Ellison.

But Republican Party of Minnesota Chairman David Hann said in a statement that Wardlow broke his word “and has instead proven himself to be a shameless politician motivated only by his personal ambitions. Doug Wardlow has an infamous track record of failed election bids. With this futile primary challenge, he will add one more loss to his record.”

In the Republican-leaning 1st Congressional District race, state Rep. Jeremy Munson and agricultural attorney Matt Benda revived their efforts to win the seat left open by Hagedorn's death from cancer in February, in a process that voters may find confusing.

But Munson, who is a founder of a hard-right faction among Republicans in the Minnesota House, and Benda will get another shot the same day in the regular primary election, which will select candidates for filling the seat in the next Congress. That sets up a theoretical possibility in which one man is elected Aug. 9 to complete Hagedorn's term, but 1st District voters send someone else to Congress in the November general election. Ettinger faces only token opposition in the regular primary.

Hann said in a separate statement that he was “strongly disappointed” to see Benda and Munson file, given that 1st District Republicans overwhelmingly endorsed Finstad at a special meeting Thursday. Hann said that Benda and Munson, as former local party officers, should have had more respect for the party's endorsement.

This story was first published on June 1, 2022. It was updated on June 2, 2022, to correct it to say that gubernatorial candidate Hugh McTavish of the Independence-Alliance Party did file his petition by the deadline, but that the secretary of state’s office was still verifying the signatures.