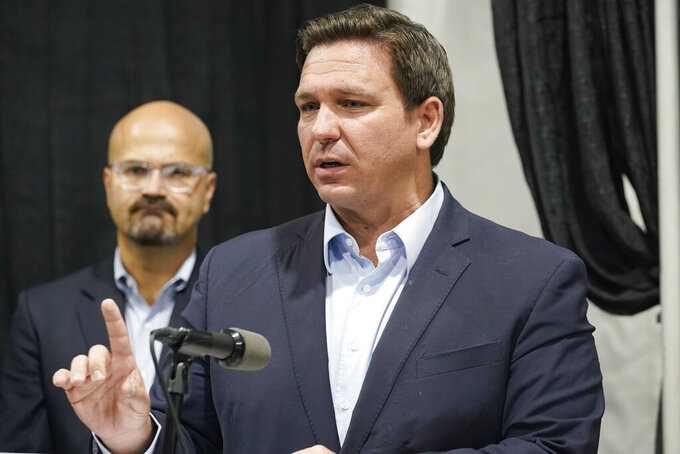 The Republican governor said he will convene a special session of the GOP-controlled statehouse in November to address vaccine requirements. He didn't specify a starting date.

“At the end of the day, you shouldn’t be discriminated against based on your health decisions,” he said during a news conference. “We want to provide protection for people, we want to make it clear that, in Florida, your right to earn a living is not contingent upon whatever choices you're making in terms of these injections.”

In broad terms, DeSantis outlined policy goals for the special session, including holding businesses liable for adverse reactions to vaccines, removing legal liability protections for employers with vaccine mandates and added protections for people fired for not being vaccinated.

DeSantis has for weeks criticized White House plans to require vaccinations and vowed to fight such rules in court. His administration has also fined local school boards who defied a state ban on mask mandates in classrooms and has moved to withhold funding from districts that receive federal grants meant to blunt the state’s fines.

The announcement appeared to catch at least one legislative leader off-guard. Shortly after the governor's news conference, GOP Florida House Speaker Chris Sprowls told lawmakers that his office had no additional details about the session.

Democrats were quick to criticize the governor's plan.

"He's behaving like the dictators that supposedly we all hate," said state Sen. Annette Taddeo, who this week announced she is running for governor. “Why are we telling private businesses what they can and cannot do?”