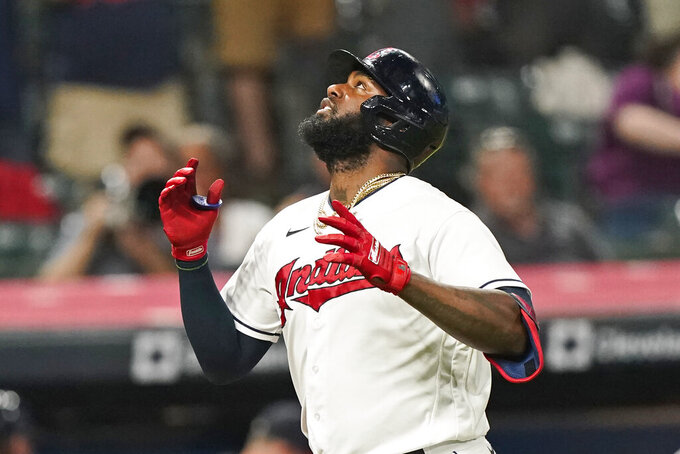 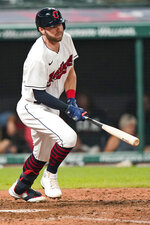 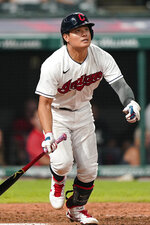 CLEVELAND (AP) — Franmil Reyes drove a 451-foot home run into the left field bleachers — one of four solo homers hit by Cleveland — and the Indians beat the Texas Rangers 7-2 on Wednesday night.

Reyes’ blast off Wes Benjamin in the seventh landed about two-thirds of the way up the bleachers and was his 23rd of the season, capping a big night for Cleveland’s offense.

Reyes has homered three times in his last six games after going through an extended slump.

”It’s good to see that he’s kind of breaking out of it and with that threat of the home run, you’re always kind of in the game if you get some men on base in front of him," interim manager DeMarlo Hale said.

Latz (0-1) took the rotation spot of right-hander Dane Dunning, who became the sixth Rangers player to be placed on the COVID-19 injured list.

Mercado homered to the bleachers in left with one out in the second. Chang’s towering fly ball barely cleared the wall in right with one down in the fifth. Hedges homered around the foul pole in left two batters later.

Zach Plesac (8-4) dodged trouble in each of the first five innings before giving up Jason Martin’s two-run homer in the sixth that cut Cleveland’s lead to 3-2.

Andy Ibañez drew a one-out walk in the sixth and Martin followed with his homer to right on an 0-2 pitch. Plesac was pulled after Jose Trevino’s two-out double, but James Karinchak struck out Yonny Hernández.

Plesac allowed two runs and scattered eight hits in 5 2/3 innings. The right-hander struck out DJ Peters with the bases loaded to end the third and Texas stranded eight runners in the first six innings.

“Those are the games when you don’t have your best stuff, you still can go give yourself a chance and your team a chance to win,” Hale said. "That says something about him.”

The Rangers have been forced to make a flurry of roster moves over the past several days. Catcher Jonah Heim, infielders Charlie Culberson and Brock Holt, and right-handers Drew Anderson and Mike Foltynewicz were previously placed on the COVID-19 list. Right-hander Spencer Howard is not with the team because of health and safety protocols.

Latz, an Illinois native who pitched at nearby Kent State, had his contract selected from Triple-A Round Rock. He was given a nice hand when was pulled from the game in the fifth. Latz allowed three runs and five hits in 4 2/3 innings.

Latz said his parents, an uncle, several friends and members of the Kent State coaching staff were in attendance, a group that could be heard while he was on the mound. Latz was scratched from his minor league start Monday and informed Tuesday he'd be starting against the Indians.

“It's been pretty wild,” Latz said of the previous two days. “Every one of these stories you hear of guys coming up it's very crazy. I was smiling the whole time and really excited to get out there and try to take it all in.”

“Sometimes when guys are making their major league debut you're not quite sure how they're going to respond but the composure he showed throughout the night was pretty impressive,” Rangers manager Chris Woodward said.

The Indians placed right-hander Triston McKenzie on the 10-day injured list because of shoulder fatigue. McKenzie dominated in winning his last two starts, allowing one run and three hits with 19 strikeouts in 15 innings.

President of baseball operations Chris Antonetti said manager Terry Francona, who stepped down for the season last month, has been at Progressive Field to watch parts of recent games with the front office staff. Francona is recovering from hip surgery and is preparing to have an operation on his left foot.

Indians: 1B Bobby Bradley (sore knee) was was hitless in three at-bats and drew a walk in a minor league rehab game at Class Lake County on Wednesday night.

Rangers: RHP Jordan Lyles (6-10) will start the series finale after being moved up a day in the rotation. He allowed one run in seven innings against Boston on Aug, 21, his first win since July 9.

Indians: LHP Sam Hentges (1-4) will start Thursday. He pitched four innings when he started against the Los Angeles Angels on Aug. 20.