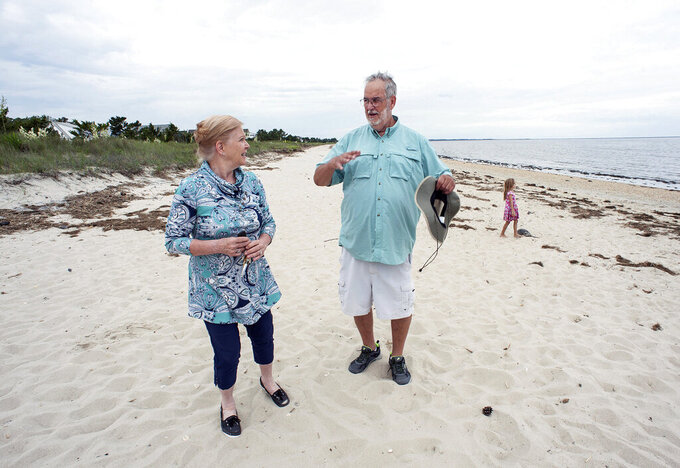 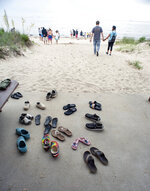 SLAUGHTER BEACH, Del. (AP) — As many Delawareans flock to Rehoboth and Dewey beaches this time of year, one of the state’s lesser-known coastal towns is experiencing revived tourism.

For some, Slaughter Beach’s horseshoe crabs, red knots and other wildlife win out over shopping, the boardwalk and nightlife.

A town with only two businesses, the northern Sussex County spot is experiencing an uptick in visitors interested in ecotourism, according to Mayor Bob Wood, who said its popularity is unlike anything he has seen since he’s lived there.

Mayor Wood, originally from Baltimore, bought a Slaughter Beach house with his wife in December 1999, vacationing at the home before moving there permanently in 2016. He said that, though the town has been gentrified over the years, the recent boost of ecotourists mirrors an early boom in the area’s history.

He hearkened back to when the town was incorporated in the 1930s.

“You’ve got to think, there was no Bay Bridge back then, and Rehoboth was really still a religious destination at the time. In Slaughter Beach, there were hotels, a dance hall, a boardwalk that people in this area wanted to go to,” Mayor Wood said.

“People came to visit Slaughter Beach during that time, but as Rehoboth comes along, as the Bay Bridge comes along and as Ocean City (Maryland) gets more and more popular, our beach went back to being that sleepy, fishing village type of place.”

The 250-resident town, founded in 1681 and incorporated in 1931, has remained that type of destination for ecotourists who visit year-round. Mayor Wood said that, during the summer, Slaughter can see 800-900 visitors at any given time and that he has noticed more day-trippers in the last year than ever before.

Sixteen residents rent their homes during the summer, Mayor Wood said, speculating that many ecotourists use these accommodations.

The mayor first realized the rise in such tourism as the calendar approached horseshoe crab-mating season, typically between May and June. He said that, walking through town, he noticed that all the rentals were full and some visitors had created campsites.

After talking with locals, he learned that the campers were bird enthusiasts, searching for some of the region’s most notable shorebirds, like sanderlings, semipalmated sandpipers and red knots.

“The ecosystem in this area is very unique. Each species works together and plays their role, like the horseshoe crabs will bring in the red knots, sanderlings and other shorebirds. The horseshoe crabs and the red knots are the rock stars, but ultimately, people come here to see the nature,” Mayor Wood said.

Though there will always be an audience for the town’s wildlife, he said the increase in ecotourism could be attributed to recent efforts to protect the environment in Slaughter Beach.

In August 2021, a study by the University of Maryland Environmental Finance Center found that Delaware’s Mispillion and Cedar Creek watersheds — which encapsulate much of the Milford and Slaughter Beach area — provide millions of dollars to nearby communities and their residents via wildlife viewing and outdoor recreation. Specifically, the report said that Milford’s Abbott’s Mill Nature Center generated up to $6.3 million annually from visitor activity and that Slaughter Beach wildlife activity generated more than $1 million.

The study was led by The Pew Charitable Trusts in collaboration with the Waterways Infrastructure & Investment Network, which aims to capitalize on the economic value of the two watersheds by exploring investments to protect them and encourage ecotourism. The network consists of stakeholders in the Resilient and Sustainable Communities League, including Delaware Sea Grant, the Delaware Department of Natural Resources and Environmental Control, the Partnership for the Delaware Estuary and the Delaware Department of Transportation.

WIIN will develop management plans and potential investments to protect the area from dangers created by climate change, such as reduced coastlines that increase flood risk. These projects will be funded through a federal grant provided by the National Oceanic and Atmospheric Administration and match dollars from Delaware Sea Grant, The Pew Charitable Trusts and others, totaling over $220,000.

“Our whole job is to support the capacity of Delaware’s communities and undertake planning to be more resilient to weather and climate changes. We’re about capacity building. Milford and Slaughter Beach are relatively small towns in Delaware, and when you have a town like Slaughter Beach, where it’s mostly a volunteer government, they don’t have the capacity to go after major federal grants and implement projects, so RASCL and WIIN go a long way in bringing partners to the table to help them,” she said.

The area surrounding the Mispillion and Cedar Creek watersheds — which cover nearly 130 miles of the state’s coastline — is one of the largest, undisturbed tracts of natural resources in Delaware, Ms. Swallow added. And in addition to being a horseshoe crab sanctuary, Slaughter Beach is in the path of an internationally recognized flyway for migrating birds, who feast on those animals’ eggs.

Ms. Swallow said it is important to secure funding to build resiliency to climate change, as well as encourage economic opportunity in the region through nature. In Milford, this includes capitalizing on the Mispillion River by expanding the community and inviting commercial development. In Slaughter, initiatives focus on eco-friendly investment.

After examining these factors, a variety of eco-friendly investments will be considered, like more kayak launches on the Mispillion River, a more consistent bike route between Milford and Slaughter Beach, birding platforms throughout the towns and environmentally friendly businesses, Ms. Swallow said.

The stewardship of residents in these small communities shows how much Delawareans care about the state’s wildlife and natural resources, she added.

“We’re a conduit to demonstrate the value and the opportunity that exists to invest more into Slaughter Beach and in the area because there will be a great return on investment if we protect those natural resources,” Ms. Swallow said.

“In towns like Slaughter Beach, they are very, very environmentally conscious. They really care for wildlife; they’ll flip over the horseshoe crabs when needed, and they’ll maintain the health of their resources. There’s a certain way of life that people in these communities are really keen to protect, and I think it’s important for us to always try to support these small towns and the rich, natural resources that are around them.”

According to Mayor Wood, though Slaughter may not be bustling with tourists, it offers a different encounter vacationers will not get anywhere else.

“It’s a different vibe, for sure. It’s a different type of relaxation; some people like going out on the boardwalk or partying, while others may enjoy looking at nature. There is nothing wrong with either, but it gives people the option to see the natural beauty in our state,” he said.

“You can have a different experience in Slaughter Beach, and I think people have realized that, when you think about beaches in Delaware, it’s not all just Thrasher’s, Dolle’s and Candy Kitchen.”