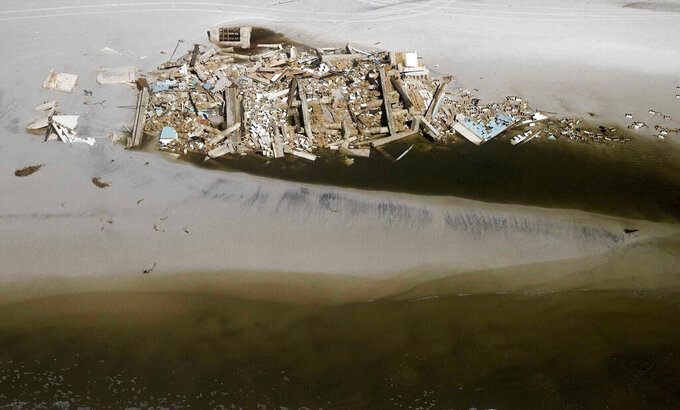 She’s rebuilt the porch that was ripped from the side of her house facing the Gulf of Mexico, replaced windows and repaired the septic and air conditioning systems. She couldn’t get into the house for six months because its stairs were shorn off by double-digit storm surge. For the first year she, and many others, were still removing debris.

Despite the ongoing repairs that come with a Category 5 hurricane, she’s gained a sense of community and with the loss of her seawall now has a new set of visitors to look forward to every year.

“Once the sea wall came down it opened up the ability for sea turtles to come nest,” McNabb said. “I’ve had a sea turtle nest every year since then.”

She bought the house just five months before Michael began to well up off the Yucatan Peninsula and began its powerful slog to landfall in Mexico Beach almost 100 miles to the west on Oct. 10.

McNabb would travel from Atlanta to the point for vacations but after the loss of a close relationship, she moved to Alligator Point fulltime. At first she didn’t know many people, but has since gotten to know her neighbors and built a community that’s working side by side, putting the pieces of their lives back together.

The move was also a chance for personal growth.

“Rebuilding after the hurricane was symbolic for me rebuilding my life. Then the turtles came,” she said. “If the turtle can get through that debris, I can figure this out and get through life. A lot of bad things happened from the hurricane, but for me it was almost regenerative.”

Up until Michael, McNabb wasn’t much of a tropics watcher. The storm has changed her perspective and she’s more in tune with weather patterns from May to November.

“I really had only had the house for five months so I had no idea what to expect,” she said. “Every time there’s a storm, I’m very anxious for several reasons.”

The main reason: Ongoing issues with Alligator Drive washing out, a problem since the 2000s, when it first was churned up by Hurricane Dennis.

But the Franklin County Commission is working to remedy that.

A $5.2 million allocation in March by the Federal Emergency Management Agency is helping to fund not only rebuilding of the road, but shoring up the seaward side to protect against future storms.

Commissioner Bert Boldt said the project to reconstruct 1,250 feet of road between Tom Roberts and George Vause roads is about half done after work started in June.

Adjoining the asphalt are large boulders and rip rap in front of a new seawall that provide underground protection from storm surge, which in the past has carved under and destroyed the road.

Boldt said the estimated completion date is in early December.

A new beach in the making?

He said an additional layer of protection is being bandied about, the creation of a beach in front of the road once it’s complete. To do so would require dredging sand just off the shore and redistributing it for a mile in each direction.

A sticking point is how to fund ongoing maintenance of the beach in the years to come.

“It’s estimated it will cost $10 million to dredge up the new beach the first time and part of it could be funded from other sources,” said Boldt, who said they are exploring other financial avenues for the initial project.

There have been ideas of levying a tax to fund maintenance down the line as well as creating a parking lot and bathroom area where admittance could be charged.

“This is still big theory,” Boldt said. “Nothing is final on that issue, and I’m sure we’ll be debating it for a year.”

He said over the years, the county has poured millions into temporary fixes of Alligator Drive. But to see it being shored up in a way that hopefully alleviates anxiety every time a storm comes through is promising.

“What it really shows is the great steward the county is of the worst road in Florida. How we have babied that road and maintained it and backfilled it,” he said. “Over 30 years we’ve spent $3 million on materials and labor to make that road passable. I think it’s going to be a solid repair.”