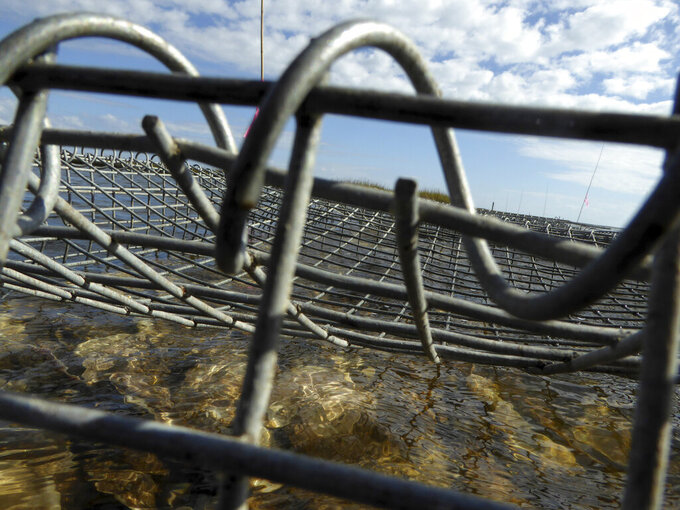 Janet McConnaughey, ASSOCIATED PRESS
FILE - In a Friday, Nov. 18, 2016, file photo, recycled oyster shells are seen in a gabion basket in Lake Athanasio, as part of a reef that was constructed in St. Bernard, La. An environmental group that makes oyster reefs from shells collected at restaurants now has a new partner so anyone can contribute. (AP Photo/Janet McConnaughey, File)

NEW ORLEANS (AP) — An environmental group that makes oyster reefs from shells collected at New Orleans area restaurants now has a new partner so anyone can contribute.

“After enjoying oysters at home with family and friends, you can help protect our coast" by bringing shells to a public drop-off, said Kellyn LaCour-Conant, restoration programs director at the Coalition to Restore Coastal Louisiana.

The organization has created four reefs with shells collected from restaurants since it began the “Restaurants to Reefs” program in 2014.

The Green Project, which runs a salvage store and paint recycling project, now has purple oyster collection bins outside, the coalition said in a news release Friday. People can drop off their empty oyster shells from 11 a.m. to 5 p.m. Wednesday through Saturday.

Another environmental recycler had been doing that. But Glass Half Full had to pause that after Hurricane Ida hit in late August, the news release said.

Reefs provide homes and nurseries for hundreds of kinds of marine animals and plants. Each oyster can filter up to 25 gallons of water a day. And the reefs slow down the waves that chew continually at Louisiana’s coast.

The coalition's recycling program has used more than 5 tons (4.5 metric tons) of shells to build 1.3 miles (2.1 kilometers) of living shoreline.

Twenty-three restaurants paid for the pickups before the COVID-19 pandemic, coalition spokesman James Kelly said in an email.

“All shell collection in the city ceased when restaurants closed down in the early days of the lockdown here. So we went to zero restaurants overnight and then have been slowly rebuilding the program,” he said in an email. He said 13 are participating now.

The Chef’s Brigade, which ran a meal assistance program during the pandemic’s first wave, has helped recruit restaurants, he said.

The four reefs created so far are in Biloxi Marsh, Barataria Bay, Pointe-au-Chien, and Adam’s Bay. The organization plans to expand the Pointe-au-Chien reef in summer 2022.

The Nature Conservancy is working toward an oyster shell recycling program in Mississippi.

At least 13 other states have had such programs. A pre-pandemic survey found them in Texas, Alabama, Florida, nine East Coast states and California, Tom Mohrman, The Nature Conservancy’s director of marine programs, said earlier this month.