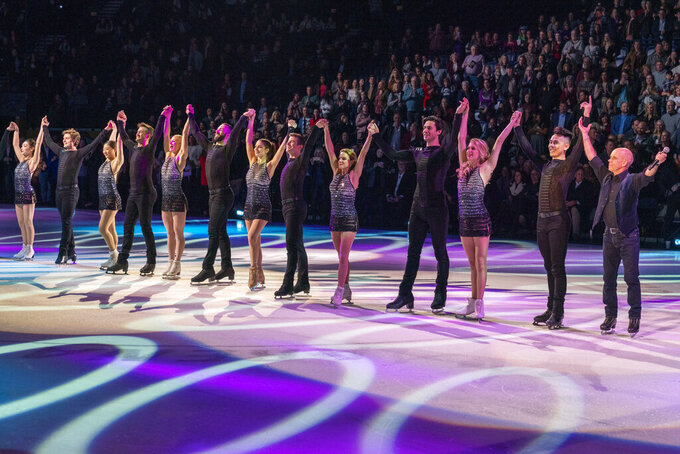 Uncredited, ASSOCIATED PRESS
In a photo provided by Scott Hamilton LLC, Scott Hamilton and all participating skaters at the 2018 Scott Hamilton & Friends event take a bow in Nashville, Tenn. This year's show will will focus on the fight to conquer glioblastoma, a particularly deadly form of cancer. (Ed Rode Photography/Scott Hamilton LLC via AP) 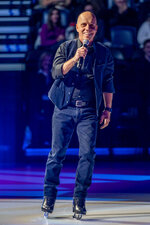 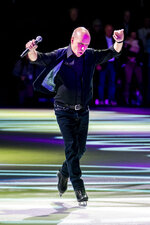 Scott Hamilton always will be known as an Olympic gold medalist.

Another part of his legacy is establishing a place for figure skaters to earn a living after their competitive careers when he created the Stars on Ice tour in the 1980s.

What Hamilton, a cancer survivor, is doing now with his foundation (ScottCARES.org) could dwarf all of his other achievements. His fifth annual Scott Hamilton & Friends event at the Bridgestone Arena in Nashville on Nov. 21 will focus on the fight to conquer Glioblastoma, a particularly deadly form of cancer.

The show, which will feature a bevy of Olympic skaters, including champions Katia Gordeeva and Ilia Kulik, plus such musical stars as Lady A, Grace Potter, Maren Morris, For King & Country, and Cece Winans, also will pay tribute to Michael Busbee, the Nashville songwriter, record producer, publisher and instrumentalist who passed away in 2019 from the disease.

“The statistics are getting worse for people with cancer,” Hamilton says. “They were trending better but COVID denied people the ability to get the care they needed. It's been a pretty rugged year for people trying to get through cancer.”

The show's focus on Glioblastoma is two-pronged, inspired by both Busbee and Scott Williams, an Arkansan who reached out to Hamilton's organization as he was going through treatment.

“Scott heard about me and picked up my book, `The Great Eight,' and decided he wanted to help us raise money for Glioblastoma brain cancer research," Hamilton says. "He wanted to ride a bicycle the length of the Natchez Trace Parkway, 444 miles. We thought, `What in the world?' Scott felt he was called for this."

Hamilton put Williams in touch with a fellow cyclist working within the organization, and the two of them completed the trip on time despite running into obstacles that included a tornado.

“Scott was bringing us something powerful and unique,” Hamilton says, noting that they received donations from 27 states and three countries. “He brought us a focus on a form of cancer that really has no hope, but he gave us hope. He gave us an understanding that with that tireless hope you could accomplish remarkable things.”

Busbee's family and many of his artists readily got involved in the concert/skating show. Proceeds will fund Glioblastoma research through the Scott Hamilton CARES Foundation dedicated to changing the future of cancer by funding advanced, innovative research that treats the cancer while sparing the patient.

“We talked to his his wife, Jessie, and said we would really like to celebrate Busbee’s life and music in this show, and try to bring together as much financial resources as possible to fund research,” Hamilton explains. "She said absolutely and reached out to Busbee’s artists so we could put a spotlight on this gentleman and celebrate his life and memory.

“We believe in God-scheduled opportunities and we really want to do the best we can and the most we can for Busbee and his wife Jessie and the family and his music. And try to change the outcome for people with this form of cancer.”

Potter, a three-time Grammy nominee, has a background in skating and even told Hamilton she'd like to be on the ice during rehearsals. He joked that maybe she could perform a song while skating.

The performances will range from songs from each artist's catalog to Busbee's wide-ranging music.

“It has been a humbling honor to be involved in this year's CARES benefit with Scott Hamilton,” Jessie Busbee says. “He and his team are warriors for cancer research, and I truly believe the event this year has the potential to be a major marker in the fight against Glioblastoma — the deadliest form of brain cancer. My beloved husband’s life, ultimate death, and legacy has opened a door to making some major strides in the realm of glioblastoma research and treatment.”

Hamilton promised “a couple of surprises” at the event, which is not being televised — though he would welcome any outlet interested in broadcasting the show.

“The only time this show will be performed and the only ones who will see it,” he says, “will be present in the Bridgestone Arena.”