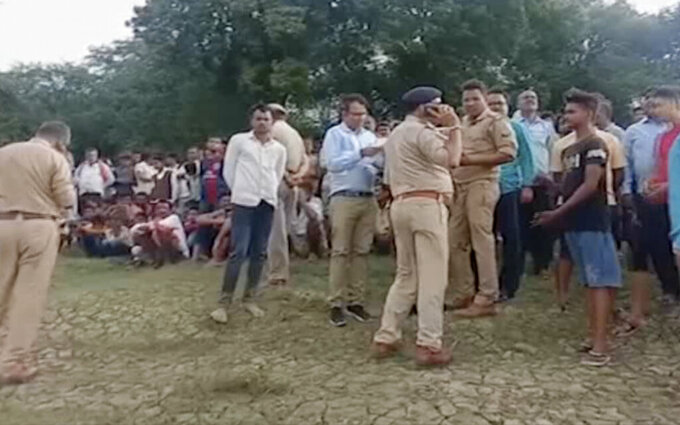 Uncredited, ASSOCIATED PRESS
This image from video shows people who gathered on the banks after a large rowboat taking villagers to a festival capsized in a flooded river in Banda district of Uttar Pradesh state about 250 kilometers (160 miles) southwest of Lucknow, India, Thursday, Aug.11, 2022. (K K Productions via AP)

LUCKNOW, India (AP) — A large row boat taking villagers to a festival capsized in a flooded river in northern India on Thursday, leaving at least three people dead and 16 others missing, police said.

A strong wind rocked the boat, which was carrying about 30 people, police officer Mohammed Nisar said. Some passengers were able to swim to safety, he said.

The villagers were traveling to a nearby village in Banda district of Uttar Pradesh state to celebrate a Hindu festival. The area is about 250 kilometers (160 miles) southwest of Lucknow, the state capital.

Heavy rains have caused floods and landslides in northern India during the June-September monsoon season.

Boating accidents are common in the country, where many vessels are overcrowded and have inadequate safety equipment.

In September 2020, 12 people drowned when a sightseeing boat capsized on the swollen Godavari River in the southern state of Andhra Pradesh. In May 2018, 30 people died when a boat carrying local people capsized in the same region.