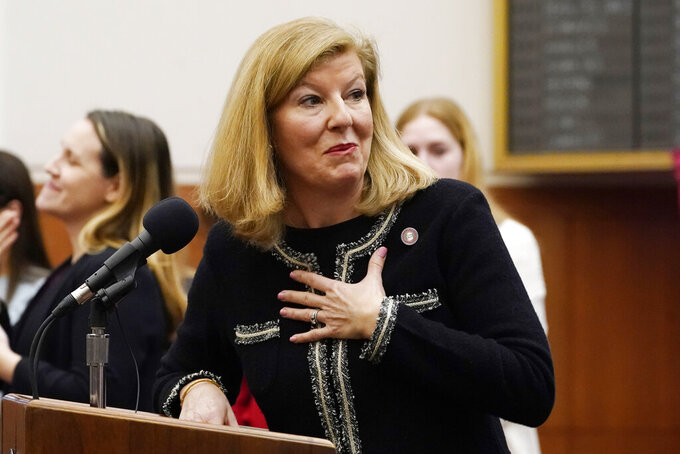 RICHMOND, Va. (AP) — Virginia's teacher workforce is smaller, unhappier and less qualified than before the COVID-19 pandemic, Virginia's nonpartisan legislative watchdog agency said in a report Monday that urged the state to boost funding to address the issue.

“We all knew in our hearts and from our personal experiences that COVID-19 had unbelievably terrible impacts on our families and on our children. And now, as we all just heard, we have hard data — cold hard data — telling us that we are in crisis," Secretary of Education Aimee Rogstad Guidera told lawmakers after the presentation in Richmond.

To compile its report on the pandemic's impact on public K-12 education, JLARC staff reviewed academic research; conducted interviews and focus groups; analyzed data on school staffing, assessments and academic outcomes; and conducted a survey of all school divisions and a “representative” sample of school staff.

School district leaders overwhelmingly told the commission that the pandemic had made it more difficult to recruit and retain teachers.

In August, the Virginia Department of Education collected data from 111 school divisions and found about 3,300 teacher vacancies, which marked a 25% increase from what those divisions had reported in October 2021. A growing number of teachers are also either not fully licensed or out-of-field — meaning they are teaching a subject different than their area of certification — according to the report.

In responding to JLARC's survey, teachers cited issues ranging from student behavior and mental health, to low pay, a “lack of respect” from parents of the public and a higher workload because of vacancies as contributing to lower job satisfaction, the report said.

District leaders thought “higher-cost, longer-term changes” like raising salaries, reducing class sizes and minimizing standardized testing would be most helpful in addressing those concerns, according to the report.

JLARC also highlighted problems with students who missed class or didn't have the necessary internet access or technology to fully participate in virtual learning during the height of the pandemic.

About 19% of students statewide were chronically absent — missing 10% or more days — in the 2021-2022 school year, only part of which was due to quarantining and illness, the report said.

After students returned to in-person learning, behavior was a major problem, school staff told JLARC, with most reporting that both the number and severity of behavioral issues had increased.

Half of school staff also reported that student anxiety or mental health were a “very serious issue,” the report said.

The report, which found high vacancy rates for school psychologists, recommended that the General Assembly allow psychologists in other fields to become provisionally licensed for a school setting.

“I hope that there’s a substantial, meaningful position by the governor in the budget to fund these schools,” he said.

Youngkin will release a budget proposal to lawmakers later this year that will serve as a starting point for the 2023 General Assembly session. He's also previously called on school districts to get to work allocating previously unspent federal relief money earmarked for education.