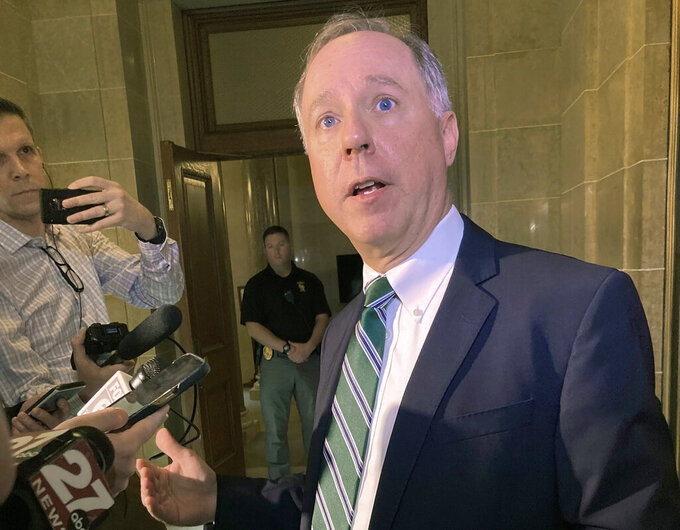 Scott Bauer, ASSOCIATED PRESS
FILE - In this March 16, 2022 file photo, Wisconsin Republican Assembly Speaker Robin Vos speaks to reporters in Madison, Wis. Wisconsin’s Republican Assembly leader who will appoint a key member of the state’s bipartisan elections commission says he is not “ruling anybody in or out” as he looks to quickly fill a vacancy in the battleground state before the next chair of the panel is chosen. Assembly Speaker Robin Vos told The Associated Press on Thursday, May 26, that he intended to appoint someone before the commission’s meeting in two weeks where a new chair will be selected (AP Photo Scott Bauer File)

MADISON, Wis. (AP) — Wisconsin's Republican Assembly leader, who will appoint a key member of the state's bipartisan elections commission, said Thursday he was not “ruling anybody in or out” as he looks to quickly fill a vacancy in the battleground state before the next chair of the panel is chosen.

Assembly Speaker Robin Vos, in an interview with The Associated Press, also refused to rule out the possibility of appointing the embattled investigator he hired to look into the 2020 election.

“I’m not ruling anybody in or out,” Vos said. “I would like somebody who has a long track record of experience and somebody who, frankly, hasn’t bought into hook, line and sinker the decertification argument that is absolutely impossible to achieve.”

Former Wisconsin Supreme Court Justice Michael Gableman, who Vos hired to investigate the election, encouraged lawmakers to look into the possibility of decertifying President Joe Biden's victory but in a closed-door meeting with leadership reported on by the Milwaukee Journal Sentinel later conceded that wasn't possible.

Vos said intended to appoint someone before the commission's June 10 meeting where a new chair will be selected. The commission delayed a vote Wednesday after Vos's current appointee, Dean Knudson, abruptly announced he was resigning under pressure from Republicans who are angry because he believes Donald Trump lost to Biden fair and square.

The next chair will hold the position heading into the November election with Democratic Gov. Tony Evers and Republican U.S. Sen. Ron Johnson on the ballot. They will also be chair in the lead-up to the 2024 presidential election.

The chair by state law approves the vote canvass following elections and certifies results. The chair also sets the agenda for the commission and can exert influence over how questions are framed, an important power on the board that is evenly divided between Republicans and Democrats.

Vos told the AP that he had no litmus test for who he selects, and didn’t have anyone in mind, but he was leaning toward naming an experienced attorney.

“I’m looking for somebody to be a very well-qualified choice that people will look at and say, ‘That’s a good decision,’” Vos said.

He said he hopes whoever he names would oppose dissolving the commission, something that every Republican running for governor says they support. Vos said he has been approached by people who are interested in serving, but he declined to name them.

State Sen. Kathy Bernier, who is chairman of the Senate elections committee, a former county elections clerk and is retiring this year, said she called Vos to express her interest.

“He has not returned my call,” Bernier said. She has been an outspoken critic of Gableman's investigation and Republicans who believe the election was stolen from Trump. Bernier said no one is more qualified than her, but she doubts Vos would select her.

“I know that the Trumpian people will go crazy, but then again they're a minority among Republicans,” Bernier said.

Vos was booed at last week's Wisconsin Republican Party convention when he said that Biden’s victory in Wisconsin could not be decertified. About a third of convention attendees later voted to approve a resolution calling for Vos to resign or be removed from office.

Vos has felt pressure from Trump and the right wing of his party over how he reacted to Biden's win in Wisconsin.

State law requires the next chair to one of two Republican members — either Vos's yet-to-be-named appointee or Bob Spindell. He wants the post, but no Democrat is likely to support him. At least one Democratic vote is needed to elect the chair.

Spindell has taken many positions on the commission that have angered Democrats He was also one of 10 Republicans who cast Electoral College votes for Trump in Wisconsin, even though Trump lost. He and the other fake GOP electors were sued last week.

Knudson said at Wednesday's meeting he was pressured from top Republicans to not run for chair because he wasn't conservative enough. Knudson said Thursday it wasn't Vos who pressured him. When asked if it was Republican U.S. Sen. Ron Johnson, Knudson said: “I think it's always best for you to ask him directly to speak for himself.”

Johnson's spokeswoman Alexa Henning said that Johnson told Vos that “Dean Knudson had lost the confidence of the grassroots Republicans in representing their interests on the Wisconsin Elections Commission.” She said Johnson never suggested he resign.

Despite the findings that the 2020 election was free of widespread fraud, the commission has come under intense criticism from Republicans for a host of decisions it made leading up to the contest.