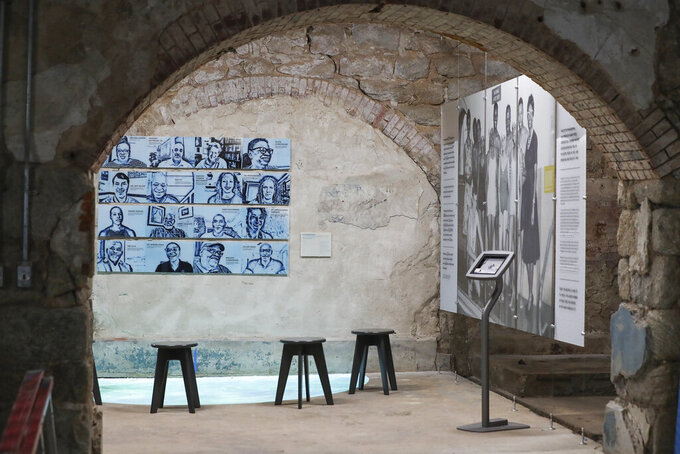 Heather Khalifa, ASSOCIATED PRESS
Interactive features on display for the upcoming "POOL: A Social History of Segregation" exhibit at the Fairmount Water Works Interpretive Center in Philadelphia, Wednesday, Aug. 25, 2021. Curated by artist Victoria Prizzia and featuring the work of nine artists, it is a chillingly honest and informative look at how separate and unequal pools are a key part of the foundation upon which systemic racism stands. (Heather Khalifa/The Philadelphia Inquirer via AP) 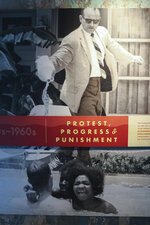 I didn’t experience the joy of water — the calm crashing waves, the confidence of swimming in the deep end, canoeing and rowing — until I was in my 30s. It wasn’t that I was uneasy around water as a child. When I had access to a pool, I’d hold my nose and dive in. I flailed my arms, dunked my friends, and screamed with glee. But for my family, water wasn’t for enjoyment.

My parents couldn’t swim. Beaches were hard to get to. And New York City pools were raggedy. Just playing around in water wasn’t a priority. Because there was always enough water to boil in and bathe in, I didn’t think I was missing out.

I was wrong. Access to water for fun isn’t a privilege, and learning how to swim is a basic life skill. Both were denied to Black Americans through centuries of slavery and discrimination. That legacy is the focus of a daring new exhibit: “POOL: A Social History of Segregation,” at the Fairmount Water Works Interpretive Center through August 2022.

“POOL” was curated by artist Victoria Prizzia and features the work of nine artists, including animators, painters, and videographers. It is a chillingly honest and informative look at how America’s separate and unequal pools are a key part of the foundation upon which systemic racism stands. Segregated pools fostered the lack of access to water in Black communities, and are among the reasons Black children in the United States ages to 10 to 14 are still 7.6 times more likely to drown in swimming pools than white children. This legacy fuels the misperception that Black people can’t swim, are afraid of water, and worse, don’t deserve to experience its joy.

“I wanted to think about my relationship with water and this idea that a segment of the population was excluded from something that gave me so much joy,” said Prizzia, who is white.

It also celebrates Black excellence in aquatics. Longtime Philadelphia swim educators like Jim Ellis, coach of the Philadelphia Department of Recreation Swim Team whose story was told in the 2014 biopic Pride, and Malachi and Olivia Cunningham, founders of the Tiger Sharks Swim Club, are featured in videos digitally enhanced to appear as if they are speaking from under water. Olympians Cullen Jones, the first African American to hold a swimming world record, and Simone Manuel, the first Black woman to win an individual gold medal in swimming, join them at the exhibit’s entrance.

“These artists and leaders in the Black aquatics world take us to places we didn’t expect,” Prizzia said. “We wanted to connect the old history with the new stories because nestled in the pain of the past is a story of hope and triumph for the future.”

It’s timely — and ironic — that “POOL” is opening at the end of a summer when pools in the city’s poorest neighborhoods didn’t open because of lifeguard shortages and maintenance issues. Inequality in health care and city services in predominantly Black neighborhoods and the disenfranchisement of Black people are among the issues addressed in “POOL.”

“At the heart of this story is how important vibrant public spaces are to correcting the failures of democracy,” said Prizzia, who organized each display for visitors to linger. “Public spaces are where the push and pull happens — the pull to keep things as they are and the push to say no, we are not being served the way things are. Business as usual is not good enough.”

Prizzia, 47, has always been sensitive to social justice issues as they relate to aquatics.

She started swimming in her family’s above-ground swimming pool in upstate New York when she was just 6 months old. In 1983, the year she turned 9, she invited a Black boy named Albert to her birthday pool party. Members of her family were chilly towards him. When she asked them why, they brushed her off. That feeling stayed with her.

Fast-forward to 2014, Prizzia, who has produced exhibits at the Interpretive Center, came across historian Jeff Wiltse’s book Contested Waters: A History of Swimming Pools in America. In it, Wiltse recounts the history of segregated pools and its continued impact on American society. “I began to feel a sense of urgency,” Prizzia said. “I didn’t know this history, but I knew there was something I could do about it. The answers were not unknown. We could correct this wrong.”

In 2015, Prizzia presented a proposal that explored the impact of racial segregation at pools on modern society at a museum conference in Pittsburgh. The next year Donald Trump was elected president.

“I saw a floodgate of people being intimidated in public spaces,” Prizzia said. “It was so blatant and it was because of their race. That was the writing on the wall. I got out my old computer, dug up the case study.” A year and a half and two proposals later, the Interpretive Center was awarded a $260,000 grant from the Pew Center for Arts & Heritage to fund “POOL.”

I asked Prizzia: Could a white woman effectively tell the story of Black pain through such a privileged lens? Should she? “The project is a platform to amplify voices of those that aren’t heard,” Prizzia told me. “Elizabeth, I’ve been working hard, reading and discovering who these people are, making connections and building trust. As a white woman, (I know) they don’t have to talk to me. But they did and it was time well spent. I feel like the voices represented in ‘POOL’ are voices we should all hear more of.”

An affinity for water

Prizzia designed the 4,700-square-foot exhibit to be calming. Cerulean floor-to-ceiling banners with quotes from 15 luminaries in African American aquatic history are nestled in graphics hanging at the exhibit’s entrance. An animated projection on the floor moves and sounds like a lake. This, Prizzia says, is the Blue Mind Pool, where four stools are placed.

“I want people to stop, sit here, and listen,” Prizzia said. Above the Blue Mind Pool are a series of videos of historians and athletes explaining why children, especially Black children, need to have access to water for recreation for their mental health.

A 7-foot image of white chrysanthemums, birds of paradise, and banana leaves — flowers that pay homage to the Yoruba goddess of water — is to the left of the projection pool. The vibrant painting is by Calo Rosa, a Philadelphia-based street artist from El Salvador, and beckons visitors to “dive in” to the exhibit.

“We loved the water,” said Rosa, referring to the ancient Mayans and Africans from whom he is descended. “We paid homage to the water and respected it. We weren’t afraid of the power of her glory.”

A pool at the center

The original John B. Kelly Natatorium — fondly remembered as the Aquarium Pool by many of Philadelphia’s oldest residents — is at the heart of the exhibit. The Kelly Pool was one of Philadelphia’s first integrated pools when it opened in 1961. A black-and-white image of Black swimmers there, the females in swim caps and modest one-piece suits, is a part of the show.

The three-lane pool, which closed in 1972, is marked with the old graffiti. The original columns that separated the lanes remain intact. The walls are weathered and cracked. Yet the humidity combined with the chlorine smell, gray lockers that feature video screens instead of combination locks, neon umbrellas, and diving boards staged with ebony mannequins is inviting. And faux water — a digital projection — gives the space a futuristic vibe.

Six-foot panels covered with archival photos serve as a timeline of the segregation of pools. They start in the late 1880s when bathhouses were a part of the urban landscape in cities like Philadelphia. These bathhouses, which were separated by gender not race, would evolve into swimming pools in the early 1900s. And those would become segregated when they reached popularity in the 1920s. “It was unthinkable to allow Black men to interact with white women in such visually, physically, and socially intimate space as a swimming pool,” Wiltse told me.

More panels show how pools were at the center of civil rights movement throughout the 1940s, ’50s and ’60s. Among the panels is the well-known and startling image of James Brock, the manager of the Monson Motor Lodge in St. Augustine, Fla., throwing acid on a group of Black and white teenagers trying to integrate the motel’s pool.

“We purposely shifted the focus to that of the perpetrators,” Prizzia said. “We didn’t want to take away the responsibility of the people who caused the trauma or retraumatize the Black community who are always having to see themselves covered in blood.”

Counteracting the painful images are at least half dozen documentaries and animations by Black artists that depict Black Americans and their connections to pools, beaches, and waterparks. “Everyone I talked to, their first memories of water shaped their lifelong relationships with water,” said Lowell Boston, creator of Water Born, one of the featured documentaries. “And they have lived with these ideas all of their lives.”

“POOL” aims to tell a holistic story about the Black experience and water. Its message is simple: Water is for everyone.

“POOL: A Social History of Segregation, The Fairmount Water Works Interpretive Center,” 640 Waterworks Dr., Sept. 3- Aug. 30, 2022, Thursdays-Sundays, noon to 5 p.m. Admission is free. For more information and to see the art, movies, and documentaries, log on to poolphl.com