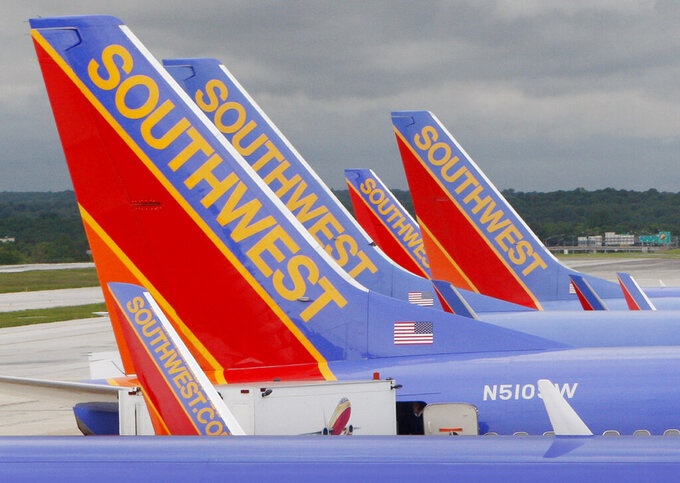 Charles Dharapak, ASSOCIATED PRESS
FILE - In this May 16, 2008 file photo, Southwest Airlines jets are seen parked at their gates at Baltimore Washington International Airport in Baltimore, Md. Southwest Airlines will reduce flights for the rest of the year as it tries to restore an operation that stumbled over the summer and now faces lower demand because of the rise in coronavirus cases. Southwest said Thursday, AUg. 26, 2021 it will cut its September schedule by 27 flights a day, or less than 1%, and chop 162 flights a day, or 4.5% of the schedule, from early October through Nov. 5. (AP Photo/Charles Dharapak, file)

DALLAS (AP) — President Joe Biden and his team are promoting an agreement reached with the U.S. airline industry to cut aircraft greenhouse-gas emissions 20% by decade's end, but the deal might not fly.

In an announcement Thursday, the White House unveiled an array of measures to reduce climate-changing emissions. The administration is also setting a goal of replacing all of today's kerosene-based jet fuel with cleaner or “sustainable” fuel by 2050.

Climate experts say that while the effort is laudable, the administration's approach is aspirational and unrealistic. The targets are voluntary, and robust government support will be needed to offset the higher cost of sustainable fuel — up to three times more than regular fuel.

Airlines in fact have talked up sustainable jet fuel for years and even made small investments in it, but it may prove to be a vision beyond Biden's promised reach. Airline executives have expressed concern in particular that “flight shaming” — famously advocated by Swedish activist Greta Thunberg — could catch on in the U.S. if the companies are seen as uncaring about the environment.

WHITE HOUSE, touting Biden's steps to involve the government, aircraft makers, airlines and fuel suppliers to boost the use of cleaner fuels: The measures “will result in the production and use of billions of gallons of sustainable fuel that will enable aviation emissions to drop 20% by 2030 when compared to business as usual.”

THE FACTS: That's a giant step that will be highly difficult, if not impossible, to achieve.

Only 2.4 million gallons of sustainable aviation fuel, or SAF, were produced in the United States in 2019, according to the Environmental Protection Agency. In contrast, airlines burned 21.5 billion gallons of regular fuel that year. That means just over 0.01% of the nation’s supply currently comes from sustainable fuel.

The airline industry says bridging the gap will require bold steps including grants and tax credits for producers, government support for research, and more. Biden is seeking a SAF tax credit as part of a $3.5 trillion spending bill being pushed in Congress by Democrats, but its outcome remains uncertain. Even with that money, it's not clear all those things would be enough to meet the administration's ambitious goals, according to aviation experts.

“Aspirational goals like this don’t move markets,” says Dan Rutherford, who oversees aviation research at the International Council on Clean Transportation, an environmental group based in Washington.

Without a government mandate or “very strong incentives,” Rutherford says, “I doubt that much SAF will be generated.” He notes that the International Air Transport Association, a global trade group for airlines, had a voluntary goal of 10% sustainable fuel by 2017 and the federal government had a target of 1 billion gallons per year by 2018, “and neither came anywhere close.”

Liz Jones, a climate-law attorney at the Center for Biological Diversity, says the administration plan “largely relies on biofuels aspirations that simply aren’t based on reality.”

Airlines have been announcing promises to become carbon neutral around the middle of the century, and some have invested in sustainable fuel as they defend against criticism over aviation’s role in climate change. Airplanes produce only around 3% of the world’s heat-trapping emissions, but their share is growing rapidly.

Jones says, however, that nothing in the administration's plan would force airlines to live up to their promises.

“And even the best-case scenario doesn’t cut climate pollution fast enough,” she says. "The Biden EPA needs to set strong airplane emissions standards now, not get mired in the myth of sustainable airline fuels.”

Airlines for America, a trade group for the biggest U.S. airlines, had previously set a goal of producing 2 billion gallons of sustainable fuel in 2030. This week, the group agreed to back the White House goals.

The airline group's president, Nicholas Calio, said the airlines “are proud of our record on climate change, but we know the climate change challenge has only continued to intensify,” and so it raised its goal for sustainable fuel.

Airlines are also placing orders and making investments in startups that are designing aircraft powered by electricity or hydrogen. Some of the manufacturers aim to have small electric planes of up to 19 seats in service by the end of the decade.

“We want to operate aircraft that are very good for the environment in the long run," Andrew Nocella, the chief commercial officer of United Airlines, said this week. “How they come to be and when they come to be is still a little bit TBD (to be determined)."