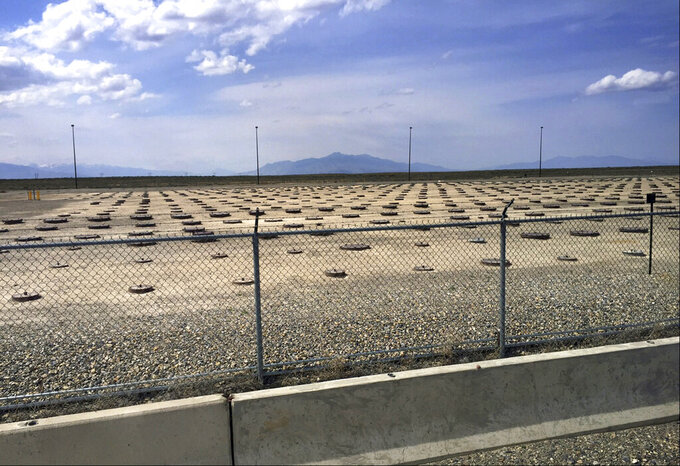 Keith Ridler, ASSOCIATED PRESS
FILE - In this May 11, 2015, file photo, nuclear waste is stored in underground containers at the Idaho National Laboratory near Idaho Falls, Idaho. U.S. officials say problems plaguing a nuclear waste treatment plant in eastern Idaho appear to be solved, and converting high-level liquid waste into a safer and more easily managed solid material could start early next year. Joel Case of the U.S. Department of Energy said Thursday, Oct. 21, 2021, that a test startup without waste will begin next week at the Integrated Waste Treatment Unit at the Energy Department's 890-square-mile site that includes the Idaho National Laboratory. (AP Photo/Keith Ridler, File)

Joel Case of the U.S. Department of Energy said a test startup without waste will begin next week at the Integrated Waste Treatment Unit at the Energy Department’s 890-square-mile (2,305-square-kilometer) site that includes the Idaho National Laboratory.

“I'm very confident that we can fix the actual process issues," he said during a meeting of the Idaho Cleanup Project Citizens Advisory Board, but noted the plant hasn't run for several years, so there could be glitches. “It's now about sustained operations.”

The 900,000 gallons (3.5 million liters) of sodium-bearing, radioactive waste comes from processing spent nuclear fuel to recover highly enriched uranium. The waste is in tanks above a giant aquifer that supplies water to cities and farms in the region.

The waste has been a sore spot between Idaho and the Energy Department for years, Case said, and the federal agency is paying $6,000 in fines a day for missing a deadline to transform the liquid waste into solid material as stipulated in a 1995 agreement that was the culmination of a series of federal lawsuits.

Idaho, because of the missed 2013 deadline, is preventing the Energy Department from bringing in research quantities of spent nuclear fuel to be studied at the lab. Scientists say the spent fuel is needed to develop new technologies for the next wave of nuclear reactors that's part of a U.S. strategy to expand nuclear power and reduce greenhouse gas emissions.

The prohibition could also damage the lab's status as one of the nation's top nuclear research labs, Energy Department officials have said. Additionally, the lab is one of the state's largest employers and a huge economic driver, especially in eastern Idaho.

But Idaho officials have been wary of voiding that part of the agreement, which overall is seen as preventing Idaho from becoming the nation's high-level nuclear waste dump.

In 2019, Republican Gov. Brad Little and Republican Attorney General Lawrence Wasden granted a conditional waiver to the agreement allowing the Energy Department to bring research quantities of spent nuclear fuel into the state if the agency proved the Integrated Waste Treatment Unit could process the liquid waste.

That could happen next year if everything goes according to plan at the treatment plan, Case said. Scientists initially plan to use simulant rather than liquid waste, then mix in 10% sodium-bearing waste. If that goes well, the waste will be increased to 50% and then 100%. Case said once the plant reaches routine operations, anticipated some time next year, it will take about five years to treat all the liquid waste.

“This has been a long journey,” Case said.

The solid waste will be placed in stainless steel canisters, each holding about 35 cubic feet (1 cubic meter), and stored at the site. The canisters will be stored in groups of 16 in concrete vaults. The site can store 745 canisters, Case said, but estimates indicate the waste could fill more than 1,000 canisters. Case said that could mean building more storage.

Another possibility, officials said, is trying to reclassify the solid waste to transuranic waste, which would allow it to be sent to the Energy Department's Waste Isolation Pilot Plant in New Mexico.

“It's (classified) high-level waste because of where it came from, but if you look at it terms of its actual content, it could be something else,” said Connie Flohr, manager of the Idaho Cleanup Project.

The Integrated Waste Treatment Unit cost more than $500 million to build. Officials on Thursday didn't give an updated cost that included delays or additional work to get the plant operating.