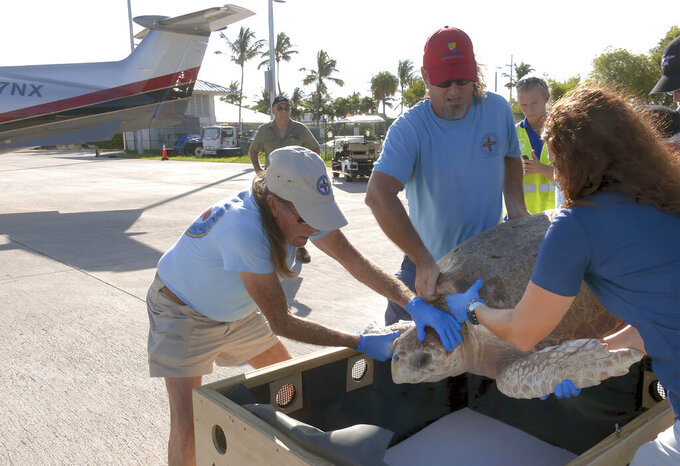 Steve Panariello, ASSOCIATED PRESS
In this photo provided by the Florida Keys News Bureau, staff from the Florida Keys-based Turtle Hospital place a large loggerhead sea turtle into a shipping crate Sunday, Sept. 26, 2021, in Marathon, Fla. Named Matthew, after the person who found the 230-pound reptile, the turtle was flown by private aircraft to a pubic care facility in South Padre Island, Texas, because it can't be released due to a syndrome that prohibits the animal from diving for food.The flight was arranged by the organization "Turtles Fly Too," a nonprofit that engages general aviation pilots who donate their aircraft, fuel and time to provide emergency transportation. (Steve Panariello/Florida Keys News Bureau via AP)

MARATHON, Fla. (AP) — A large loggerhead sea turtle rehabilitated at the Florida Keys-based Turtle Hospital was flown by private plane Sunday to live at a conservation facility in Texas.

The 230-pound female turtle took the nearly five-hour flight from the Middle Keys to South Padre Island, Texas, with the help of “Turtles Fly Too,” a nonprofit group that works with general aviation pilots who donate their aircraft, fuel and time to provide emergency transport for endangered species.

Matthew, named for one of her rescuers before her sex was determined, suffered injuries to her shell in May 2020 from a boat strike that left her unable to dive and forage for food -- a condition termed “bubble butt syndrome” by the hospital’s rehabilitation staff.

“She’s being transported to Sea Turtle Inc. in South Padre Island because she’s unable to dive,” said Bette Zirkelbach, the Turtle Hospital’s general manager, who accompanied the reptile during the flight. “That makes her non-releasable and she will act as an ambassador for her species there at the Texas facility where they see lots of visitors.”

The reptile joins other rehabilitated, non-releasable turtle patients at Sea Turtle Inc., located on the Gulf of Mexico. The organization’s conservation outreach programs are designed to raise public awareness about sea turtles and the threats to their survival.

Although the goal for the Keys’ Turtle Hospital is for every rescued sea turtle to successfully rehabilitate and return to its ocean home, it is not likely Matthew could survive in the wild due to the positive buoyancy disorder.

Matthew’s carapace has been fitted with weights, fashioned to adhere to the shell and help the turtle submerge and rest comfortably during her residency at the Texas center.