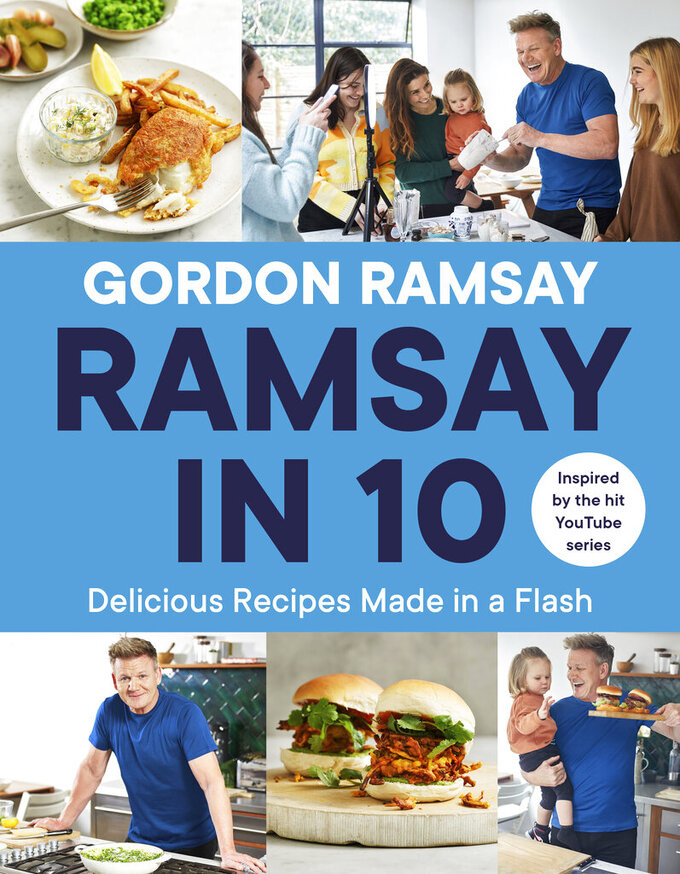 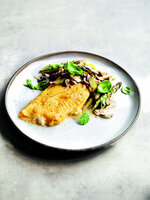 NEW YORK (AP) — How did Gordon Ramsay spend his pandemic lockdown? Getting frenetic in a kitchen, of course.

The chef with a dizzying number of books, restaurants and TV shows was home in Cornwall, England, with mouths to feed last year when he did a series of lives on Instagram cooking meals in 10 minutes or less. The fast-moving endeavor he began on YouTube the year before culminated in “Ramsay in 10,” his latest cookbook filled with recipes made against the clock.

“There's so much fun to be had in cooking food that doesn't need to take 60 or 70 minutes at a time,” he told The Associated Press in a recent interview on Zoom from Los Angeles. “'Ramsay in 10' was a bit of a miracle because it's the first time in 20 years anyone's ever said to me, `Stop. Time out.'”

The world is used to seeing a sped-up — and sometimes terrifying — Ramsay, saving failing restaurants, judging chefs competing for prize money, scaling Sicilian cliffs in search of the perfect octopus. But it's not used to seeing him run around his own kitchen surrounded by his wife, Tana Ramsay, and their kids, ranging from 2 to 23.

The Instagram lives tickled thousands of fans with the rare treat of seeing Ramsay cook in real time.

“No passports. No flights. No schedule,” he said of the shutdown. “You’re not filming. You’re staying home and you’re cooking breakfast, lunch and dinner. If you told me that two years ago, I’d never have believed you. We had to get super creative and go quick and easy and uncomplicated.”

He had the pandemic's strains on families top of mind.

“Every doctor and nurse was on their knees, and every hospital was bursting with anxiety and pressure,” Ramsay said. “And so what I wanted to do was to take that pressure off.”

Among his 100 recipes made in a flash: a humble omelet elevated with mozzarella and shiitake mushrooms, and another with fish sauce and shrimp. There's a one-pan pumpkin pasta with amaretti biscuits and lemon thyme, and a quick smoked haddock kedgeree using pre-cooked rice.

Ramsay filled his book — his 31st — with shortcuts and tips on how to stock a pantry and fridge for home cooks on the go. He calls these recipes fast food at its finest — not quicker than a frozen meal tossed into a microwave but faster than a takeout delivery. And he gives home cooks grace on the clock, acknowledging his status as a seasoned pro.

“The way I used to write cookbooks was thinking I’m going to be judged by every chef on the planet. The recipes were laden with 152 ingredients. Cooking at home is completely different, and I’ve learned that so much more,” Ramsay said.

At home, it's usually Tana who does the cooking.

“She is an amazing home cook,” he said. “That's the first time I've properly cooked at home. It's like running a restaurant where no one went home."

The 54-year-old Ramsay seems ever-present on streaming and TV networks in the U.K. and U.S. With his own production company, the shows keep coming. There's “Hell's Kitchen,” “MasterChef” and “MasterChef Jr.,” “Kitchen Nightmares” and “The F Word,” to name a few. His latest, “Next Level Chef,” is set to premiere on Fox in January with line cooks, home chefs, social media stars and food truck owners competing to be crowned culinary king or queen.

Among his reasons for taking to television as long ago as 1997 was to promote his restaurants. With seven Michelin stars, Ramsay now has 50 restaurants scattered around the world. And he's thankful all survived the pandemic. His latest is due to open at the end of the year in Edinburgh.

Another thing that keeps him on screens, he said, is his lust for discovering new talent. The money ain't bad, either. His net worth has been estimated at roughly $220 million.

Ramsay started out modestly after moving from Scotland to Stratford-upon-Avon as a boy. He washed dishes in restaurants and watched his mom toil as a restaurant cook, with a second job as a nurse. He likens the restaurant world to high-pressure competitive sport, which he caught a taste of as a teenage footballer in England before injuries took him off the pitch for good.

“So at the age of 18, when you're down on your knees, mum always taught me from a very early age, never get bitter, just get even. Dust yourself off and pull yourself together,” he said. “So the escape in food was meant to plop myself in an area where nobody knew who I was.”

He went to France for three years to study the cuisine there, and a career was born.

To relax, Ramsay works out. He swims, jogs, rides bikes and hikes with 2-year-old Oscar on his back. Being fit serves him well in his fast-paced life on TV and at the top of a restaurant empire, he said.

“I think chefs have some of the most unethical eating habits on the planet because we don't sit down and eat properly,” he said.

“My mum was the early influencer in terms of food. We got taught not just to respect food, but not waste it. She always said eat with your belly, not your eyes."