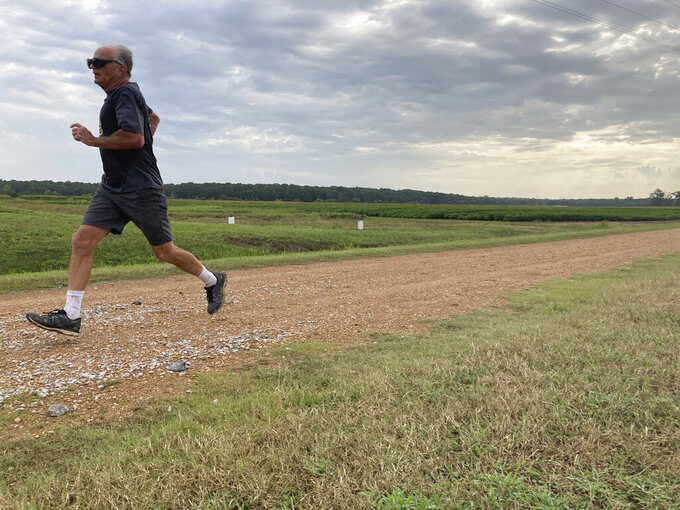 Nicole Bowman-Layton, ASSOCIATED PRESS
Steve Shaffer, a Starkville, Miss., resident and political science professor at Mississippi State, runs Saturday, Aug. 21, 2021, at Mississippi State's North Farm to participate in the Starkville Foundation for Public Education Hannah Pote Run for Education, which was held virtually this year. Instead of holding it on one 3.1-mile course, participants could run the race whenever and wherever they wanted. Shaffer has volunteered as an assistant coach with the Starkville High School cross-country team for 10 years. (Nicole Bowman-Layton/The Commercial Dispatch via AP)

For the past decade, student-athletes have run along Starkville’s streets under the guidance of assistant coach and volunteer Steve Shaffer.

Coach Steve, a Starkville resident, has been a political science professor at Mississippi State since 1979. Since starting, he has volunteered as a coach for the cross-country teams at Partnership Middle School, Armstrong Junior High and Starkville High School.

“It’s funny. I was running on my own with this guy, Joe MacGown, whose son, Joseph was the fastest guy in the state of Mississippi,” he said. “So we’d run on weekends — Joe, Joseph, me and some college guys. Then, Joseph went to Starkville High School and started running there. And I just kind of followed him there and have been here ever since.”

Shaffer hasn’t always been a runner. His fitness journey began 37 years ago, when at the age of 30, he was overweight.

“I had borderline high blood pressure and that really scared me,” Shaffer said Aug. 21, after running the Starkville Foundation for Public Education Hannah Pote Run for Education virtually with the cross-country team at MSU’s North Farm.

“I knew the only way to get rid of it was through a lifestyle change,” he said of the high blood pressure.

Shaffer started his fitness journey by walking five miles a day, which took about two hours.

“You can break it up into one-mile segments throughout the day,” he said.

Eventually, he started adding mileage and time to his workouts and adding hiking to his routine.

“It really is a lifestyle of gradual change every day,” Shaffer said. “You can’t make excuses.”

His current routine includes strength training, mostly body resistance exercises such as push-ups and pull-ups. Shaffer said he works out about two hours a day. About half of that time is spent walking and stretching.

“Again, it’s a lifestyle,” Shaffer said of strength training. “You start … really not able to do many at all, but over the years, you can build up to a nice level.”

Because of his work with the cross-country team, Shaffer works every day at his job at MSU.

The people in the exercise community are what keeps Shaffer coming back, he said.

“Some people like to hike in the mountains or run alone,” he said. “For me, it’s fun being around people.”

As he gets older, Shaffer said he’s found that having a positive mental attitude is one of the most important aspects of survival.

He noted how humans crave to be around people.

“I don’t think our political leaders really thought out the impact of the coronavirus,” he said. “I’ve found as you get older, the most important thing is your mental attitude — your emotional and psychological state.

“When you’re around young people who are optimistic, energetic and they don’t know all the bad things that could happen to them, it just makes you feel good,” Shaffer said.

During practices, Shaffer does a variety of things, but most of them include running.

“If they go into town, I’m going to watch and try to make sure they run safely. They’re usually very responsible, so we don’t have much trouble,” he said. “I also make sure people don’t get lost or get injured. Mainly, I’m just working out, getting my workout in.”

Shaffer said he strives to model a “no man or woman left behind” mentality during practice.

“I do like to kind of be the last one to leave, but of course the coaches do the same thing,” Shaffer said. “They’re the last ones to leave, even after me. They’re good coaches. … And the kids, they’re all awesome.”

“He’s with us all the time,” he said. “He helps us get all the kids in after practice. He makes sure if anybody comes in with a little gimp or a little injury, they’re taken care of.”

“He helps them learn the ropes, learn the course — learn where we’re going and how to get back — every day” he said. “Coach Steve helps us out all the time. He’s a great, great help.”

FITNESS SHOULD BE ADULTS’ PRIORITY

For those who are looking to make a lifestyle change toward being healthy but haven’t taken the leap, Shaffer said it is important not to listen to everyone else, especially those on social media.

“It’s hard,” he admits. “You start really slow, because you’re working all day. Typically, you have kids. It’s really hard to find any time, and your energy is going into your job and your family.

“It’s a struggle to get started,” Shaffer said. “So, I say to just put one foot in front of the other. That’s the hardest thing to do. Just start walking and keep doing it. As the weeks go on, you can walk further, faster. As the years go on, you can even start jogging.”

Adults often put their children or other family members first when it comes to health and prioritizing their time, Shaffer said.

“But you know what? Kids want their parents to live too,” Shaffer said. “You have to maintain and prioritize your health.”