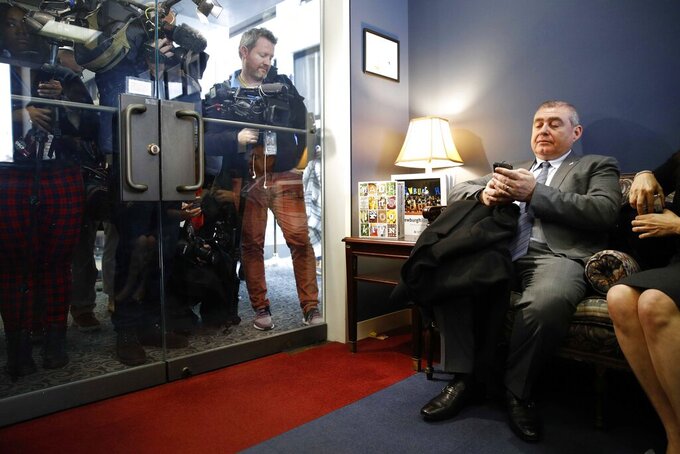 Patrick Semansky, ASSOCIATED PRESS
FILE - This photo from Wednesday Jan. 29, 2020, shows Lev Parnas, right, looking through his phone as he waits in the office of Senate Minority Leader Sen. Chuck Schumer of N.Y. A judge on Wednesday, July 14, 2021 rejected a selective prosecution claim by a one-time associate of Rudy Giuliani who faces an October trial with two others on charges that they made illegal campaign contributions. (AP Photo/Patrick Semansky, File)

NEW YORK (AP) — A judge on Wednesday rejected a selective prosecution claim by a one-time associate of Rudy Giuliani who faces an October trial with two others on charges that they made illegal campaign contributions.

U.S. District Judge J. Paul Oetken made the ruling prior to a trial of Lev Parnas, Igor Fruman and Andrey Kukushkin, on charges that they had a scheme to make illegal campaign contributions to politicians in New York, Nevada and other states.

Prosecutors say they were trying to win support for a new recreational marijuana business.

All three have pleaded not guilty. Messages were sent to their lawyers for comment. Todd Blanche, a lawyer for Fruman, declined comment.

Parnas had claimed the charges against him should be dismissed because he was selectively prosecuted.

He maintained he was targeted because of his national origin, his political affiliation and a government conspiracy to prevent him from exercising his constitutional rights.

The judge wrote that other individuals similarly situated to Parnas were prosecuted along with him, including two who share his national origin. As to the discrimination claim, the judge said Parnas's argument was “not just speculative, but implausible.”

“Parnas asserts that his indictment and arrest were a means to thwart Parnas’s testimony in the impeachment inquiry of former President Donald Trump,” Oetken said. "But the theorizing of Twitters users, and Parnas’s own speculation, do not constitute evidence of an improperly motivated prosecution.

The judge also said the conduct of prosecutors since the charges were brought undermine the selective prosecution argument.

“The Government consented to allowing Parnas to produce documents to the House impeachment committee, and it has not objected to Parnas’s media interviews and television appearances,” Oetken said.

The judge did, however, grant a request by Parnas to allow him to face a separate trial on charges that he cheated investors in a business titled “Fraud Guarantee."

Parnas and Fruman face charges that they made sizable contributions while trying to get Americans interested in investigating Biden’s son in Ukraine. Parnas and Fruman worked with Giuliani to try to convince Ukraine to announce a probe of Biden. Giuliani, a Republican, has said he knew nothing about the donations.

Trump’s efforts to press Ukraine for an investigation of the Bidens led the House to impeach Trump, though he was acquitted by the Senate.