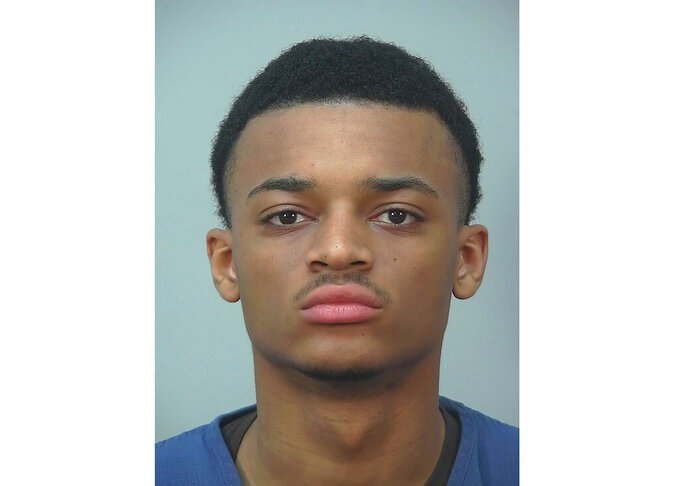 Uncredited, ASSOCIATED PRESS
In this photo provided by the Dane County, Wisconsin Sheriff's Office, Khari Sanford is pictured in a booking photo dated April 3, 2020. Sanford has been found guilty of fatally shooting a University of Wisconsin physician and her husband, who were the parents of his girlfriend, and leaving their bodies at the school’s arboretum. Jurors in Dane County on Monday, May 23, 2022 convicted Khari Sanford of two counts of first-degree intentional homicide for the March 2020 shooting deaths of Dr. Beth Potter and Robin Carre. (Dane County Sheriff's Office via AP)

MADISON, Wis. (AP) — A man has been found guilty of fatally shooting a University of Wisconsin physician and her husband, who were the parents of his girlfriend, and leaving their bodies at the school's arboretum.

Testimony during the trial and the criminal complaint pointed to friction among the couple, their daughter Miriam Carre and Sanford over coronavirus restrictions Potter wanted them to follow in their home in the early days of the pandemic, as well as Sanford’s feelings that his girlfriend’s parents didn’t respect him.

Sanford’s public defender, Crystal Vera, rejected that characterization and said there was no evidence that anyone perceived Sanford as dangerous, the Wisconsin State Journal reported.

“Would parents let their daughter live with someone dangerous?” she asked.

Sanford was accused of kidnapping the couple at gunpoint from their Madison home, where he had recently been living, and taking them to the UW Arboretum, where he shot both of them in the head.

Ali’jah Larrue, Sanford's friend who was with him when the couple was killed, pleaded guilty to felony murder last year.

He testified that he did not know Sanford planned to kill Potter, 52, and Robin Carre, 57, and that he feared for his own safety when Sanford kidnapped the two.

Miriam Carre has not been charged in the case and has testified she knew nothing of Sanford’s plans.

Jurors deliberated for about three hours before convicting Sanford. He showed no reaction to the verdicts, which carry mandatory life sentences. A judge will decide whether Sanford will ever be eligible for extended supervision.