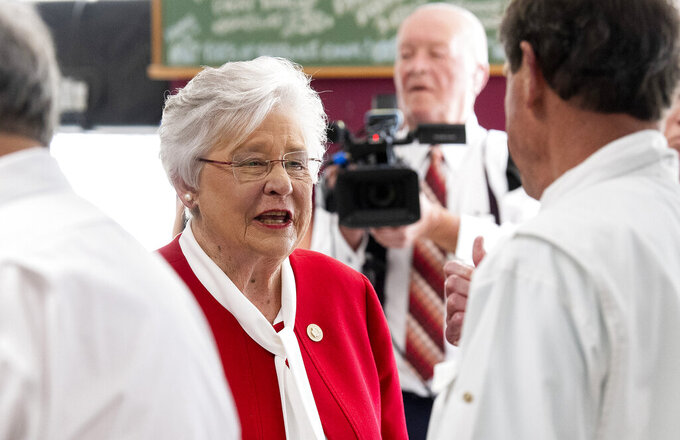 MONTGOMERY, Ala. (AP) — With Alabama trailing the nation in COVID-19 vaccinations, infections rising and the governor refusing incentives to encourage more people to get shots, state prisons are offering $5 canteen credits to inmates to encourage more inoculations.

The Department of Corrections, which said about 65% of its inmates have been vaccinated, is offering the canteen “grab bag” to inmates who get vaccinations and those who've already received shots, spokeswoman Kristi Simpson said.

Items like snacks, candy and personal hygiene products typically are offered to inmates in prison stores.

“Facility wardens (have) also been authorized to provide other incentives to encourage staff and inmates to receive a vaccination at their respective facilities,” she said in an email to The Associated Press.

Nearly all of the latest infections and deaths are among people who have not been vaccinated, health officials have said.

Gov. Kay Ivey has opposed incentives to encourage members of the general public to get shots, saying instead that “common sense” should be enough for people to get the free shots. A spokeswoman didn't immediately return an email seeking comment on the prison incentives.

Statistics from the Centers for Disease Control and Prevention show that only 33.9% of the state's population is fully vaccinated, the lowest in the nation. Questioned by reporters about what more could be done, Ivey sharpened her tone Thursday, expressing frustration that more people weren't being vaccinated.

“Folks are supposed to have common sense,” she said. “It’s time to start blaming the unvaccinated folks, not the regular folks. It’s the unvaccinated folks that are letting us down. ... I’ve done all I know how to do. I can encourage you to do something, but I can’t make you take care of yourself.”

Ivey, who has rejected suggestions that new health precautions may be needed to counter rising illness, did not announce new measures to combat the pandemic, which has killed more than 11,470 people statewide to give Alabama what researchers at Johns Hopkins University say is the nation's 17th highest death count.

“But what we can do is provide accurate information to people who are not yet vaccinated about the risks they are incurring not only on themselves, but also the people around them,” she said.