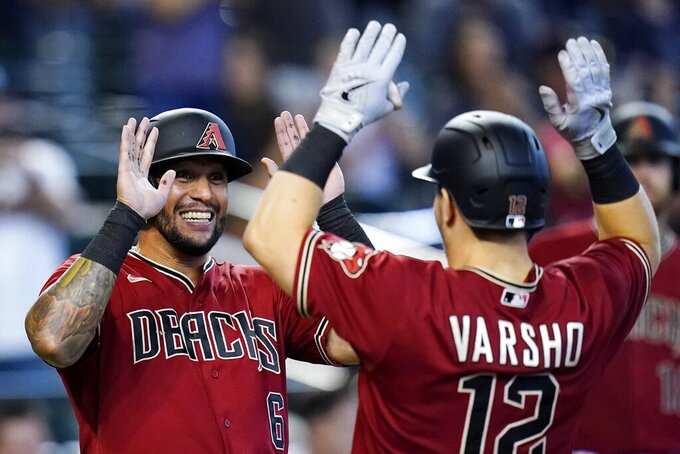 PHOENIX (AP) — Daulton Varsho hit a three-run homer, Pavin Smith had a career-high four hits and three RBIs and the Arizona Diamondbacks avoided a series sweep with a 11-7 win over the Detroit Tigers on Sunday.

David Peralta also had three hits for Arizona, which snapped a five-game losing streak and had 13 total hits Sunday. Varsho's homer was his 10th of the season, and came in a five-run sixth inning for Arizona.

Former American League Cy Young winner Dallas Keuchel made his debut for Arizona after being signed to a minor-league contract on June 6. He gave up six hits and four earned runs in 4 1/3 innings while striking out seven and walking three.

Diamondbacks manager Torey Lovullo said he was surprised before the game when Keuchel, an 11-year veteran, told him he was nervous. Keuchel said that as he was about to throw his first pitch his heart rate “just started skyrocketing.”

“For somebody who’s won a Cy Young I was kind of thrilled to hear him say that because I knew he was ready for this challenge,” Lovullo said. “It was nice to see Dallas get out there. He was attacking the zone ... I’m very pleased with what I saw, the preparation to command the baseball, throw it where he wants to."

But Lovullo would not commit to Keuchel making another start, saying the Diamondbacks need to “evaluate things” first. The Diamondbacks have two days off this week, lessening the need for a No. 5 starter.

Reliever J.B. Wendelken (2-1) got the win for Arizona despite giving up two earned runs in 1 2/3 innings.

Keuchel said there were more pros than cons to his outing. He induced 13 swings and misses but also had to throw 98 pitches.

“It’s way easier to develop a bad habit and keep that bad habit than really shake it or keep up with a good habit,” Keuchel said. “The last 15 to 20 starts have been a whirlwind for me, a lot of roller coaster rides ... There was a lot of great feels today. You don’t get 13 swings and misses just getting lucky. There was great pitch shape outside a lot of uncompetitive pitches.”

Arizona sent eight batters to the plate in the sixth inning. Smith had an RBI single, rookie Buddy Kennedy scored a run with a sacrifice fly and Varsho hit a 1-0 change-up from Vest over the pool beyond the right field fence to score Christian Walker and Peralta.

“The key blow for me was Daulton Varsho's three-run homer,” Lovullo said. “It really gave us a big cushion and broke this game open, but it was set up by quality at-bat after quality at-bat.”

The Diamondbacks grabbed a 5-3 lead in the bottom of the fourth inning on an RBI single by Josh Rojas and a two-run single by Smith off reliever Alex Lange, who had come on in relief of Brieske.

Detroit came right back in the top of the fifth to take a 6-5 lead. Keuchel was lifted after giving up a one-out walk to Riley Greene, and Wendelken walked Spencer Torkelson and gave up a first-pitch three-run homer to Eric Haase.