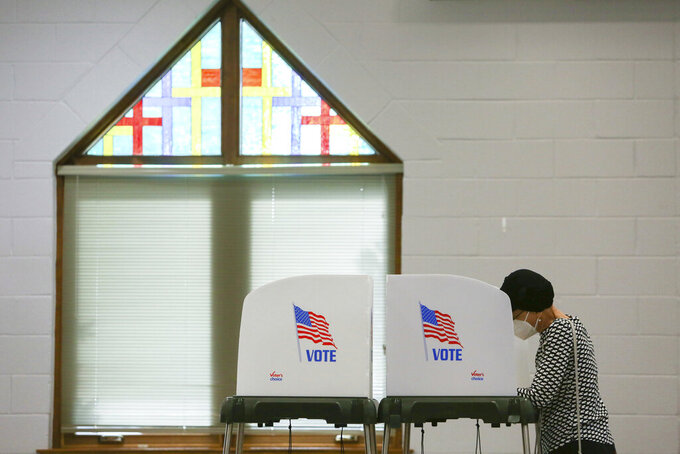 Trent Sprague, ASSOCIATED PRESS
Bernice Kinlock votes at Bayside Presbyterian Church in Virginia Beach, Va., on Tuesday, June 8, 2021, as Virginia holds several primary elections for state and local offices. While the Democratic race for governor has attracted the most attention, Democrats are also choosing nominees for other statewide offices in Tuesday’s primary election. Both Democrats and Republicans are choosing nominees for some House of Delegates seats and local races. (Trent Sprague/The Virginian-Pilot via AP) 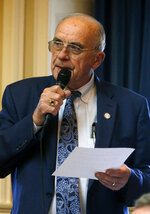 RICHMOND, Va. (AP) — Challengers from across the ideological spectrum ousted or appeared close to defeating a handful of incumbents in the Virginia House of Delegates, including a Republican and several Democrats, in Tuesday’s primary election.

The nomination contests turn the page toward what’s expected to be a hotly contested battle for control of the House in the fall.

Republicans will be looking to wrest control from Democrats, who in the past two years have passed transformative legislation that’s made Virginia an outlier in the South. They’ve expanded voting access, loosened abortion restrictions, legalized marijuana, passed a clean energy mandate, repealed the death penalty and raised the minimum wage.

In an interview, House Speaker Eileen Filler-Corn called it a strong night for her Democratic caucus, which had faced challengers against 14 incumbents.

“It’s going to be our focus now to make sure Virginians are reminded exactly what we were able to accomplish and why it’s important that we maintain the majority,” she said.

“Democrats have nominated a slate of candidates who want to continue the failed policies that have seen Virginia’s national standing diminish over the last two years. The House Republican Caucus looks forward to working with our statewide ticket and House candidates to defeat Democrats up and down the ballot this November," he said in a statement.

Among the Democratic incumbents who lost their House seat was Del. Mark Levine of Alexandria, who was defeated in the 45th District race by challenger Elizabeth Bennett-Parker. Levine had invested hundreds of thousands of dollars of his own money in a campaign for lieutenant governor, which he lost. Bennett-Parker is an established figure in Alexandria politics; she currently serves as vice mayor.

In the 79th District, which covers parts of Hampton Roads, centrist Democrat Steve Heretick lost a primary challenge on his left to Nadarius Clark, a 26-year-old community activist.

Clark said in an interview last month with The Associated Press that he wanted to bring a more progressive voice to Richmond. During the campaign, he criticized Heretick’s votes against bills allowing localities to remove Confederate monuments, ending qualified immunity and banning assault weapons.

In northern Virginia, two of the caucus' most far-left members appeared to concede in tight races that AP had not yet called late Tuesday.

In the 86th District, Del. Ibraheem Samirah, who drew national attention in 2019 for a flamboyant protest during a visit to Jamestown by former President Donald Trump, was trailing challenger Irene Shin.

“We didn’t get the election result we wanted. I am still immensely proud of the campaign we ran,” he tweeted.

In the 50th House District, in the Manassas area, Democratic incumbent Del. Lee Carter was behind challenger Michelle E. Lopes-Maldonado in a three-way race. Carter also ran unsuccessfully in the gubernatorial primary. The two-term incumbent is a socialist who never had close ties with the party establishment.

He tweeted that the job had made him miserable and he was “relieved to say that I’ve done my part, and now it’s someone else’s turn.”

Poindexter had served in the House since 2008, representing the conservative 9th House District, which covers parts of Franklin, Patrick and Henry counties south of Roanoke.

During the race, Williams characterized Poindexter as a career politician and criticized him for not speaking out about alleged voter fraud in the 2020 presidential election, even though numerous officials have confirmed that widespread fraud did not occur.

“I saw firsthand what happens when election integrity isn’t maintained,” he said in a campaign ad.

Poindexter, now retired from a career in information systems technology, is a conservative Republican who has been outspoken against Democrats’ environmental agenda and on bills giving localities the ability to remove Confederate monuments.

In a statement, Gilbert congratulated Williams on his win and thanked Poindexter for his service, calling him a “stalwart conservative.”