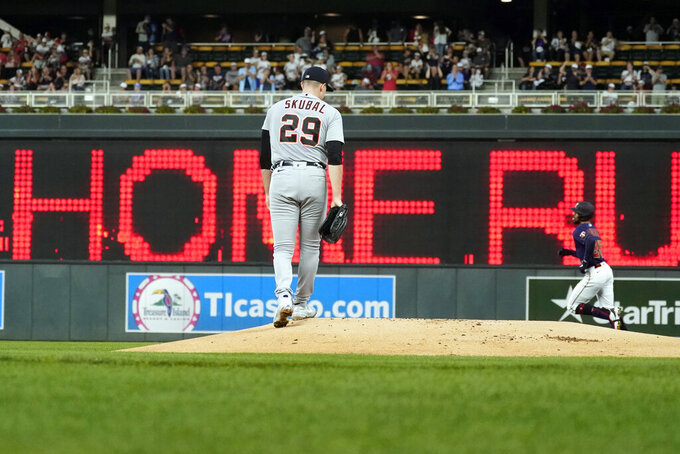 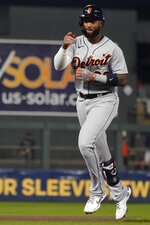 MINNEAPOLIS (AP) — Niko Goodrum homered twice and drove in four runs, Jonathan Schoop hit a solo homer and the Detroit Tigers rallied to beat the Minnesota Twins 10-7 on Thursday night in a slugfest with seven homers.

Alex Lange (1-3) earned the win with 1 1/3 innings of perfect relief, recording two strikeouts. Michael Fulmer allowed a leadoff double to Byron Buxton in the ninth, and earned his 13th save.

Minnesota reliever Ralph Garza Jr. (1-4) walked the first two batters in the eighth inning and gave up an RBI double to Harold Castro. Garza didn’t retire a batter in his outing after the Twins had built a 7-6 lead following Buxton’s second home run of the game.

“I bet he’s wishing there was more baseball to be played this year,” Minnesota manager Rocco Baldelli said of Buxton. “That’s what I bet he’s thinking. For all of us who are watching him play, we’re thinking the same thing. He had it all going for a period of time this year. He’s got it all going again.”

Two promising young hurlers started in the game that evolved into a slugfest.

Detroit’s Tarik Skubal surrendered a solo homer to Buxton leading off the first, and Donaldson connected for his 25th of the season in the third.

“He just didn’t look like he was very crisp,” Hinch said of Skubal. “It (stinks) for him that the season ends that way because he pitched a lot better in September than this last one’s going to feel. Another good, productive progressive season for him ... it didn’t end the way that he had hoped.”

Minnesota’s Joe Ryan, who had struck out the last seven batters he faced in his last outing, had four strikeouts in the first two innings. But Goodrum connected to lead off the third and capped a four-run fourth with a three-run homer.

“From our hitter’s meeting they had where he has good carry on his fastball,” Goodrum said. “So, when they say that, you got to be ready to catch one out front. ... I was trying to be aggressive to the heater he had and put some good swings on it.”

For Ryan, it was his worst start among five in the majors after he was acquired from Tampa Bay at the trade deadline for Nelson Cruz. Ryan had allowed six runs in 22 innings coming in before giving up six runs on Thursday.

“I didn’t have as much feel as I usually do for the off-speed stuff and, yeah, I mean, that’s going to happen and that’s definitely happened before, and you just find ways to pitch around it,” Ryan said. “I mean, it’s eyelashes there. I’m getting into some good counts for me and then just a blooper here, a blooper there and then big hits come together.”

Tigers: OF Derek Hill was scheduled to see a specialist in San Francisco on Thursday to determine the next step with his left knee sprain. The specialist will determine if Hill needs a clean-up procedure or full surgery.

Tigers: Detroit finishes the season on the road against the Chicago White Sox. Wily Peralta (4-4, 3.08 ERA) starts Friday. The right-hander has allowed two earned runs or less in his last six starts. Chicago is scheduled to start Lance Lynn.

Twins: RHP John Gant (5-10, 3.74) will start Friday as Minnesota travels to Kansas City. Gant is 1-4 with a 4.55 ERA in 13 games and six starts with the Twins since coming over at the trade deadline from St. Louis for J.A. Happ. The Royals hadn’t announced a starter.