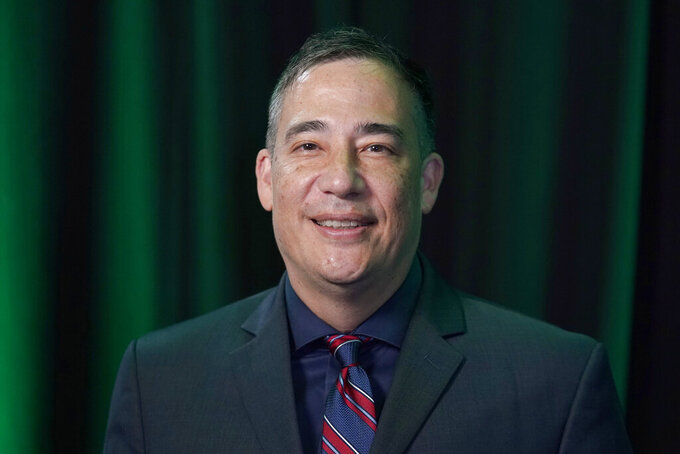 Ted S. Warren, ASSOCIATED PRESS
FILE - Washington Secretary of State Steve Hobbs, a Democrat, poses for a photo before taking part in a debate, Wednesday, Aug. 17, 2022, in Olympia, Wash. Washington voters will soon decide whether to elect their first Democratic secretary of state in six decades or, instead, send a long-time county auditor to be the state's first nonpartisan chief elections officer. Republicans were shut out of the state's top two primary in August, which sent Hobbs and nonpartisan Pierce County Auditor Julie Anderson to the general election. (AP Photo/Ted S. Warren, File)

SEATTLE (AP) — Democrat Steve Hobbs has prevailed in the race for secretary of state, the first time a member of his party has been elected as Washington’s chief elections officer in six decades.

Republicans were shut out of the state’s top two primary in August.

Hobbs, of Lake Stevens, was appointed by Democratic Gov. Jay Inslee last November to replace Republican Secretary of State Kim Wyman after she took an election security job in the Biden administration.

While his appointment marked the first time a Democrat held the office since the mid-1960s, Hobbs had not yet faced voters. This election determined who serves the remaining two years of Wyman’s term.

After Republicans failed to advance a primary candidate, the state Republican party endorsed the write-in campaign of Republican Rep. Brad Klippert, although his name didn’t appear on the ballot. Unlike Wyman, who lauded the state’s election system and security, Klippert echoed election fraud conspiracies and wants to end the state’s mail voting system.

Hobbs, 52, said his experience while in office — including overseeing a statewide primary and two special elections — should give voters the confidence to let him finish the next two years.

Anderson, 57, had been Pierce County auditor for nearly 13 years.

She had touted her endorsements, which included over two dozen county auditors from various political backgrounds, two Democratic members of the state Senate, and former Republican Secretary of State Sam Reed.

In addition to overseeing the state’s elections, the secretary of state’s office also registers corporations and charities and manages the state archives and state library, among other duties.