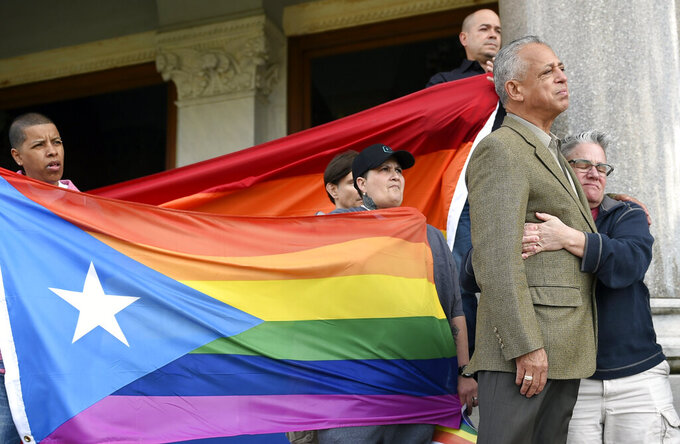 John Woike, ASSOCIATED PRESS
FILE - Former Hartford Mayor Pedro Segarra and Shawn Lang, right, of Hartford, embrace after Segarra spoke Sunday, June 12, 2016, during a vigil organized by the state's Muslim and lesbian, gay, bisexual and transgender communities on the steps of the state Capitol building in reaction to the mass shooting in Orlando, Fla, Holding gay pride flags behind Segarra and Lang are from left, Fioroella Hidalgo, Becky Muniz, wearing hat, Stephen Vetter and Charlie Ortiz. Lang, a longtime Connecticut activist for people living with HIV and AIDS, as well as those impacted by opioid addiction and domestic abuse, died Sunday, Oct. 17, 2021. She was 65. (John Woike/Hartford Courant via AP, File)

HARTFORD, Conn. (AP) — Shawn Lang, a longtime Connecticut activist for people living with HIV and AIDS, as well as those impacted by opioid addiction and domestic abuse, has died. She was 65.

Lang's unexpected death on Sunday , confirmed to the Hartford Courant by her 24-year-old son Corbett Lang, was met with both shock and sadness by friends, associates and Connecticut politicians on Monday. A cause of death has not yet been released.

“Shawn Lang’s passion and courage were boundless, and her impact endless, as a leader and advocate for fundamental human rights," U.S. Sen. Richard Blumenthal, D-Conn., said in a statement. “I am proud to have called her my friend, and like so many other public officials, I valued her sage advice.”

Democratic Gov. Ned Lamont credited Lang with “giving a voice for the underrepresented and those in marginalized communities.”

A resident of Hartford and the former deputy director of AIDS Connecticut, a group she first joined in 1991, Lang worked on state and federal AIDS policy as well as oversaw the group's care, treatment and prevention programs. At just over 5 feet tall with short cropped hair, Lang was well-known at the state Capitol for her passionate advocacy as well as her sense of humor.

She worked for decades on numerous issues affecting the LGBT community and others, such as advancing expanded hate crimes and anti-discrimination laws; meeting the housing and medical needs of people living with HIV and AIDS in Connecticut; and increasing the availability of naloxone or Narcan to prevent opioid overdoses.

Corbett Lang told the Courant that his mother “would always stick up for the weakest person, no matter what the situation was.”

In 2016, nominated by former Democratic Gov. Dannel P. Malloy, Lang was chosen as one of 10 White House Champions of Change for Advancing Prevention, Treatment and Recovery from a field of 900 nominees across the U.S.

A native of Norfolk, Massachusetts, Lang was a graduate of the University of Lowell, a steadfast Boston Red Sox fan and a frequent visitor to Provincetown.