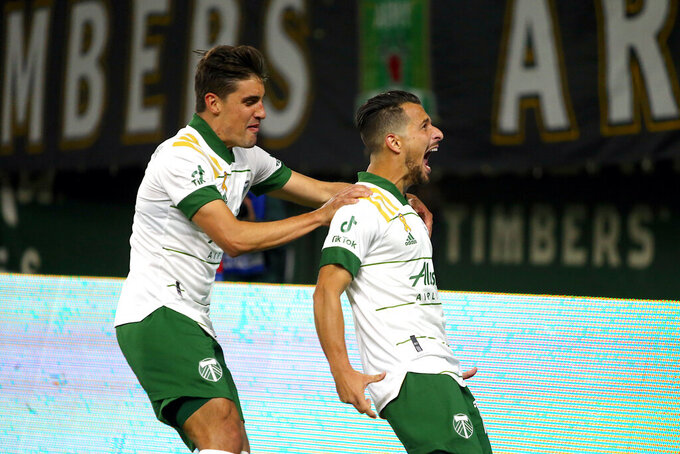 The Timbers (11-10-4) moved into fifth place in the Western Conference and extended their undefeated streak to five games.

Dairon Asprilla had an early goal for Portland. Cristian Arango tied it on a penalty in the first half, his fifth straight game with a goal.

“These were a huge three points, a very important one for us,” Fochive said. “We were home so we owed it to ourselves to push for it. I think we managed the game pretty well, but we needed to win this game. So I think when I came in I was trying to take a little bit more chances, going forward, just putting numbers in there, and then just defending harder than them.”

Los Angeles (9-10-6) had won three in a row. It had an eight-game winless streak this summer to drop to 11th in the standings, but rebounded and went into the game in eighth, just a point back of Portland and Minnesota.

“A hard loss," LAFC coach Bob Bradley said. "I thought our overall mentality was really good, some big chances that we didn’t take advantage of, and in a tight, hard, hard fought game, really would have been important for us to get to 2-1 with the lead.”

Portland went ahead in the 21st minute on Asprilla's header. But a short time later a handball in the box gave LAFC a penalty that Arango buried. Portland's Sebastian Blanco was handed a yellow card for arguing that the ball hit him on the side, not on the arm. It was Arango's fifth straight game with a goal.

Fochive scored his second goal of the season to break the stalemate. LAFC had a chance to tie it again with a dangerous free kick in the 77th, but Brian Rodriguez's kick went over the wall and wide.

It appeared that Felipe Mora added another goal for the the Timbers in the 86th minute, but it was ruled offside after a video review.